World of Warcraft’s players can now re-experience one of the game’s classic encounters and help a time-travelling dragon stop a murder plot against her in the future.

World of Warcraft’s 7.2.5 patch is now live. It adds new content to Blizzard’s massively multiplayer online role-playing game, which has been a money-making powerhouse since it debuted in 2004 with its subscription service. While expansions add a huge amount of content, patches can also bring new experiences for players.

Patches with a full number after them, like 7.2, usually bring the most new content. They’ll add new areas to explore and progress the game’s story in a major way. But Blizzard has introduced the idea of .5 patches along with Legion, Warcraft’s latest expansion. These .5 patches aim to give players substantial things to do, even if they aren’t as big as the .1, .2, etc. content drops.

7.2.5 adds World of Warcraft’s first timewalking Raid. Timewalking is a system that scales up old content for modern players and their powerful gear. Timewalking was only for dungeons before (which support five players), but now you can go back to The Black Temple, a Raid that first appeared in Warcraft’s second expansion, The Burning Crusade.

But the patch also adds new single-player content that has players helping a time-traveling dragon, Chromie, thwart a future assassination attempt on herself. It also brings more micro-holidays, small game-centric events introduced in 7.1.5. This includes The Trial of Style, which gives players a chance to show off their favorite cosmetics.

We got to talk with World of Warcraft senior game designer Paul Kubit about this new content and the challenge of keeping players engaged between larger content drops. Above: A world quest in Suramar

GamesBeat: How do you scale an old raid like The Black Temple to work with modern players?

Kubit: Based on the way timewalking works, it’s not as difficult as it seems from the outside. Timewalking doesn’t change the bosses at all, not really. There are some changes, but when you go into a timewalking raid it’s the players whose levels change. You’re actually changing your character level down to 70, and your item level to somewhere in the 130s or 140s. The bosses by and large stay the same. The combat just works out.

There were some changes that needed to be made for Black Temple to modernize it and build it to be scalable. We learned a lot this time around, about what was required to modernize Black Temple. If it’s something that’s popular and people respond well, if people want to see it in the future, we know what we have to do now, which is a good thing to know.

Kubit: It’s different items, but they’ll use a lot of the same naming and appearances. It’ll be built as timewalking items. They’ll have the actual power of the character level you were when you ran this. If you’re a level 110 character and you come out, they’ll be around normal Tomb of Sargeras item level, which is about 900.

GamesBeat: Why are you guys adding more single-player content to World of Warcraft with this Chromie scenario.

Kubit: It has an interesting genesis. When we were thinking about what we wanted to do for 7.2.5, we knew wanted to add more micro-holidays. We knew we wanted to do the timewalking for Black Temple. And then we knew we wanted something else. We weren’t going to do a fix to Brawler’s Guild, which is what we did in 7.1.5. We wanted something new. Something we’d recently had back-burnered was, we liked Withered Army Training. There were some cool things that happened in there. There were also some areas of opportunity with the tuning. Some things could have been tuned a little bit better there, as well as the way the reward structure worked. We had the idea of building a similar scenario. We were looking for some theme here that wasn’t tied to the Legion.

These .5 patches tend to be a bit more evergreen. The content that comes with them is not necessarily tied to what’s going on in Legion, because it’ll probably be available to play after Legion is done. The theme we came up with was dragons. Not necessarily bronze dragons, but just dragons. We played with the idea of a blue dragon for a while. We had that cool area in Azsuna where Senagos is chilling in the water. We thought we could maybe do something with that cave behind him, where we could blow out the back wall and have this big cave system you could explore with a whelp beside you. And then we got inspired by a couple different pieces of media. There’s Groundhog Day and Edge of Tomorrow, which were two big movies, but there’s also a podcast I was listening to called the Adventure Zone. It’s a D&D podcast. The adventurers go through this chapter in there where they play through the same hour over and over again, and each time they learn a bit more information. I thought, that’s a cool story structure that WoW could do well. We have bronze dragons and we have time, so maybe we can use that idea and build on it in our own way. That’s where that came from.

Even early versions of the Chromie scenario were a little different. She wasn’t saving herself. She was saving another NPC. We played with that being someone like — maybe Thrall is going to get assassinated, or Anduin, or Alexstrasza. We figured out that it felt a bit cooler, and more timey-wimey – a little more endearing – if Chromie was going to the future to save herself. 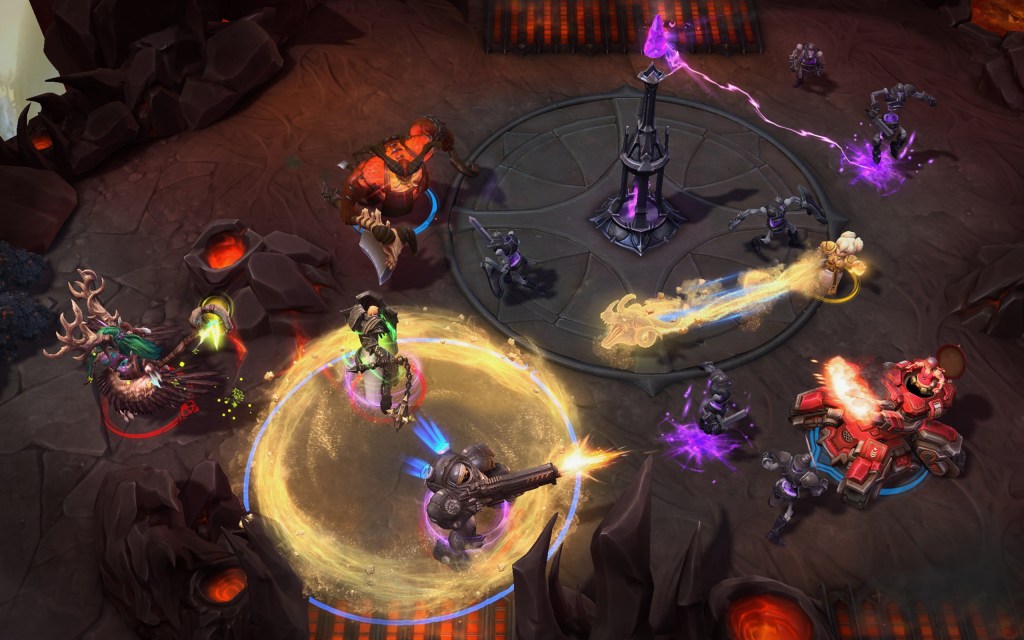 Above: Chromie is also a character in Heroes of the Storm.

GamesBeat: What kind of player rewards will there be for completing the scenario?

Kubit: If you’re able to save Chromie, completely stop the attack so she’s not dead anymore, there’s an ensemble, a gear transmog set. The entire set, from helm to boots on down — there’s actually four of them, one for each armor type. If you’re a cloth wearer, you’ll get the cloth type, and so on. If you want to have all four of them, you can play through the experience on four different characters if you happen to have four 110s who are of different armor types. In addition to that there’s a title, the Time Lord title, which you get for getting Chromie’s reputation to its highest level, which is also called Time Lord. Chromie has a friendship reputation you’ll earn by adventuring alongside her and by doing other things. There’s a couple of pets, battle pets, hidden around inside the scenario.

There’s also a pretty healthy chunk of time-warped badges, which is the currency you normally get from timewalking. There’s a close tie between timewalking and time dragons. It felt like something that made sense. You actually are timewalking when you work with Chromie. You get timewalked up to level 112 and item level 1000. You get a good chunk of those. If you play through the Chromie scenario during a timewalking weekend, you can actually get even more of them.

GamesBeat: It sounds like a lot of content, but we’re pretty far into Legion right now. Is it a challenge to keep players engaged after the shininess of a new expansion has passed?

Kubit: I don’t know if it’s a challenge. It’s always a challenge to make WoW. A lot of things go into it. We have a lot of ideas and a lot of creative designers and artists and other developers working on the team. It hasn’t felt like 7.2.5 was significantly more challenging than others. But I do think this is maybe one of the opportunities where we took our — we loosened up a little bit. We tried a couple of things that are a little different from, here’s a new dungeon, here’s a new questing area, here’s a new raid.

But even with the micro-holidays, which are new — some of the micro-holidays are fairly experimental. The Trial of Style is something that we have that’s basically competitive transmog, transmog PvP. It’s kind of wild to think about, but it felt like something interesting that we wanted to test out and put in front of players to see what happened. How it’s received, we’ll see in a couple of days.

GamesBeat: Do you have a time frame for 7.3 yet?