Dungeons & Dragons is “clicking” with players worldwide in new ways thanks to livestreaming on Twitch, the renaissance of tabletop games, and a fantastic 5th Edition that gets better with every new storyline that Wizards of the Coast releases. The publisher is now looking to Codename Entertainment for the latest D&D video game: Idle Champions of the Forgotten Realms.

Idle Champions is an “incremental game,” which first gained notice with Cookie Clicker in 2013. These have been on a steady rise, as GameBeat detailed in a November 2015 interview with Codename Entertainment on its biggest hit, Crusaders of the Lost Idols (which will serve as the foundation for Idle Champions, which is a separate game). Idle Champions will debut in the third quarter on Steam, Valve’s digital gaming portal and community. It’s set on the Sword Coast in the west of the Forgotten Realms campaign world (where all of D&D’s 5th Edition stories are taking place). It will revisit older storylines (D&D has published Tyranny of Dragons, Elemental Evil, Rage of Demons, Curse of Strahd, and Storm King’s Thunder thus far) along with offering new tales from the recently announced Tomb of Annihilation storyline and other campaigns and events. Two of the heroes you can play are also from Force Grey, a streaming series that focuses on a group of adventurers.

“It is a fun complementary experience to the tabletop world. This game features popular lore, characters, and locations from the Forgotten Realms. It’s an alternative way for discovering and refreshing your existing knowledge about Dungeons & Dragons or the current landscape after the Spellplague,” said Nathan Stewart, the director for D&D at Wizards of the Coast. “The game features its own campaign at launch but then, later this year will feature adventures from the Tomb of Annihilation campaign.”

Codename Entertainment might be one of the best studios for Wizards to turn to for a clicker game. In an email interview, studio CEO Eric Jordan said, “Crusaders of the Lost Idols has been played more than 28 million times [unique sessions]. It has stayed in the top 1 percent of games by current player count on Steam. It’s also one of the most-played games out of more 113,000 on Kongregate.com, and it is consistently ranked in the most popular games on Armorgames.com.

For those who aren’t familiar with clicker games, Idle Champion works like this, according to Jordan, as you click your way through combat and quests:

“The game challenges players to assemble a party of Champions and master the art of formation strategy,” he said. “As players unlock new heroes, upgrade them, and collect unique gear they will reveal each hero’s special abilities. Players must learn how to combine hero abilities to beat ever more powerful monsters to complete each campaign. Idle Champions will feature many campaigns that will take the player on an epic quest throughout the fabled Sword Coast.”

The clicker video game is something new for D&D, which has focused on RPGs like Baldur’s Gate: Siege of Dragonspear, MMOs like Neverwinter, and strategy over the years. Incremental games, though, have a number of RPG elements, so this could be a good fit for the decades-old brand. 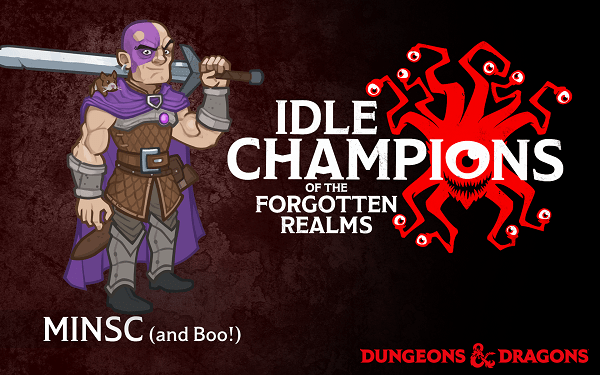 Above: To paraphrase Minsc: Butt-clicking … for goodness!

“Idle clicker games require deep levels of content as part of the design where you upgrade your heroes, collect unique gear, and unlock new Champions. It’s an ideal match with the deep lore and rich D&D universe,” Jordan said. “On another note, Idle Champions is the perfect complementary experience to the tabletop roleplaying game. The game features fans’ favorite lore, characters, and locations from the Forgotten Realms. It’s an excellent resource for discovering and refreshing your existing knowledge about Dungeons & Dragons.”

The addition of Force Grey to the character roster isn’t just something for lore-crazy fans — it also enables Codename to mine the livestreaming audience.

One way we are tapping into the growth of D&D is by including Force Grey characters in our game (we are revealing which of those characters we have included in Idle Champions over the next few weeks).

“The aim is to bridge the gap between players’ love of the tabletop role-playing adventure and provide them with another way they can continue their fandom in a parallel way.”

Now it’s up to Codename Entertainment to see if D&D fans will “click” with Idle Champions.

Update, 11:08 a.m Pacific: We’ve added a comment from Nathan Stewart of Wizards of the Coast.