I’ve finally found my Hearthstone Arena groove — just in time for everything to change.

My favorite mode in Blizzard Entertainment’s market-leading card game is Arena, where you pick from three classes and build a 30-card deck with random cards. It’s a new challenge every time, and each deck you face is different — providing much more variety than what you find in Hearthstone’s constructed ladder or casual modes (which is overrun with competitive decks as people test them before going to the ladder). And on top of facing a wider variety of decks, Arena also has its own metagame environment that differs from constructed — and it’s a puzzle that’s often far more difficult to solve than on the competitive ladder.

You see, it’s all about balance.

Until Mean Streets of Gadgetzan drops, the Arena is in a “vanilla” state. This means no cards get an offering bonus when you’re making your deck. When Blizzard releases a set, it gives that new set an increased percentage chance (up to 50 percent) of class cards showing up in your draft choices. This can make the Arena meta oppressive, especially when it’s a small set of cards from an adventure — like One Night in Karazhan, when the Mage’s Firelands Portal (a spell that deal 5 points of damage and summons a random 5 mana minion) took the brunt of being the card players hated seeing the most.

But in a “vanilla,” or balanced, meta, no sets have a bonus. All cards in the Arena — Blizzard said nearly 950 before Mean Streets of Gadgetzan releases tomorrow — now have the standard rate of appearing in the draft (with commons showing up more often than rares, epics, and legendaries). This gives skilled players a better chance of building decks that emphasize the keys to Arena — outvaluing your opponent, a strong mana curve, and consistent cards — and keeps a cap on the strong class cards from smothering the meta.

This has been especially true in this in-between meta following the adjustments Blizzard made to the Arena, thinning the draft pool by removing a number of lackluster cards from every class but Paladin. And I’ve seen it in my Arena records as well. 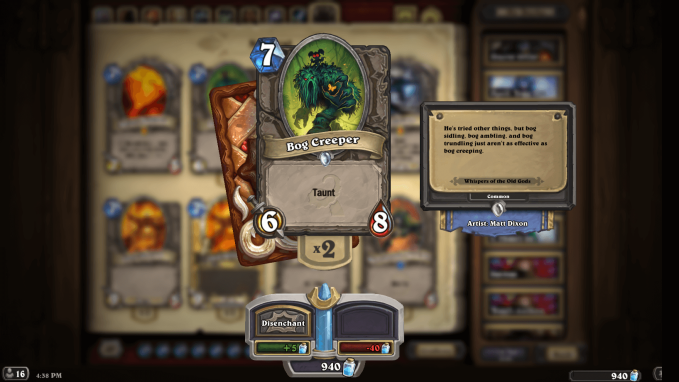 Above: My Arena nemesis.

Before Whispers of the Old Gods arrived on April 26, I was consistently winning 5-to-7 games for each Arena run. Sure, I’d have some turkeys — especially when I played Warrior, which was then the weakest class in Arena, or Rogue (I’ve never been comfortable with this class). But this changed once Whispers released. My Arena performance tanked — and tanked hard.

In what’s known as the “Taunt meta,” when neutrals like Bog Creeper (a 7-mana minion with 6 attack, 8 health, and taunt, a keyword that gives the card what’s essentially a shield that protects its board and hero’s health until you destroy it) and Pyscho-Tron (a 5-mana taunt minion with 3 attack, 4 health and divine shield, which makes it invulnerable to the first attack against it) dominated, I struggled. I never seemed to get a chance to draft cards that gave me a late game to deal with those big taunts. My win rate plummeted — to less than 3 wins a run. It was frustrating, and no matter how many times I listened to The Lightforge podcast and hosts ADWTCA and Merps (they both stream here) or watched skilled players like Hafu or Shadybunny on Twitch, I never gained a grasp on the meta.

But after the Karazhan offering bonus and the adjustments to the card pool, I find myself rebounding. Part of this is because building a deck with a good number of “2 drops” (that’s what the community calls cards that cost 2 mana) has led to higher win rates in this meta, and I’m more comfortable playing such decks. Another aspect that’s help me is with such a large card pool, I no longer feel that I have to play around cards — like the Mage’s Firelands Portal or Flamestrike at 7 mana (both of these can swing the board out of your favor when played against you).

Here’s example of how my last seven runs have gone:

This gives me a win rate of 4.9 games per Arena run over the last couple of weeks, which is significantly better than what I’d had since late April. I’d even had a few 7-win runs before I started tracking this more closely, including one that matched my all-time best of 8 wins. This gives me a great deal of confidence that, even if I never get a handle on the meta for Mean Streets of Gadgetzan when it drops tomorrow, I know I can bounce back once the offering bonus disappears. 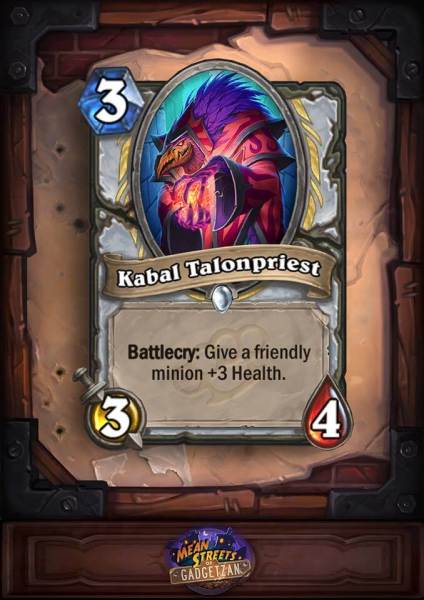 Above: The Kabal Talonpriest is going to be a boon for the Priest — especially in Arena.

What will the Mean Streets of Gadgetzan hold?

I’m cautiously optimistic on how well I’ll do with the new Arena meta once the expansion drops tomorrow. A couple of classes should get a significant boost with the set — especially Priest (my favorite class, and the one I’m most confident in all-around play these days), which could rocket from the bottom and into the top 3, if some Arena observers are correct, thanks to cards like Mana Geode (a strong 2-mana drop that summons a 2/2 crystal every time it’s healed) and Kabal Talonpriest (a 3-mana 3 attack, 4 health minion that gives another minion 3 health), giving it a strong early game, and Dragonfire Potion, a 6-cost spell that deals 5 damage to all minions except Dragons.

I do know that regardless of how poorly or how well I play, I’m still going to enjoy the Arena and give it a go four-to-six times a week. Not only is it a great way to build my card collection (even if you go winless, you get a pack of cards), I’ve found it’s an outstanding opportunity to learn about other cards and deal with situations you’ll never see on ladder.

We’ll see if my mood changes after back-to-back winless runs.