Of any professional fraternity, the bond between indie game developers is fierce. Whether sharing stories, suggestions, and solutions at meet-ups or simply offering moral support, help is easy to find. But where time-taxed indie devs can struggle is in the nuances of the business: promoting, marketing, and selling games, and generating attention from the games media.

Having experienced these issues first-hand as ‘Creative Domepiece’ at Interabang Entertainment, Justin Woodward recognized an opportunity to help. With MIX already in development as a source of support and promotion for indie developers, Woodward met long-time games industry marketer, Joel Dreskin. Motivated by the notion that the support mechanism that Woodward championed could be expanded to a larger footprint of indie game developers, MIX took its next steps.

“We just wanted to leverage our expertise and knowledge of the industry so that we could help all indie studios,” says Woodward. The outcome of this meeting and further discussion is the Media Indie Exchange (MIX) of which Woodward is Co-founder and Principal and Dreskin is Principal.

Stories about success and failure, exultation and heartbreak, blood, sweat, and tears are littered across any collection of stories about indie game studios. Well, game development in general, truth be told. But for commonalities, they pretty much all start with a dream, even if it’s not well fleshed out.

They also often begin with just a handful of passionate folks sharing a vision. Since most teams understand what others are going through in pursuance of their dreams, an incredibly strong bond of fraternity has emerged. Often part of a similar demographic, with familiar skill sets and challenges (and, quite possibly, collective emboldening to “stick it to the Man,” “we’ll show [insert whoever chose not to support or fund a project]” or simply “you like beer? I like beer, too. Let’s go drink beer and talk”) indie developers are happy sharing tales among themselves.

In these early, pre-MIX days, leading games media outlet IGN supported an incubator on its premises for indie developers around 2012, where Woodward was building Super Comboman, and figuring out how to generate press awareness from the belly of the games media beast.

“I ended up asking where we could hold an event, where we could show the game to press,” says Woodward. A supportive IGN knew what motivates the games press aside from coming to see great games. “So we ordered a bunch of appetizers, we ordered kegs, and we brought in a bunch of tables…and tons of press came,” he adds.

It was the early stages of the concept of an indie open house that would become a special event for showcasing games to press. Establishing a location and providing signage made it look rather impressive, and despite feeling like a special underground club, the open houses became popular. 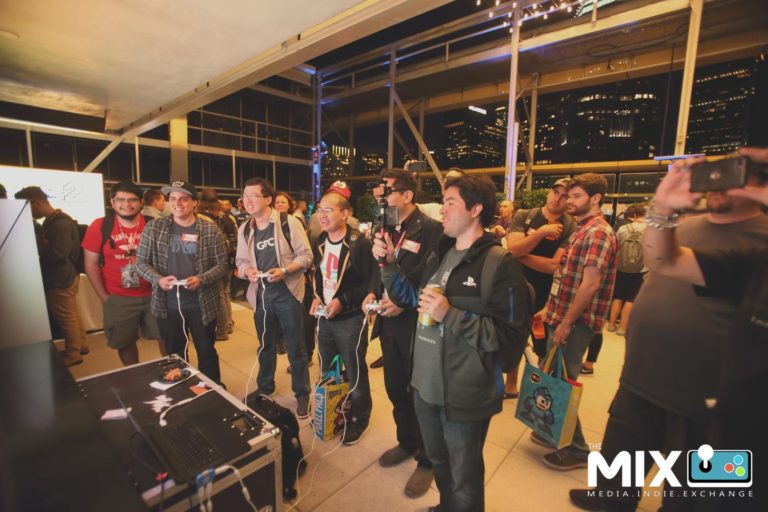 Above: Meet and greet with press and peers at E3 to showcase top indie games.

“The whole idea was simply working with different devs and publishers to create a really great networking event,” says Woodward. Interested parties like the major platform publishers Sony, Microsoft, and Nintendo, were also included along with others looking to find talent and quality games, or simply support this collective goal.

“Press continues to be the main focus,” says Dreskin, “and that includes streamers as that’s the way coverage of this space is going. But also publishers and channels like Humble Bundle, Valve, and others…all as a method of providing opportunities for networking and building relationships.”

The MIX event at E3 saw some 55 games on display, providing the basis for this meet-and-greet setup to allow the formation of valuable partnerships. The games are also judged by a panel of experts pulled from around the games industry, which can help given an awareness boost to the top games on display. It also adds simple confidence as the games are voted on by peers and experts.

“We’re now doing five or six events a year, with our first one at PAX, and given the nature of that, we’re doing a press-only first hour!” says Dreskin. Support has come from companies like Intel, Gamemaker, Unity, and others “which is great to have companies who simply hope that small developers can succeed,” he adds.

The dominance of the Unity engine and Unreal engine becoming free has been integral to lowering the barrier-to-entry for developer dreamers to take steps down that path. “But with all these tools like Unity, Gamemaker, and Unreal, it can also lead to an over-saturation. Due to the rigorous hours, most small studios didn’t have time to do the press outreach or even communicate with publishers,” says Dreskin. MIX events help solve many of those challenges by putting all the right people in one room at one time.

Adds Woodward, “we’re even conscious that a lot of developers are introverted, so we’re creating an atmosphere that is safe, and not as crazy as something like a PAX.”

The altruistic goal of MIX is simply to provide developers with an avenue to succeed. “There is a style to the games industry and how it needs to be managed, and if you don’t understand it, it’s hard to know where to look for advice,” says Woodward.

MIX handles all the logistics of event space setup, signage, inclusion on the website for low costs that recognize budgetary limitations for most small studios. A one-time per year fee of $30 is required for a game to be submitted for consideration (see the FAQ and contact the MIX folks for more details).

“We just want to help developers succeed in this challenging space,” says Dreskin.

So say us all.

Get advice and find out more about the many MIX events. And see a list of latest events.

More details on the logistics can be found here.