Jump is hopping on an opportunity to offer high-quality indie games with a subscription service that focuses heavily on discoverability. It’s launching today with a library of 63 hand-selected titles — role-playing games, racers, multiplayer brawlers and more. The monthly fee is $10 to stream an unlimited number games, and every month, it will add 10 new titles to its catalog. It runs on PC, Mac, and Linux, and because its billing is through Stripe, it’s available in all countries that accept that form of payment.

The urge to compare the service to Netflix is irresistible, something that CEO Anthony Palma acknowledges with a caveat.

“We try to say we’re a mashup of Netflix and Spotify, because Spotify focuses a lot on curation and community,” said Palma in an interview with GamesBeat.

Part of that community-based focus means keeping the interests of indie developers in mind. While in beta, Jump invited developers and players to a private Discord chat server to troubleshoot the service and discuss what issues were pertinent — such as marketing and discoverability. Palma says that part of the strategy is to only add games incrementally so that existing titles on the platform don’t get drowned out. Every game that’s added will be featured for a week on the top banner on the homepage. And Jump’s recommendation engine is meant to resurface titles based on players’ preferences, habits, and even hardware capabilities.

“We are never going to be taking games off as part of a rotation,” said Palma. “It’ll be an ever-growing library of content. What is important too is we’re not going to bury games. I was talking about how we serve them up through the recommendation engine and a hundred other feature ideas for Halloween themes and whatever else to spotlight games again.”

Jump isn’t meant to replace Valve’s Steam platform, which dominates PC game sales. Instead, it presents itself as an option for developers who have started seeing diminishing returns after their initial launch. When that happens, they can offer their games on Jump for a revenue share. 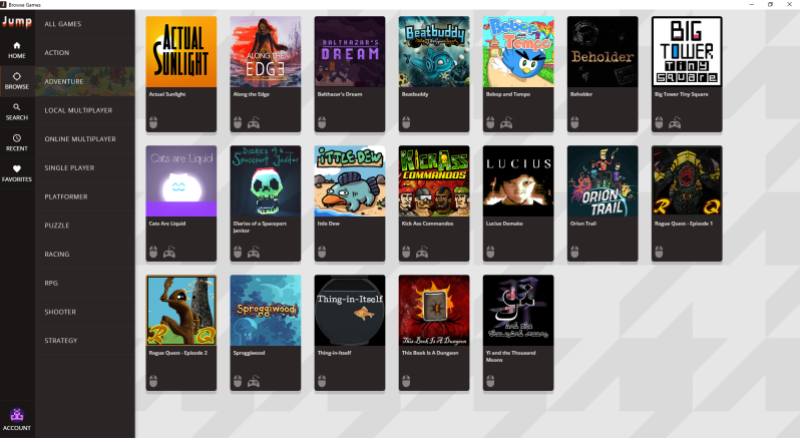 How does Jump pick its titles? A large part of it is Cade Peterson, Jump’s vice president of content and community. Another part of its strategy is what Palma calls “objective pillars” that guide the selection process.

“The first is that they’ve won an award – IGF, IndieCade, anything like that,” said Palma. “The second is they were runaway hit sellers, just sold a whole bunch of copies and people love that game. The third is if they’re highly rated in general, 7/10 or higher on Metacritic or Steam or whatever. And those are really easy for us to follow.”

Having such high admittance standards is the direct opposite of Steam, which recently axed its Steam Greenlight program and replaced it with Steam Direct. With the new system, Valve will no longer manually moderate game submissions and the community will no longer vote on which games will be greenlit. Instead, virtually anyone can pay a fee and fill out a form and get their game on Steam. It’s a decision that some have said will only contribute to issues such as the prevalence of low-effort games as well as discoverability as the store is flooded with titles.

Jump’s extremely selective approach isn’t its only deviation from Steam. While user reviews are an integral part to the Steam shopping experience, none of the games in Jump’s library will have any reviews or ratings.

“It’s just objectively—here’s the game content, here’s the play button, if you want to check it out it’s right here, no purchase required,” said Palma. “You might as well just check it out. We didn’t think it would benefit if people could put user reviews on that page.”

Mike Fischer, a member of Jump’s advisory board, likens the experience to channel surfing.

“I love the fact that there’s that discovery aspect to it, that you can try a game—you can download a game, try it, and then return it within 24 hours if you don’t like it, but there’s still a lot of friction in that transaction,” said Fischer. “I like being able to click, click, click until you see something you like.”

Fischer’s an industry vet — he was the head of publishing at Epic Games, CEO of Square Enix’s U.S. arm, and product manager at Sega America, to name a few of his positions. And he’s not the only vet that’s on board with Jump. He’s joined by others, like Tom Kalinske, the former CEO of Sega America; and Louis Castle, a cofounder of Westwood Studios and head of Amazon Game Studios Seattle.

The way Fischer views it, a subscription service like Jump is not only the way of the future, but complementary to the way people are currently consuming media.

“There’s definitely an organic trend across all kinds of media toward subscription services, all you can eat services,” said Fischer. “But that’s not stopping people from going to movies or watching programs on HBO. I don’t think that it’s a zero-sum game. It’s a case of a rising tide raising all ships. What I like about [Jump], first, it’ll allow some new games to get discovered.” 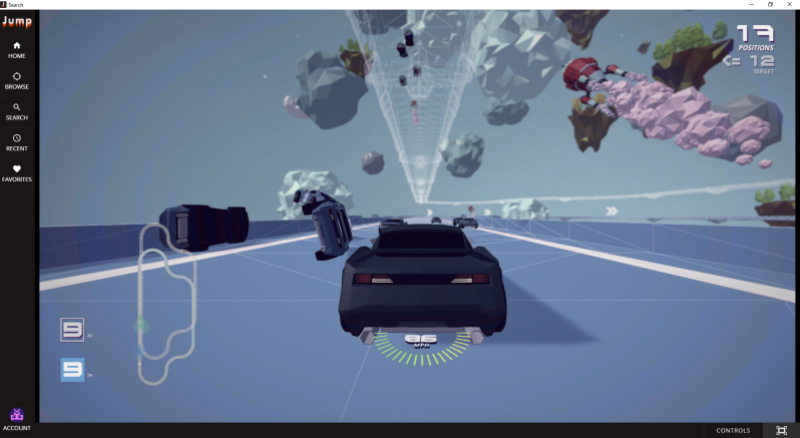 Before founding Jump in its first incarnation, an in-browser store for cross-platform games called Boondogl, Palma created the now-defunct indie studio Kermdinger Studios. They developed two games, Illumicube and Stunt Runner — which is one of the debut titles on Jump. Afterward, he ran an accelerator for indie studios for GSV Labs. His experiences gave him a perspective into the challenges facing indie developers.

“We had always seen the issues indie devs struggled with and wanted to be able to fix that, but also we saw a huge opportunity to build the Netflix for games type subscription service that didn’t exist,” said Palma. “Access across all your devices, as much as you want. The two converged into one idea.”

For Fischer, a confluence of events spurred him to make the jump from triple-A to indie. While he was at Epic, he saw that engines like Unity, Unreal, Lumberyard, and others were making it easier than ever for more people to make a wide variety of games. He was also inspired by the fact that indie games don’t require huge marketing budgets — needing to pay for a TV spot during the SuperBowl, for instance — and that new distribution channels were making it possible to publish and distribute games that didn’t fit neatly into any particular genre. Since leaving Epic, Fischer has co-founded CloudGate Studios (The Brookhaven Experiment) and Hero Machine Studios (Kinetik).

“I think there’s a renaissance right now of creativity,” said Fischer. “Sure, the majority of games probably don’t make a profit and never will. But the variety of games and the level of creativity that’s being infused into games is happening just at the time the big triple-A franchises are basically paralyzed. They can’t innovate.”

Palma and Fischer both note that one of the bonuses is that they think Jump can help the indie community by providing another revenue stream. And that’s a good thing, because there’s a variety of great titles out there that aren’t getting in front of people.

“It’s definitely a way for us to help support the community, and to showcase some great games,” said Palma. “There’s some amazing stuff out there. The biggest complaint we see from users is they don’t know of any good indie games other than the couple they’ve heard of on mainstream sites. There’s hundreds of others they’ve never heard of that deserve to be played.” 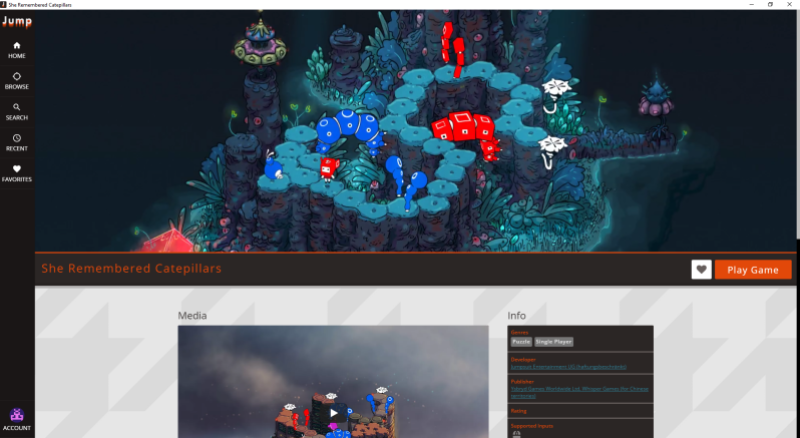 At launch, players will need an Internet connection to play games on Jump. Palma says this is mainly to protect the developers from theft.

“We have our developers integrate these five lines of code, 10 minutes or so, so it’s always pinging our servers and they can make sure the game is only being played inside of Jump,” said Palma. “If somebody were to try to steal the code and run it outside of Jump, it wouldn’t work. But it does mean they have to be online for now.”

In the future, though, Palma says they’re planning on an offline mode that will enable users to download a game for 30 days. They’re also working on some more social features, like friends lists, as well as a deeper Twitch integration for streamers and availability for more devices. Jump is launching on PC, Mac, and Linux, but the team is working on a version for mobile devices and smart TVs. When those versions are live, they’ll be adding games with more native controls to the library, such as touch-based games or more controller-based games if they launch a smart TV app.

“Indies will always be at the forefront of what we’re doing,” said Palma. “That’s important for discoverability for them. They’ll always be in the top banner with everyone else. But we’ll be exploring any type of game, because our technology can run anything from the ’80s to now. You can take that as a hint as to what we’re looking at for future content in 2018.”

In addition to new features, Jump is considering a possible accelerator program in the future, especially since Palma has experience in that space. Right now, they do offer some financial support to help developers port their games. They’re also trying to actively court the indie community. Recently, they sponsored the Indie Megabooth at PAX West and they’re also sponsoring the upcoming IndieCade event.

Down the line, Jump may also be open to hosting games exclusively, but right now, Palma says that they don’t have the ecosystem to support developers who would want to eschew Steam for Jump.

“We’ll look at exclusives later in our life cycle,” said Palma. “We have a rough timeline in mind. But we need it to be good for the developers. We’ll need to grow our user base before we’re able to make it more worth it than going to a premium store first.”