In December, the world’s first exhibit of lesbian, gay, bisexual, transgender, and queer (LGBTQ) digital games history will open at the Schwules Museum in Berlin. This exhibit will cover the 1980s to the present day, include playable games, and showcase mainstream and independent development, LGBTQ game communities, and key themes from this part of media history. As curators for the exhibit, we have spent over a year finding the best way to synthesize nearly 40 years of technical and industry shifts, as well as community and cultural changes.

However, perhaps the most pressing issue we have faced in terms of putting together this type of exhibit is the perennial problem of the ephemerality of digital content and the resultant loss of very recent cultural history. Here we offer a some specific examples of how we plan to represent it within the limitations of the materials available to us.

One core theme of the exhibit is silences, or absences in LGBTQ game history. In part this stems from the harassment LGBTQ players and designers have faced, which leads them to disengage from games culture. We have been contemplating how best and ethically to showcase work that was ultimately taken down when creators were hounded out of games writ large or the people who never participated in digital games for fear of harassment.

A related issue, however, is the ephemeral nature of internet-based game communities. There is an archived Usenet chat from 1997, showing people using gaymer (gay gamer) to describe themselves, though not all such chats are similarly archived. Gamers Experimentations, possibly the first specific forum for gay gamers, started in 2002 but by July 2006 it was put on a hiatus. Gaymer.org began in 2003 but shut down in June 2013 following a legal battle with Reddit’s r/gaymer and the Electronic Frontiers Foundation over the site founder’s attempt to trademark the word “gaymer.” GayGamer.net started in July 2006, but as of May 2016, the site has been inaccessible. Lesbiangamers.com similarly started in 2007 but by March 2016 was no longer available online. 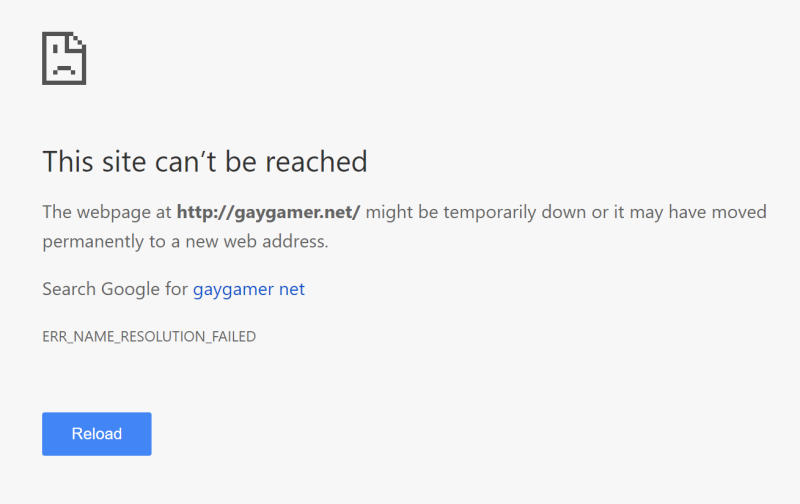 Above: Gaygamer.net no longer exists

All of these sites are partially archived by the Internet Archive, so we can show screenshots from their active days in our exhibit. However, as they were not (relatively speaking) heavily trafficked sites. the archives of them available through the WayBack Machine are incomplete and missing a lot of the forum and article content. Most of these communities shifted to other platforms, like Reddit, Tumblr, and Facebook; however, the loss of these and earlier online LGBTQ spaces does dramatically impact the kind of historical research we can do and display.

A new trailblazer every year? 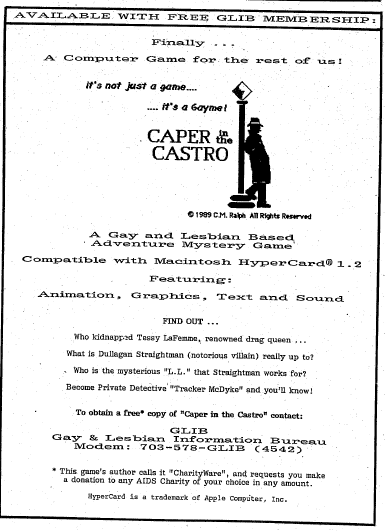 Above: An ad for Caper in the Castro, explicitly calling it a gay and lesbian adventure

Related to that lost recent digital history, a second core theme of our exhibit is questioning the treatment of every “new” example of LGBTQ game culture as inherently groundbreaking. Indeed, the research for this exhibit actually demonstrates more similarities overtime than one might initially expect. While a lot of examples from older games would be considered to be crude or mishandled by contemporary audiences, they demonstrate that relatively progressive instances of LGBTQ representation in video games did exist in some form even during the late ’80s and ’90s. Although it remains important to challenge the past and present video game industry on questions of stereotypes and representation, the exhibition will stress that LGBTQ content is not “new” to digital games.

Moreover, although there has been a recent boom in independent digital game development, thanks in part to the expansion of free game design tools and distribution platforms, indie games have existed as long as the medium has. Though many histories have been written about the mainstream games industry, however, much less has been written about the pre-2010s smaller-scale independent development and even fewer of those games have been saved for posterity. LGBTQ indie game history, in particular, is remarkably hard to find as it seems to have been largely ignored by both the mainstream and LGBTQ community presses, with a few rare exceptions.

Our exhibit will feature various games produced by independent designers from the past decade, but we are using our collaboration with the LGBTQ game archive to ensure we can also highlight examples from the earliest days of gaming. For example, it was only because of a 2014 article, found during the early stages of the LGBTQ game archive research, that the 1989 game Caper in the Castro was brought to light. To date it is the first known game made by and for the gay and lesbian community. In 2017, our Adrienne Shaw was able to interview the designer, CM Ralph, who revealed that the game was made on Hypercard, a Mac business software program that she realized could be utilized to tell interactive visual stories. In addition, she had recently discovered the original diskettes for the game and its “straightened” version, Murder on Main Street.

Unfortunately, the program was designed on a proprietary version of the software, meaning that only a working 1989-era Mac could open the files. Thanks to Andrew Borman at the Strong Museum of Play in Rochester, New York, we were able to open and get archivable versions of the games. Then, thanks to Jason Scott at the Internet Archive, we were able to get a playable, emulated version of the game available to the public for the first time in nearly thirty years. We will be able to have a playable version of the game on a 1980s Mac computer with specially constructed emulation hardware at the exhibit, as well as be able to showcase images of the diskettes and contemporaneous news coverage of the game.

The research on Caper in the Castro, moreover, lead us to discover the 1992 game GayBlade, which was also assumed at the time to be a “first” in gay game representation. She was able to track down its designer Ryan Best for an interview in 2018 and we were able to collect quite a bit of contemporaneous press coverage about the game. At the exhibit we will be able to show scans Best made of the original game manual. The game files themselves, unfortunately, seem to have been lost to history. While a game released for free in 1989, downloaded hundreds of thousands of times, was resurrected due to the lucky find of the disks during a move, a game that sold thousands of copies in the early 1990s now only exists via textual and interview accounts. And both, until very recently, had also largely been forgotten. 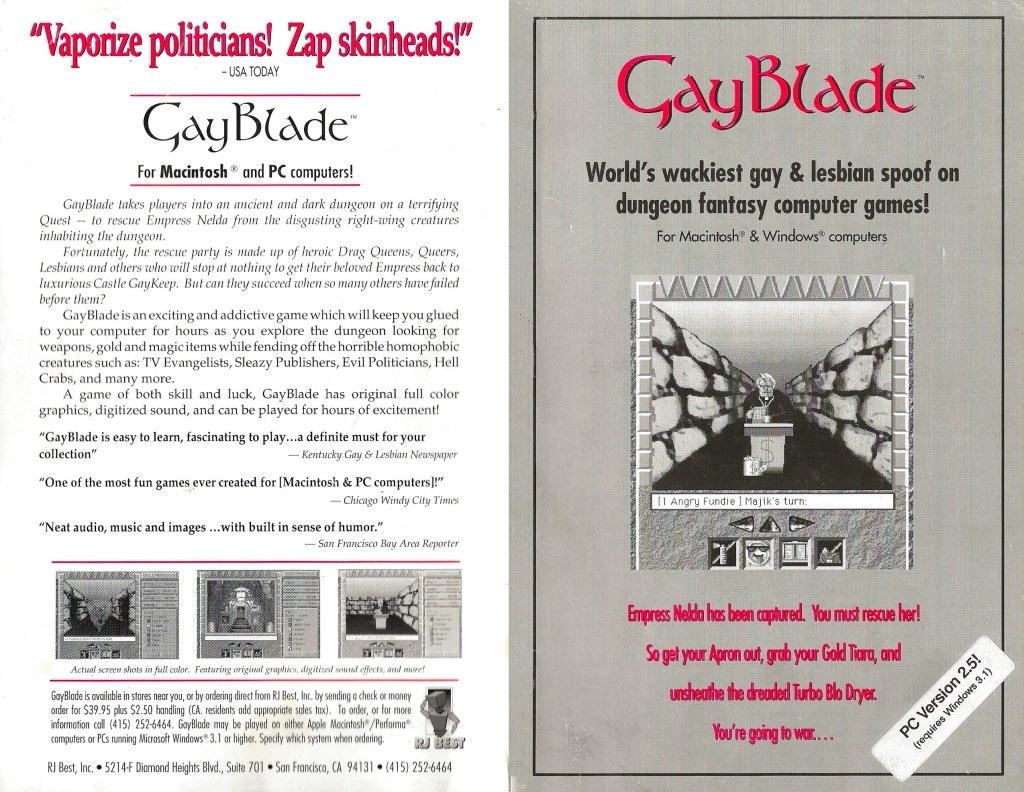 Above: GayBlade, another early LGBTQ game, seems to have been largely lost to time.

Many exhibits of digital (game) history have similar problems: funding and design; deciding what to showcase and how; copyright concerns and permissions; hardware and software compatibility; having on hand technical support for interactive or playable exhibits; maintaining flow through the space; accessibility; etc. Our exhibit is no different. Yet the task of displaying LGBTQ digital games history poses the unique challenges of representing a past that is both recent and already forgotten, but in the process of being rediscovered.

Adrienne Shaw is an Associate Professor in Temple University’s Department of Media Studies and Production and found of the LGBTQ Game Archive.

Jan Schnorrenberg is working for Schwules Museum in Berlin, Germany and is one of the curators of “Rainbow Arcade”, the first exhibition to explore the history of queer video games.

Sarah Rudolph studied Digital Journalism and Media in Cologne and is co-founder and Editor-in-Chief of the alternative teen magazine brause*mag.