I played Little Red Lie, and now I am no longer capable of feeling joy. It’s a story-driven game that unflinchingly shines a light on topics of mental illness and economic disparity. The main interaction is lying — to yourself and to everyone around you. It’s bleak and uncompromising, full of people who either make terrible choices or are bad folks making even worse choices. It’s out now for PC and Mac on Steam and on iOS and Android.

Little Red Lie isn’t developer Will O’Neill’s first exploration of heavy topics like dysfunctional families and existential terror. His first game, Actual Sunlight, is about depression, trading off between screens of text and scenes out of a traditional role-playing game in which you walk around and examine objects. Little Red Lie has similar gameplay, featuring long internal monologues from the characters interspersed with exploration and conversation.

We get a peek inside the minds of two characters: Sarah Stone, an unemployed middle-aged woman who lives with her parents and her shut-in sister; and Arthur Fox, a money-worshipping millionaire egomaniac. It’s not a long game — about four to six hours — but it feels like a lifetime’s journey to rock bottom for both characters as their stories unfold in parallel.

When you talk to other characters, the dialogue options show what Sarah and Arthur are really thinking, but you have no control over what they actually say. You can only watch the conversations unfold, each lie colored red, and then steer the characters toward their inevitable fates.

You could label the story as unremittingly grim, and O’Neill says that he tried to pace out the emotional beats. This was not only to avoid wearing players down from all the little tragedies but to also showcase different parts of the characters, particularly Sarah.

“Even though most of what [Sarah] likes about her life is in the past, and exists within a family that she has complicated feelings about, I really wanted to get across that she is, at the very least, somebody who could have been someone else entirely,” said O’Neill in an email to GamesBeat. The emotional resonance hits different pitches, such as uncomfortable recognition and revulsion. Sarah embodies some relatable insecurities and showcases the reality of how a loved one’s mental illness can affect everyone around them. Her relationship with her sister Melissa is fraught with years of resentment and guilt. Melissa had a troubled history and now lives in their parents’ basement, barely interacting with the rest of the family and causing them to sink further into financial debt.

“For me, the relationship between Sarah and Melissa is very much an interrogation within myself about depression, and a swinging pendulum between understanding that it is beyond my control while also feeling tremendous guilt about how it has impacted the people I care about,” said O’Neill. “To me, Melissa represents the greatest fear that I think I have for the future — that I won’t be able to do anything at all. That I’ll simply stand frozen, in the headlights, until the day where it all hits zero finally comes. Generationally, I don’t think I’m alone in that fear at all.”

Unlike Sarah, who is flawed but ultimately well-meaning, Arthur thinks and does increasingly repulsive things, but after sitting in his skull for the entirety of the game, I couldn’t help but actually feel some pity for him. Therein lies the magic of Little Red Lie. O’Neill manages to create empathy for every character, even the scammers and the criminally negligent.

O’Neill says that Arthur was at first inspired by Rob Ford, the former mayor of Toronto, though over time, the character began taking on some of President Donald Trump’s traits as well.

“I was interested in creating a character that could seem deceptively warm and humorous on the outside, but with true colours that could quickly show themselves if you were to ever get in their way,” said O’Neill. “As for finding ways to get an audience to understand a character like Arthur Fox, I’d say that passionate sincerity has an attractiveness all its own, however repugnant, and that you have to find things that probably many of us have thought before but later regretted. The difference between you and him, of course, is that he doesn’t regret it at all. But you do recognize it.”

Each of the scenes in Little Red Lie is like a set piece from a play — we see a title card and a byline and then what follows is a kind of extended monologue. O’Neill actually has a background in playwriting, which he says influences his other work. He began experimenting with game development after playing Christine Love’s Digital: A Love Story, a piece of interactive fiction that mimics an old computer operating system and revolves mainly around posting on message boards and cracking codes. 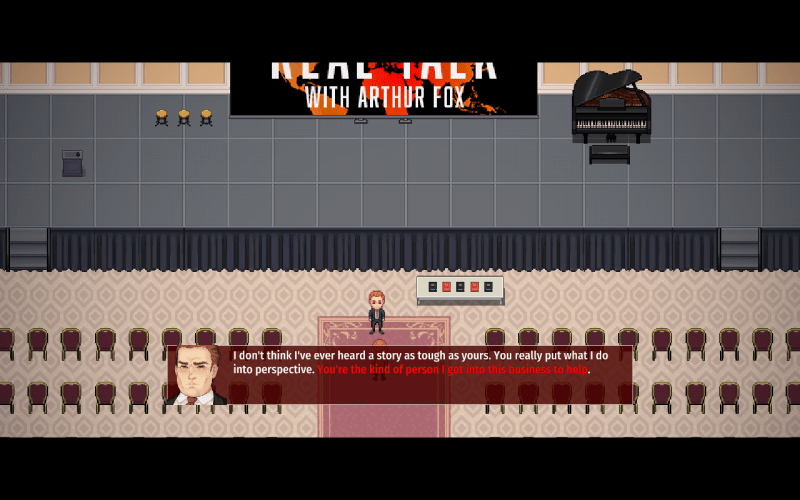 Little Red Lie requires a lot of reading, but it never comes across as a wall of text. Instead, it feels intimate, almost like excerpts from someone’s diary. The pacing of the text mimics the pauses and emphases of how someone might naturally speak aloud. We’re told a lot of things explicitly — which thoughts are lies, for instance — but O’Neill has left some things up for interpretation. When the person you’re talking to speaks, you’re never alerted to whether it’s the truth or not. And the passage of time is nebulous, spanning four seasons but possibly over a number of years.

“I’m showing you the important parts and hopefully implying enough to let you fill in the gaps, and what I’m using the seasons for is more thematic. It’s also the source of one of the very minor ecological themes of the game, where I’m flipping the standard JRPG weather conventions around a bit to suggest global warming — it starts off raining in winter and then snowing later on,” said O’Neill. “Of course, even that theme is intertwined with the sense of economic collapse that the game is more predominantly about. Sometimes you look at everything going on in the world and think: It’s a real race to the finish, ain’t it?”