The granddaddy of them all is getting ready to let everyone in, as Wizards of the Coast announced today that Magic: The Gathering — Arena will launch its open beta phase on September 27.

Digital card games are an important and growing market worth $1.3 billion in 2017, research firm Superdata reports, and should hit $1.7 billion in 2019. Blizzard’s Hearthstone rules, making 3.3 times more than its closet rival. But it’s going to get serious competitors when Wizards brings Arena from its open beta to launch state and when Valve releases Artifact, its take on digital card games, on November 28.

Chris Cao is Wizards of the Coast’s executive producer for digital game development. He said that “players played more than 110 million games of Magic” during the closed beta, but he didn’t share just how many people took part in the test period.

Wizards of the Coast says Arena will be offline between September 24 and September 27 as it prepares to shift from close to open beta. Those who have bought Gems, Arena’s premium currency, will received refunds. During the beta, Arena also gave out Wildcards from card packs and quests, but the cards players crafted will disappear. Instead, a Wizards spokesperson said that “everyone will receive a set amount of 8 Common, 4 Uncommon, 2 Rare, and 1 Mythic.” 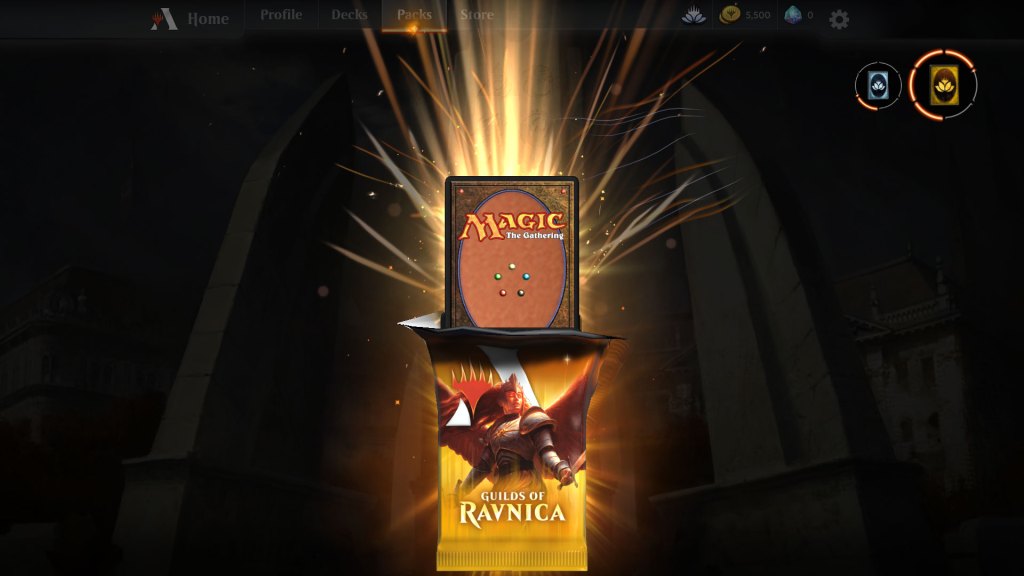 Above: That pack of Guilds of Ravnica cards sure is shiny.

The open beta is also coming with some goodies that link the physical and digital nature of Magic together. Guilds of Ravnica is Magic: The Gathering’s 79th expansion, and it debuts October 5 (it’s getting a Dungeons & Dragons guidebook, too!). Every Guilds of Ravnica Planeswalker deck will also contain a code to unlock that deck in Arena. Every Ravnica prerelease pack will also come with a code for a Sealed event (a new mode, which of course is a long-lived format in the tabletop game) in Arena. You can also open Magic card boosters to find three free booster packs in Arena.

Arena will also launch an event — a Singleton mode, and players will get one free entry to this. During the closed beta, Singleton proved to be a popular event with players. In this format, you construct decks without any duplicates — a fun challenge.

That Wizards is putting on Sealed and Singleton so soon in the open beta shows just how much players enjoyed events during the closed beta. On Reddit and in the forums, you’d get both positive and negative feedback after events, though I noticed a lot of love for Singleton. I asked Wizards which events were the most popular during the test.

“Quick Constructed was the most popular, but we did see robust play across all game modes and during special events,” Cao said.

Magic has a number of different formats, such as Commander (which is for 2-to-6 players). I asked Cao is this was a mode that players had been asking for on the forums and on Reddit. He leaned into a discussion of another closed beta event, providing some enlightening context, before honing in on the answer.

“As players ourselves, we have been wish-listing all sorts of variant modes,” Cao said. “Momir [a chaotic format in which you discard land cards to summon random creatures, as Commanderin’ podcast cohost Shivam Bhatt explained to me] was an after-hours effort born from that passion and like us, players do want more ways to play MTG,” Cao said. “We’re going to lean into 1-vs.-1 options first because we can activate those better early on. But MTG Arena is more than just Standard; it’s a platform for all sorts of MTG experiences.” 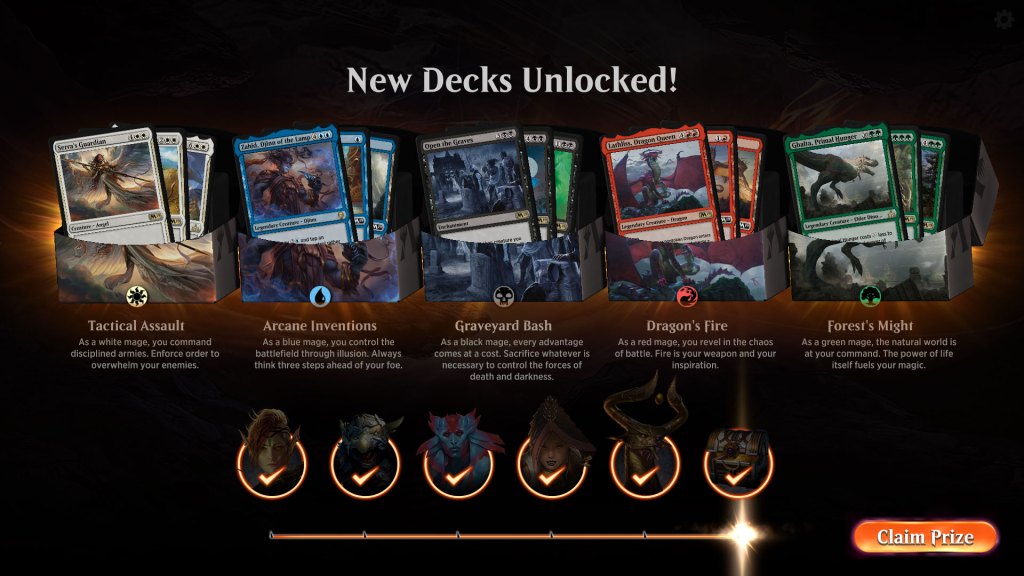 Above: You can earn starter decks in Magic: The Gathering — Arena.

One of my favorite parts of the closed beta was how I earned premade decks by accomplishing daily quests. As a Magic neophyte, it helped me learn the characteristics of the different colors and a dizzying amount of new mechanics. I asked if such deck quest rewards would carry on during the open beta and Arena’s full release.

“Deck quests are an important part of the MTG Arena onboarding experience. Early learnings from closed beta helped us fine-tune the deck content and distribution. Players really enjoyed earning decks as rewards, so we are going to be doing this again in open beta and looking into new ways to reward them,” Cao said.

We’ll find out what decks are in store for new Magic players like me — or veterans who’ve been around since the Wizards of the Coast launched the collectible card-game genre in 1993 and changed the tabletop industry — when the open beta launches September 27.