Playground Games’ arcadey series of Forza Horizon racers have become just as popular as the Forza Motorsport simulators that inspired them, so it’s no shock that Microsoft is using its Electronic Entertainment Expo (E3) briefing to announce the latest sequel in the series: Forza Horizon 4. The news has been expected since Microsoft Spain’s tease in April.

Forza Horizon 4 will be released for the Xbox One and PC on October 2 — and it will hit the Xbox Game Pass subscription service that same day. Developer Playground Games is promising a roster of McLarens and other cars as well as dynamic seasons that change drastically transform the terrain. “When time of day, weather and seasons change, everyone playing the game experiences it at the same time,” Microsoft says.

In addition to online play with friends over Xbox Live, Horizon 4 will ship with full Xbox One X support, including 4K resolution, HDR colors, and a 60 frames-per second mode. The game will include more than 450 cars from over 100 manufacturers, racing across landscapes including castles, valleys, and lakes. Early footage showed alternate vehicles such as hovercrafts and motorcycles racing through environments.

Following up on the Australian setting of Forza Horizon 3, the new game is set in Britain — a fitting addition for the series, which flitted from Italy to Colorado in its first two installments. As before, it’s an open-world experience, so you’ll be able to explore British landscapes by car rather than just using menus to select individual tracks, and gorgeous real-time visuals will connect your races seamlessly. 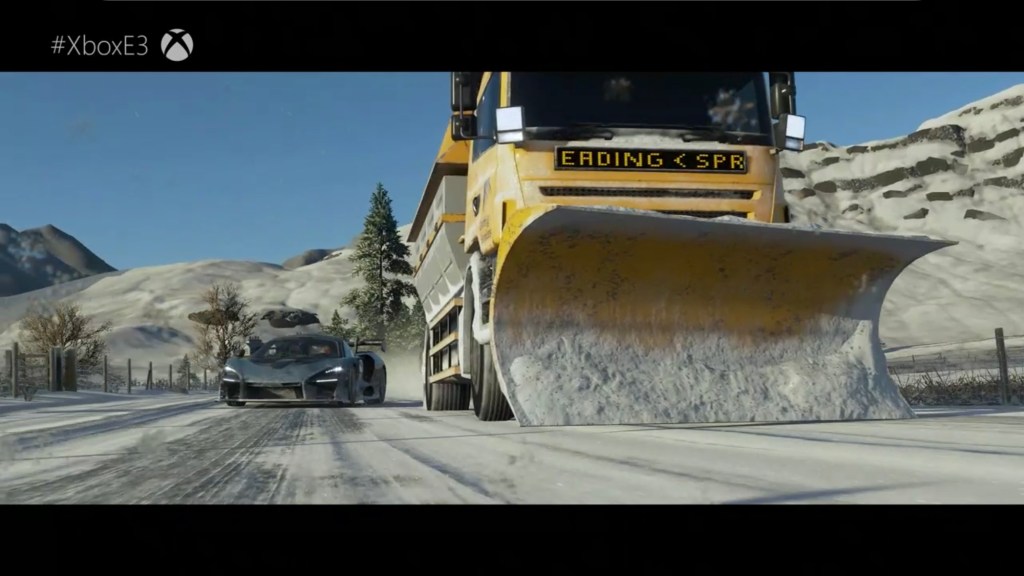 Beyond its great concept, which allowed a player to take control of a 350-car racing competition that continued to grow in footprint across the Australian outback, Forza Horizon 3 benefitted from two popular DLC packs: A Hot Wheels pack that brought 10 of the iconic toy muscle cars and orange plastic tracks into real life settings, and a Blizzard Mountain pack that added a treacherous snowy course to the otherwise temperate island.

An Ultimate Edition of the game promises access to two “expansions” and four-day early access ahead of Forza Horizon 4’s October 2 general availability. Given the success of prior Horizon DLC, it’s unclear whether the new game will require DLC for any of its more dramatic seasonal stage changes, or expand beyond Britain to other U.K. isles.