Chris Matthews, CEO at Archetype Studios, clearly gets where games like this need to be.

And by “like this”, he’s referring to the jetpack shooter, a genre that really launched with Tribes and, ahem, ascended with Tribes Ascend. The format is typical to most PC shooters, but the physics mechanics of skiing and sliding and jumping create a truly different kind of environment, and one that requires different skills to execute effectively.

“We grew up on this stuff,” says Matthews, and that passion led to a new experience. “When you play a game like Midair, it’s a very different experience… you’re not locked to the ground, and it’s much freer. It creates interesting moments you don’t see in other games.”

It’s a tradition that shows no sign of slowing. “It’s a passion that has lasted since the 90s,” he adds. Having worked as interns at Garage Games on Legions Overdrive, the evolution is natural when it’s understood that the community exists to support the gameplay.

And so Matthews began to ask questions: “Why don’t we make a community-based version of this game? Can we a brand new IP of our own thing?” And the evolving world of coverage and monetization allowed this to happen.“We started it as Project Z, building on what we thought the physics and the look should be.”

Kicking off, this group tested with 40 people in a community space “and it was very raw,” says Matthews. But the feedback was positive and engendered more support not only around the community, but around the world. Adding a composer in the U.K. and a graphics designer in Latvia and an art lead in Finland helped prove that point, as well as the global ongoing appeal of a game with jetpack physics.

“And we did the same thing a year later and we had more maps and 80 people. It was very different,” he adds. “And we got great feedback and more interest in the game… so then we had the chance to do a Greenlight campaign.” How it works today

It’s partly driven by nostalgia, but also the fine-tuning of physics that Matthews’ team is implementing to both modernize and retain a conviction to the origins.

“It’s a stratification of the community of people with games they played in the past, such as Legions Overdrive or Tribes Ascend… but there’s still a community who played Tribes 1 and 2…and the way the jetpacks are different, the pieces are different… in many cases you see this feedback conflicting,” says Matthews.

So in this clash of cultures, Matthews finds a lot of detail in research. “We take it to heart,” he says of the challenge to determine what gamers are looking for, and what the evidence suggests they want.

“We realized people were saying it doesn’t feel right,” he says. Then physics entered the equation as the team realized that controls of typical first-person shooters were getting in the way. 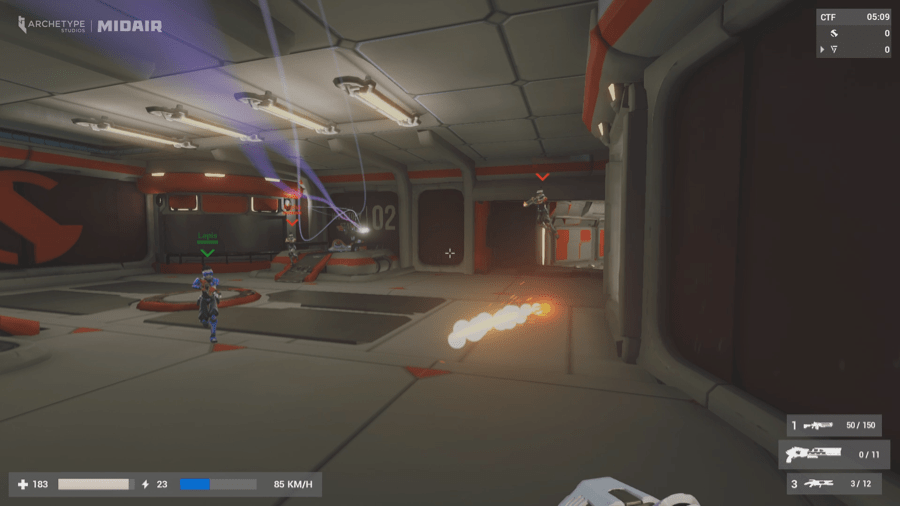 Matthews recognizes that his small team is playing in a large pond with a tiny pool. Beyond wishing his team had a Destiny 2-like budget there are many other challenges that he recognizes do not exist in a vacuum. “It’s not a casual shooter,” he says, though he accepts that there needs to be a balance to attract the broader audience alongside those who already “get” the jetpack shooter style.

“We’re trying to observe the successes and failures of other games to see if we can appeal to all jetpack shooter fans,” he adds. Part of that is the research and part of it the observations. “Like muscle memory, you have to go to the gym for three months or so for it to kick in.”

Like Matthew’s father, who was playing Tribes back when it first emerged and experienced those initial trials and tribulations, there’s a clear understanding of the changes in culture, time, and expectations. “We’re talking to people who have never seen this before, or see this as something they can’t achieve. That’s because we want them to try these things because it’s challenging,” he says.

It’s a fascinating challenge of what might be considered old-school style gameplay with what a new audience expects. That also fits with ideas around eSports, where Matthews thinks the game will fit, but won’t push it into a pigeonhole. “We need to prove that we can develop and deliver on a game that players want before we can showcase what we want to do in eSports,” he says.

And that’s where Mid-Air sits in a space that might look familiar, but is actually unique. These are notions not lost on the team. “Not only do we have the nostalgia…but it is also a passion.”

That should be the best combination when a 20-year old franchise is reinvented.