I’ve said before that gaming laptops are starting to make a lot of sense once again, but that’s only if the companies that manufacturer these products take advantage of breakthrough technologies from partners like AMD, Nvidia, and Intel.

That brings us to the $1,800 MSI GT62VR, which straddles some of the lines that separate old gaming laptops from the new crop, but the end result is still a machine that never struggles to play modern games and should easily last for the next four to five years.

MSI has packed in the latest chips from Intel and Nvidia into this laptop, and that makes it smart enough to handle all kinds of tools at once. Here’s a look at the specs of the system I used: 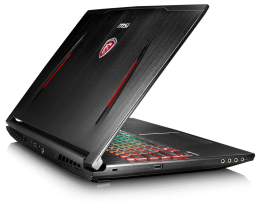 Above: It’s a blazing machine for gaming and work.

As an example of an extreme situation where the laptop excels, I run a weekly podcast that I livestream and record simultaneously. To do this, I need to have Chrome and Xsplit open simultaneously, and I have both programs slam the CPU and GPU with requests for video rendering, Google docs, and a million tabs. It’s often too much for the old 4th-generation i5 and the new GTX 1080 Ti that I have in my desktop right now.

As a work machine, this notebook is clearly capable of handling just about anything you’ll throw at it. And if you’re doing any video, photography, or audio processing, that seventh-gen Kaby Lake processor is nearly a must-have for anyone who does their work on the go or someone who wants desktop power in a form factor that can easily leave the desk.

It’s a VR and gaming powerhouse

At the same time, this is clearly a gaming laptop first. And where some of the GeForce GTX 1060-based notebooks were mostly hitting 60 frames per second at Ultra settings and a 1080p resolution, the 1070 is enough to get you over the hump for games like Watch Dogs 2.

Here’s a test I run to see whether or not the system can handle some of the more demanding games at 1080P60, and it easily surpassed that marker: 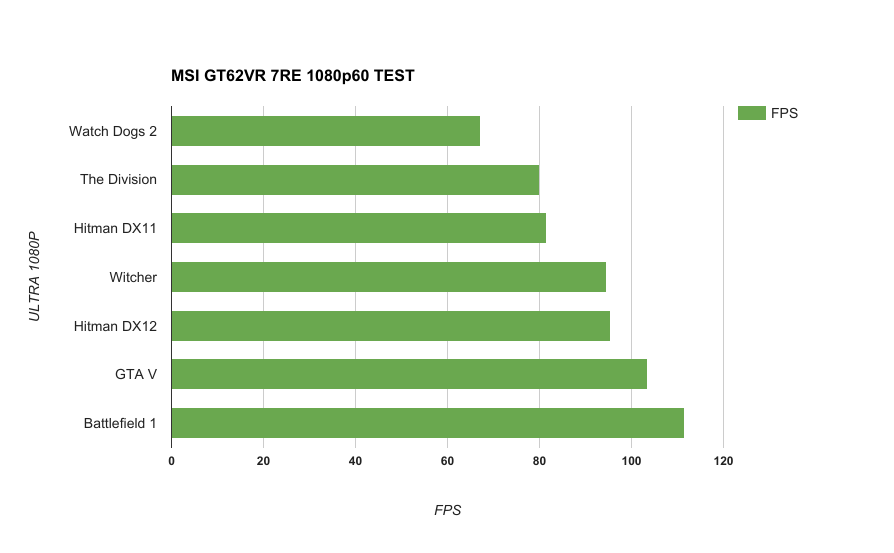 And here’s how the GT62VR compares to the MSI GS43VR, which illustrates how much more performance you get from the 1070 and the Kaby Lake processor: 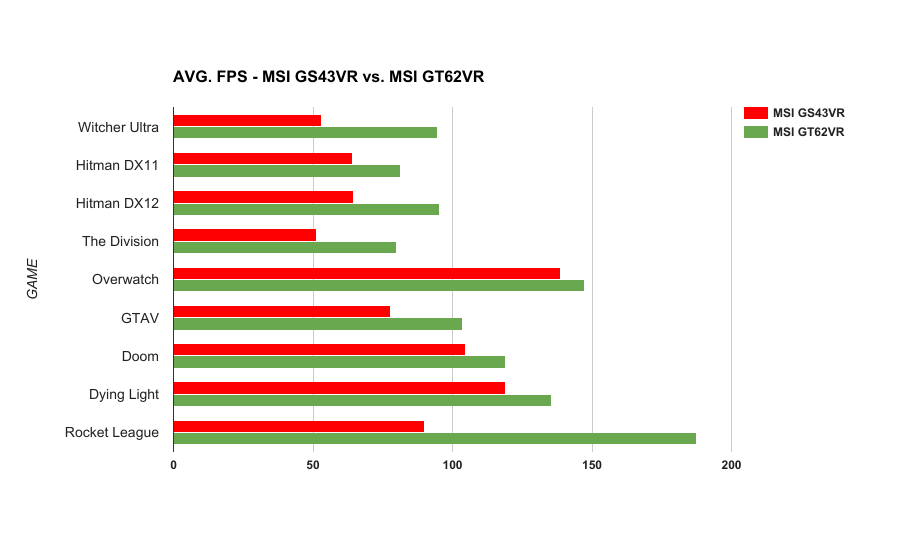 The GT62VR comes with a 1080p monitor, but you can plug it into a 1440p or 2160p monitor if you like. It can handle some games at those higher resolutions. At 4K with Ultra settings, you’ll still do fine in some of the multiplayer games like Rocket League and Overwatch, but this is where The Division and Watch Dogs 2 will start to fall off sharply. But I never like to hold that against a laptop because they’re mostly built as enclosed gaming systems dedicated to doing 1080p60 — especially when it comes to a 15-inch screen.

Instead of trying to position this generation of gaming laptops as 4K machines, companies like MSI are instead leaning much more heavily into virtual reality. And it’s there that this laptop excels. I had some trouble getting the machine working with VR due to a troublesome Windows 10 update, but once I got over that, I was getting smooth experiences in every game I tried. Again, thanks to that Kaby Lake i7, I was also able to get away with having apps like Chrome open in the background at the same time without having to worry about taking a performance hit.

At this point, even if you don’t care about the technology, it’s difficult to avoid getting a decent gaming laptop without also coming away with an excellent VR machine. And MSI’s device is one of the better laptops for powering your head-mounted displays.

Beyond the internals, the laptop has a crisp display and a responsive SteelSeries keyboard. These are crucial aspects for a gaming machine, and they deliver a strong enough experience to support the idea of making this your primary machine for games like World of Warcraft, The Witcher 3, or Playerunknown’s Battlegrounds.

The IPS monitor does lose a lot of clarity at sharp angles, but that never turned into a problem during typical use. Instead, using this on my lap, desk, or table, I was impressed with the bright images that relatively accurate color reproduction.

The GT62VR also has enough USB ports and video outputs to support peripherals like an HTC Vive or Oculus Rift. It has 3 USB 3.0 ports on the right, 1 USB 2.0 on the left, and even a USB-C option on the back. You can also output to a monitor using the HDMI option or the Mini-DisplayPort.

The sad state of Windows trackpads continues. Out of the box, the GT62VR’s trackpad was a miserable thing to use. What’s especially frustrating is that the hardware is not actually the culprit — instead, it’s something to do with the drivers because installing the default Microsoft software fixes everything. Two-finger scrolls, something that would almost never work before some tinkering, now works perfectly for me. But I shouldn’t have to dive into Device Manager to fix this junk.

Above: It looks slimmer in pictures than it really is.

I doesn’t follow in the footsteps of what MSI has done with its gaming laptops that use the GeForce GTX 1060 cards. The GS43VR, for example, is compact and sleek whereas this model is much bigger and bulkier. Sure, that’s to fit in the 1070 card, but it’s still disappointing that the GT62VR looks more like an older gaming laptop than something new and modern. Personally, if I were traveling a lot, I’d probably go with the smaller, less powerful option because I’m not sure the power justifies the size and weight.

While the GT62VR features the latest tech from MSI, Intel, and Nvidia, it still feels a bit stuck in the past in terms of design. But if you’re OK with lugging around a larger laptop, this device will deliver flawless 1080p60 gaming in a machine that can also easily handle VR. At $1,800, that’s not a lot of portable power for a rather reasonable price.

MSI lent the laptop to GamesBeat for the purposes of this review.