It’s time to pack your rod and reel along with your great swords, bows, holy symbols, and spellbooks.

Neverwinter’s next update for its Storm King’s Thunder campaign on PC is the Sea of Moving Ice, which introduces a new zone, travel options (like a kayak), artifact weapons, treasure hunt, a 10-player battle, and a fishing minigame when it launches November 8. The new material for this free-to-play massively multiplayer online role-playing game continues the roll out of Dungeons & Dragons‘ latest storyline, which has giants rampaging around the Sword Coast (where Neverwinter and its adventure zones sits).

D&D’s flagship game keep its 12 million registered players on PlayStation 4, Xbox One, and PC happy with these kind of content updates, which start on computer and later roll out to consoles.

To get around parts of the zone, where icebergs are floating around on the Sea of Moving Ice, you’ll in little kayak-like ships. It’s a change for how you travel in Neverwinter, as before, you either walked and ran or used a mount, like a horse, tiger, or monster such as the Gelatinous Cube.

“A big part of it to move around the zone is actually getting a kayak and travel around,” senior game designer Randy Mosiondz said.

This module focuses on attacking the Frost Giant Jarl Storvald, who’s trying to use the Ring of Winter (one of the most famous artifacts in the Forgotten Realms D&D setting) to bring a frozen fate to the Sword Coast. It concludes with a massive 10-player battle against the evil behemoth. But it also has some fun side-trips, like fishing.

The old mage and the sea 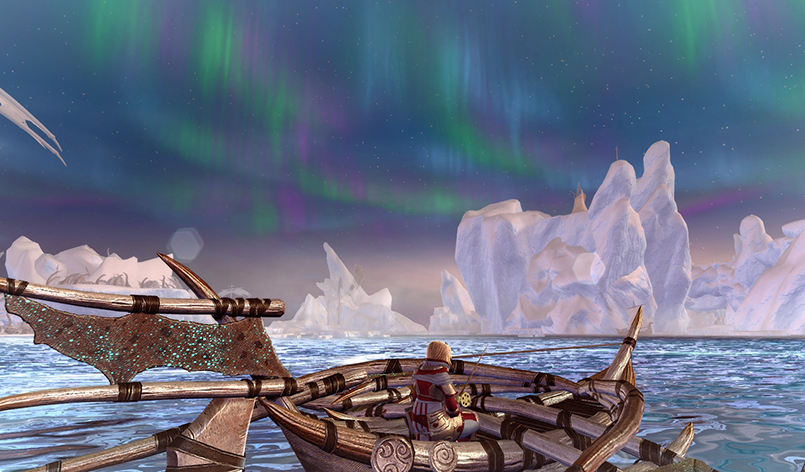 I checked out the minigame during a recent visit to Neverwinter developer Cryptic Studios. You can find a hundred types of fish, which have their own collection page in your inventory. “Each one is regional, so you’ll have to sail all over the map to catch every kind,” systems designer Tradd Thompson said while showing me how it worked. You trade the fish in for reputation, which you later use to open chests with gear.

But Thompson thinks it won’t just be about better gear, as he predicts players who are big into collecting will take to the fishing minigame. “They want to catch every kind of fish, and if you do, you get a special title that says you caught them all: Angler of the Northern Sea. If you catch all 100 of them, you get that.”

Wizards of the Coast has a great deal of lore on the Forgotten Realms, includes species of fish (such as the knucklehead trout that Regis, one of the famous Companions of the Hall, used to carve scrimshaw) — but not 100 different types.

“We’ve had a lot of freedom to be creative with these,” Thompson said. “Not every single one of these is a fish that exists in the actual lore. It’s something that we kinda got creative with.

“One thing about the D&D universe is that real creatures exist, like a dog. Right here, we have an octopus or a devilfish … all kinds of stuff like that which we renamed to fit the universe. But they’re largely a resemblance of things you’d catch in real life.”

And since it’s a fantasy world, Thompson and crew drew not just from their imaginations but also from Earth’s prehistory — and even a little puny, like the Icewind Eel. “A common Icewind Eel is oft-served at pubs and taverns up and down the coast of Icewind Dale, commonly served with battered and fried. Locals suggest pairing the dish with a cold pint of Icewind Ale,” Thompson said with a laugh.

While the kayaks, which The Elk Tribe created (some are slaves of the Frost Giants, but others are out fighting for their freedom — and helping you) drew a little off the existing mount system, Thompson said that Cryptic had to create new code, because it changes out your powers bar so you can go fishing while cruising on the Sea of Moving Ice.

To encourage exploration, Thompson said Cryptic used organic markers such as fish jumping and birds flying above an patch of water to show where you should cast your lines instead of quest trails and other symbols. My father was an avid fisher, and I can remember him teaching me to look for seagulls as a way to find a good spot to fish.

“Thomas Foss suggested this,” Thompson said, referring to Neverwinter’s first and current lead designer. “If you’re way out in the distance, it’s pretty horizontal. It’s hard to see effects on the water at a distance.”