Every few years, research firm Newzoo makes predictions about the future of esports. It has done that recently for the consumer side, but now it’s back to do that again for the business of esports. And it continues to expect big things for this space, like $1.7 billion in revenues 2021.

Newzoo’s biggest prediction for 2021 is that every major U.S. media conglomerate will have esports media rights in their portfolio. That’s not an outlandish statement, as it feels like we’re already heading in that direction, but this could represent the biggest increase in revenue for the esports industry.

“U.S. media conglomerates such as Disney, Comcast, and AT&T are already looking into content rights for esports,” reads Newzoo’s blog post. “As these companies look to entice younger consumers, they will become even more active in the scene. We expect these companies to not only feature esports on their linear media platforms, as seen with the Overwatch League on Disney XD, but also on non-linear live-streaming platforms, such as Disney’s upcoming streaming service.”

The other major outlook that Newzoo has for esports is how it will drive growth for gaming to surpass the revenue for traditional sports.

“Gaming as a whole, including esports, is already on track to become a bigger industry than traditional professional sports,” Newzoo explains. “We expect that the global games market will generate revenues of $180.1 billion by 2021, and esports will be a major driver of this, with many brands investing in esports to appeal to younger demographics. As more companies get involved and consumers spend more time watching esports content outside of the competitions themselves, esports will generate much growth within the global games industry.” 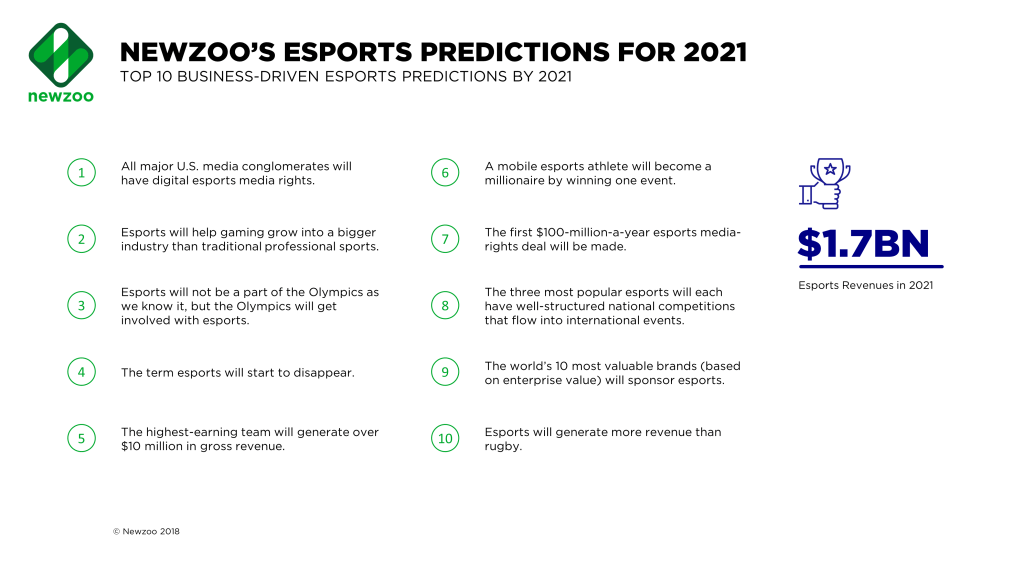 The research firm has other interesting thoughts about 2021. For example, the Olympics will embrace esports but not as part of its traditional winter or summer games. Newzoo analysts also believe that “esports” will fade by 2021 — the term, that is. Fans will likely talk about their individual game that they are a fan of, but don’t expect too many more generalized “esports tournaments.”

But making predictions is easy, looking back at how wrong you were is tougher. But Newzoo did that for its predictions about esports from 2015. It claimed that esports would reach $465 million by 2017 (it reached $655 million) and outgross the WWE wrestling promotion (it did). It also claimed that media rights would turn into a huge focal point (that’s true), and organizations would need strict rules and regulations to protect tournaments from cheating (the Esports Integrity Coalition began in 2016).

The only thing Newzoo didn’t nail is that esports would need to shift to a regional structure with city-based teams. Newzoo claims that’s partially true thanks to the Overwatch League, but it also notes that this strategy has gone widely ignored by other leagues. But who knows, maybe that could still happen by 2021.