You don’t need a high-end PC to play some of the most popular games in the world right now. Battle royale shooters like Apex Legends, Fortnite, and PlayerUnknown’s Battlegrounds run well on most older and affordable GPUs. But what if a more powerful video card could help you perform better in those games? Well, that’s exactly the claim that Nvidia, a company that sells GPUs, is making.

Nvidia released a blog post today that says people who use more powerful graphics cards have a better kill-death ratio in battle royales. This isn’t too surprising. Players have long understood that a higher framerate and lower latency can help you play better in fast-paced shooters. Nvidia is now trying to back up that hypothesis by looking at the numbers.

“The data showed that gamers that take full advantage of their graphics card by using a high refresh monitor — 144 Hz or above — have significantly higher K/D ratios,” reads the blog post. “And as we’ve seen before, that performance increases significantly as you work your way up to the GeForce RTX-20 Series GPUs.” 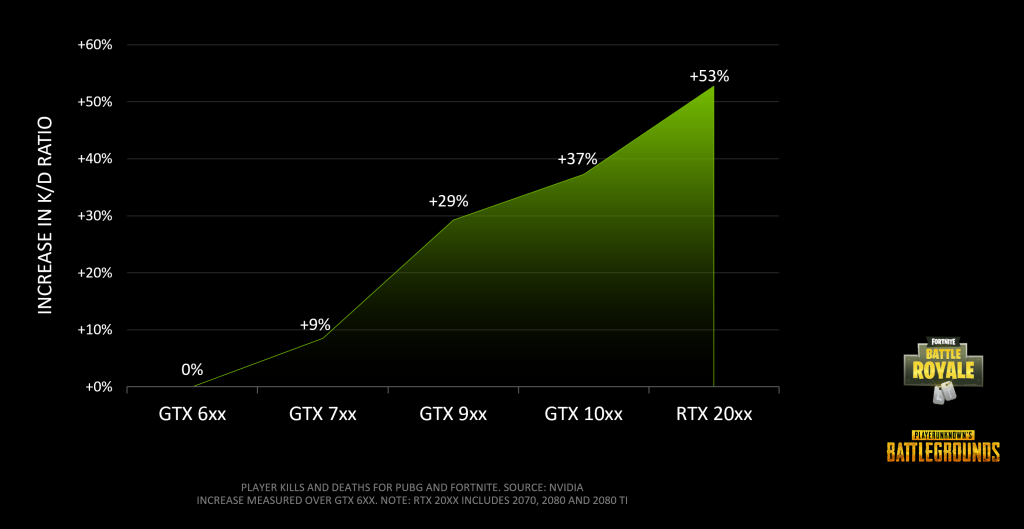 Nvidia used anonymous data to determine the kill-death ratio (KDR) for players across different GPUs. It says that each successive generation of video cards improve the average KDR. The RTX 20-series cards, for example, have an avg KDR that is 53-percent higher than the GeForce GTX 6-series.

This is nothing new. Better hardware has usually contributed to better performance on PC. Early “3D accelerators” would make water in Quake translucent. Other players, meanwhile, would see a solid blue block. Naturally, this would give Nvidia users a huge advantage.

A better GPU can get you higher, more consistent graphical performance. That can lead to a better KDR. A higher framerate gives you more time to react to information. But it’s not improving your reaction times. It’s just giving you information faster than someone with a less powerful card.

While Nvidia is only going to test its cards, AMD cards like the Radeon VII will give you a similar edge.

But Nvidia notes that a traditional 60 Hz refresh-rate monitor is a choke point in the chain of getting an image rendered and to the player. A 60 Hz display updates 60 times per second. That’s pretty smooth, but you can now get screens capable of refreshing much quicker than that. And that would get you even more information significantly faster than on a 60 Hz device.

“In other words, if you play battle royales and want to perform at your best, you should optimize your system for 144-plus frames per second and pair it with a 144 Hz monitor,” reads Nvidia’s blog. “And for ultimate performance, 240 Hz monitors provide an additional boost, though you’ll need a graphics card powerful enough to consistently run at 240 FPS to get the full benefit from it.”

Above: Nvidia even took play time into account, and better hardware still correlated with a higher KDR.

But Nvidia reiterated that this isn’t about physically improving your game performance.

“This data doesn’t mean that simply upgrading your GPU will make you a better player,” reads the blog. “But however you cut it, it is easy to see a relationship between the hardware used and a player’s kill/death ratio: having the right hardware enables the highest FPS and lowest latency, and that can help you reach your full potential on the battlefield.”

So if you play a lot of competitive shooters, one of the best upgrades you can make is to a 1440p monitor with a 144 Hz refresh rate. Pair that with an RTX 2060 or better, and you could end up with a much better experience and a lot more kills.