A one-man game development studio run out of a fairly rural part of New South Wales, Australia, a couple of hours train ride from Sydney, can’t be the easiest operation to make a success. But that’s just the situation lone wolf developer Alberto Santiago is living, fronting his company, Studio Canvas.

Oh, right, he also taught himself game programming with the aid of YouTube videos! A background of 10 years spent as a 3D artist working on movies, TV commercials, and art for advertising billboards set the stage, until changing situations with studios in Australia caused him to consider new options.

Before his current game, GoatPunks, was close to coming to PC, Santiago crafted a small iOS app that controls DSLR cameras. “It took me two months to make, and it did fairly well…in fact it’s still making money today,” he says. That ongoing income afforded Santiago the flexibility to focus his time on learning game programming and start developing his own game. 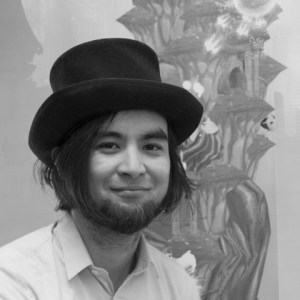 “I wanted to combine programming with my background in 3D art,” he says, and that led to YouTube, “where little kids were explaining programming, and they get so into it…It was cool to learn that way.” It was also the start of a journey Santiago was not anticipating given that this planned three-month project “has ended up being three years!”

Assisting along the way, Santiago credits turning to Unity “which has been a huge help because documentation has been laid out very well” for allowing him to learn through trial and error when YouTube videos failed to address the specific needs he had for GoatPunks.

Despite living a two-hour train ride from Sydney, he also credits the Beer and Pixels Meet-up of local developers with the opportunity to share ideas, find help with testing, and other useful camaraderie. This was important as he witnessed studios in both his 3D art profession and game development come and go “so at times it felt like I was the only one making games here!”

To be fair, the question had to be asked: Just where did the concept for a game like GoatPunks emerge? The core gameplay is a four-player king of the hill battle between rocket-wielding goats. While you can play single-player against Santiago-designed AI, the game shines in four-person splitscreen action where it professes many of the same fun, competitive elements as some of the designer’s own favorites like Smash Bros.

“Well, it didn’t start out like that,” Santiago confesses. With an eye towards producing an iOS game that would take advantage of the gyro to rotate around a treehouse while swiping off monsters, the evolution was partly fueled by simple observations on his travels into Sydney. “It would be like a tower defense game,” says Santiago of the original vision, “and on this two-hour journey to the city, your mind wanders. I saw the treehouse, and there would be creatures…”

But while trying to figure out the programming method to make characters climb to the top of a structure, Santiago hilariously reveals that “there was a guy walking his pet pygmy goat…it was really like this dog with horns. I started looking it up on YouTube and there are so many videos of pygmy goats dancing and climbing on steep hills and cliffs. Above: The actual Three Sisters (photo courtesy of Alberto Santiago, used with permission)

“They’re so good at it, so I replaced the monsters in the game with goats, because climbing is what they do. And they’re a fun animal. Eventually the treehouse tower became a mountain.”

Better yet, as a story suggesting that inspiration can come from anywhere, and observation is key, Santiago was living at the time in a popular tourist destination called Katoomba “which is basically the top of a mountain…we have a natural formation there called the Three Sisters, these three pillars and it kind of resembles the mountains in the game.”

Of course, as a solo developer working on a unique game design from a base on the top of a mountain, there could be the chance of isolation. Santiago was preparing to show the game at PAX when he got the sense that the game just wasn’t delivering the fun factor in the way that it would need to. Taking just a month, Santiago rejigged the experience “where you could have splitscreen and have more of a Smash Bros. or Bomberman kind of game. After I did that, the buzz around the game shot up.”

The king of the hill format of gameplay also came out of this reassessment, focusing the action on battling to the top of the mountain where a player must remain for thirty seconds, all the while being assaulted from all sides. A significant part of achieving compelling—and entertaining, chaotic—gameplay was balancing the maps and weapons for a four-player game. 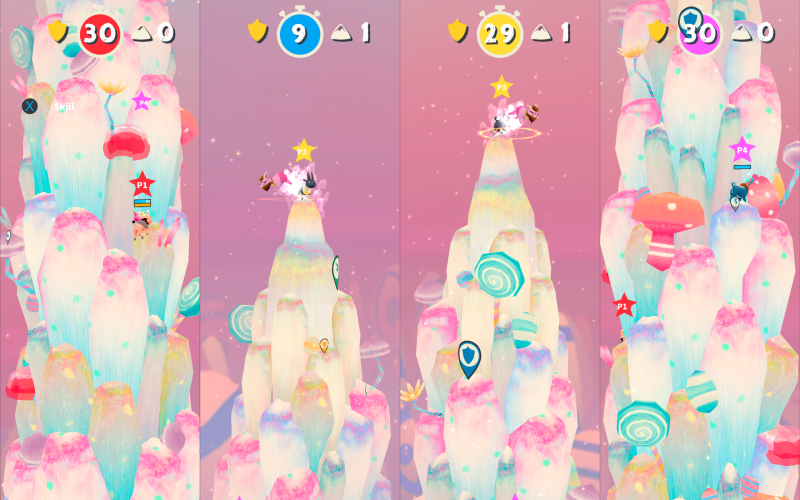 Above: Each of the maps vary in visual style.

This meant constructing effective AI routines that would mimic gamers’ actual styles and actions. “I had to develop AI properly so I could get the game to play itself. I needed it for my own testing. I managed to get a couple of machines from Intel and set them up to play against each other.”

As Santiago discovered, learning to program AI routines from scratch was no easy feat. “I was trying to learn from YouTube but it wasn’t really helping since it needs to make sense for your specific game. That’s why I made the recording system, so it records how you play, and then tries to work out patterns and strategies.”

In essence, this system captures a significant data dump and compresses it to discover how players are moving and acting, and then uses that information to tweak the AI routines to ensure that the non-human players in the game behave like actual gamers. Above: Probably best experienced sat next to three friends on a couch.

Even for a clearly smart artist and coder like Santiago, diving solo into the world of development meant discovering a whole range of details he didn’t know he didn’t know. The first was believing that in Early Access release, the audience would expect it to be incomplete, have bugs, be still deep in development.

“I learned that getting on Early Access, the game really should be more like 99 percent complete,” he revealed. “Most players are just assuming they are getting a game early.”

That situation led to the community reacting to the state of the build that, frankly, was shocking to Santiago. “If you get any feedback, everything is intensified. With a big team, that feedback is distributed among the team, but that’s not the case with a solo effort,” he says.

To address the intensity, Santiago takes a more creative route: “I have my girlfriend read the feedback online,” he admits, laughing. Such is the way a solo developer must deal with his three-year project being critiqued by the community.

This three-year project, that Santiago hopes to fully complete—and release on consoles—by the end of 2017, has not put him off the game development scene. Though he will go into the next project armed not only with the technical knowledge of having built an online multiplayer game with AI routines, but also a data reporting system and the core gameplay and graphics systems, Santiago has one key change planned to his current working situation: “I will make another game after this, but it will definitely be a lot smaller!”

There is, however, no guarantee that this next project will feature pygmy goats. (Which once you watch those YouTube videos, you might consider a real shame!)