The designers of Orwell: Ignorance is Strength are pulling their story about surveillance and fake news straight from the headlines from U.S. President Donald Trump’s attacks on the media. These have put the spotlight on fake news, and Osmotic Studios is turning this reality show into a computer game.

The original Orwell: Keeping an Eye on You debuted in five episodes in fall 2016. It sold more than 130,000 copies. That’s not much by the standards of Activision or EA, but it was plenty for the team of three independent developers (and their contractors) at Osmotic Studios to continue making Season Two of the award-winning surveillance thriller.

I spoke with Orwell art director Melanie Taylor at the Game Developers Conference in March. And I met her again at the Gamescom event in Cologne, Germany, where she showed off Season Two of the game, which Surprise Attack Games will publish soon on the PC, Mac, and Linux. I got a hands-on preview of what you do in the game, which puts the player in control of a powerful computer that can be used for surveillance of suspects. 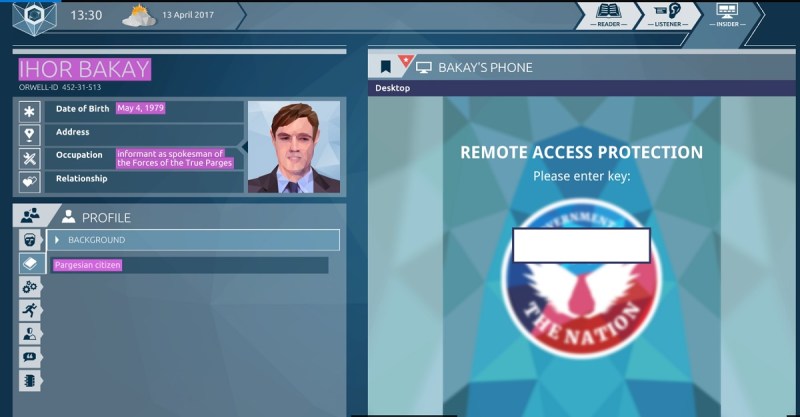 Above: Orwell is back with a dystopian story.

The first story focused on the conflict between a surveillance state and an activist group that was suspected of a terrorist bombing. The follow-up game focuses on power and democracy in a “post-truth” world. It has different characters, but you can import your decisions from the first game. It takes place about the same time as the previous story.

Inspired by the rise of fake news, the social media echo chamber, and the death of “truth,” Orwell: Ignorance is Strength places the player in the shoes of a government official in a top-secret department of the Orwell program. The conflict threatens to spill across borders and result in violent civil unrest. The player has to decide how far they will go in the service of their country — and how to regard the truth.

“It’s darker than Season One and has a more aggressive tone to it,” Taylor said. “It’s more like an open conflict instead of uncovering a government agency.” 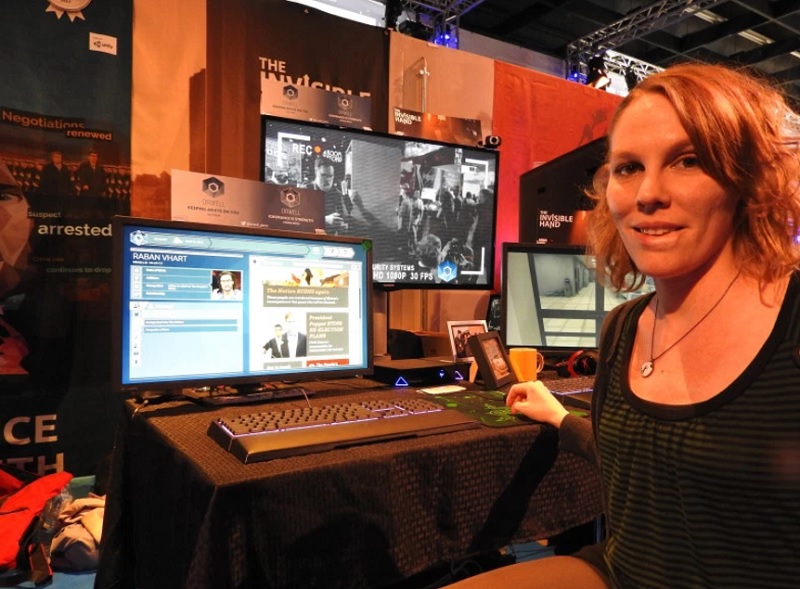 Above: Melanie Taylor of Osmotic Studios.

As for Trump, Taylor said, “This whole discussion of fake news. On the Internet, you can lie. It’s very difficult to see what is right or wrong.” She said it is hard to know if the Orwell got more attention because of Trump, but the team has definitely paid more attention to the news.

“We still want to stay in a fictional universe,” Taylor said. “It’s never about people who exist in the real world. But we do want people to say this is something they think about every day when they read the news.”

On the one side is a populist blogger accusing the government of corruption, and the other side is the government agency. Neither side cares all that much about the truth. There is a Twitter-like web site called Blather.

Above: Orwell: Ignorance is Strength takes you deeper into a government agency.

Orwell: Keeping an Eye on You, was released as a weekly episodic series in October and November 2016 and is a surveillance thriller set in a fictional country called The Nation. Inspired by George Orwell’s novel, 1984, it asked gamers to answer the question, “What would you do if you were Big Brother?” The phrase, “Ignorance is Strength” is one of the slogans of the Party in 1984.

The first Orwell: Keeping an Eye on You took its dystopian inspiration from the headlines about Edward Snowden’s leaks and big data analysis technology from Silicon Valley’s Palantir Technologies, which billionaire Peter Thiel founded. In this game, you investigate people and have to decide whether they are suspicious or not. In one screen, the computer program asks you to decide who looks suspicious, based only on what they look like.

“We are planning on doing this episodic release again, like a TV show,” Taylor said. “It lets players discuss the episode in between.”