Pillars of Eternity is getting a sequel — and just like the first time, fans can help bankroll its production. Or in this case, earn a piece of it.

Obsidian Entertainment will crowdfund Pillars of Eternity II: Deadfire on Fig, a rival to Kickstarter and Indiegogo where those who make pledges can also snag equity in the project. It will release on PC, Mac, and Linux, and the role-playing game studio is setting a campaign goal of $1.1 million … and if it hits $2.25 million, it’ll issue equity to backers. The first Pillars of Eternity was one of the first big video game projects on Kickstarter, raising $3,986,929 in 2012 (it’s still the No. 2 RPG project and No. 4 game in its history).

Fig seems like a natural choice for any Obsidian project, since chief executive officer Feargus Urquhart is one of the platform’s partners (along with Double Fine’s Tim Shafer and Inxile’s Brian Fargo). But Urquhart notes that the RPG studio has other reasons for choosing this Kickstarter alternative for the Pillars of Eternity sequel.

“There are a lot of reasons we are going with Fig, but they really come down to us wanting to build up our ability to get games financed differently and to let our fans share in the success of the games if they want to invest,” he said over email. “Many developers, including Obsidian, have had few options in the ways to get their games funded. Our hope is that with Fig, we can grow a group of investors who trust us and will help us realize even bigger games in the future.”

Pillars of Eternity II returns to the world of Eora, heading to the Deadfire Archipelago (a new region we don’t know anything about yet). It’ll have a similar sort of smart-looking art and tactical combat. From some of the images, you could get a Lovecraft vibe — those tentacles belong to some monster in the main image, I’d bet, and that fish being in the statue below sure looks like something that would fit into a Cthulhu story.

The biggest change from the original is that Deadfire will have a five-character adventuring party. The original had six players, and Obsidian’s 2016 RPG Tyranny had four. How did the designers decide that five is the magic number?

“We’ve been playing with a five-character party for most of development and really like how encounters work with that size,” Urquhart said. I can see how this came about — six characters can be cumbersome, while four can seem … limiting. Five enables for you to cover every major RPG role — tank, damage-dealer, ranged, magic, and healing — while still giving the player room to experiment with character builds.

The studio said you’re be playing out the story of the characters fighting “for their souls as they hunt down a god.” Pillars also had a different approach to armor than other RPGs, one that sounds more Star Trek than D&D. 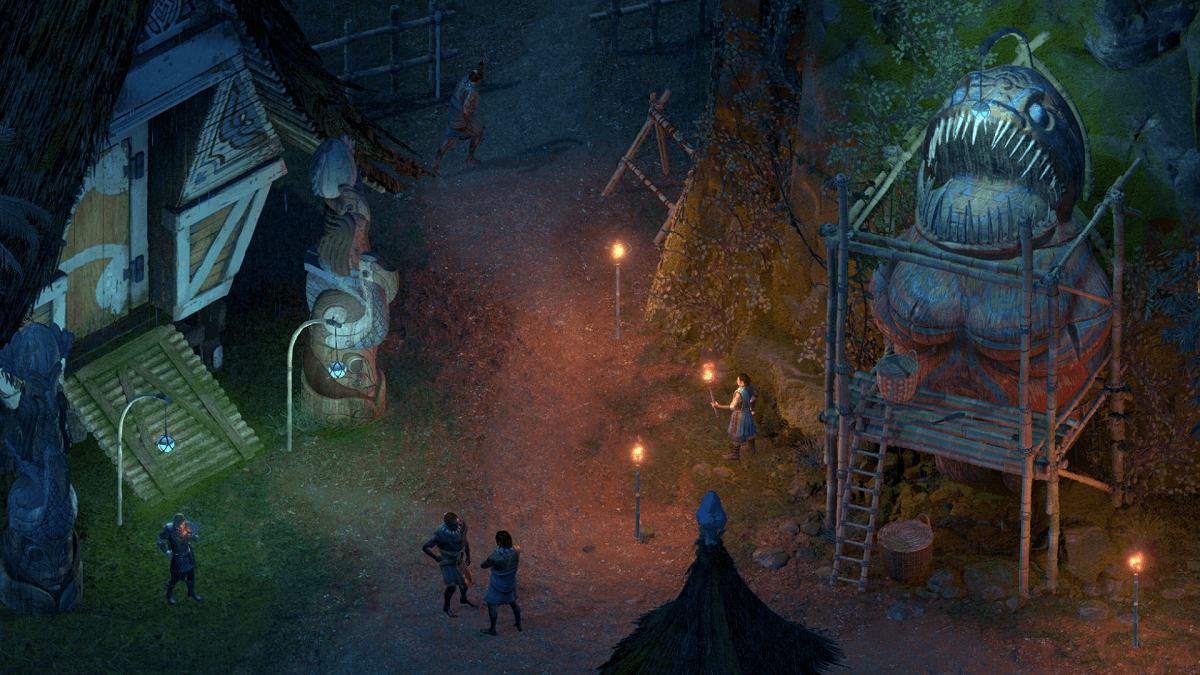 Above: That statue looks like it was sculpted right out of Lovecraft.

“We are so thankful to our fans, who believed in us and made the original Pillars a huge crowdfunding success. For the sequel, we have turned to Fig for our fan-funding needs because we not only wanted our fans to help shape Pillars of Eternity II: Deadfire, but to financially share in its potential as well,” said Urquhart in a canned statement. “Pillars of Eternity set the standard for quality among fan-funded games by not only delivering an amazing game, but also making good on everything we promised to our backers. Our goal for Pillars of Eternity II: Deadfire is to improve on what fans loved about the original while adding features our fans want to see, truly living cities, more freedom to explore the open world, and pushing what we do best at Obsidian — letting players define and play the role they want to play.”

Disclaimer: I backed the original Pillars of Eternity on Kickstarter in 2012 before I joined GamesBeat.