PlayerUnknown’s Battlegrounds has firmly established itself as the new king of the Steam PC gaming community by regularly having more players than Dota 2 and hitting 1 million concurrent players. At the time of this report, Bluehole’s Battle Royale shooter is at 1.02 million people all simultaneously connected for some last-person-standing action, according to Steam data. Dota 2, which is a free-to-play multiplayer online battle area run by Steam owner and operator Valve, is the only other game to ever hit 1 million concurrent players.

Not bad for a game that’s still in Early Access, an incomplete state in which a studio sells a product and collects feedback from players — and money from sales — to help fuel development. 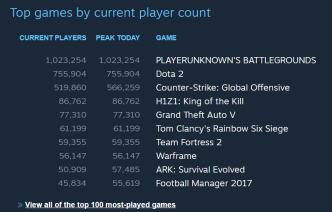 Above: That’s a big number.

If you’re wondering how the hell 1 million people are playing the game during morning business hours in the United States, you forgot about China — and you can never forget about China. For weeks now, PUBG’s peak hours have come at around 7 a.m. Pacific time. It’s evening in major Chinese cities like Shanghai and Beijing, and Battlegrounds has more players in this territory than any other country including the United States.

Concurrent players is not the best metric for comparing games to one another because people consume different releases in a variety of ways. But this 1 million simultaneous-players barrier is still significant. This reveals the importance of China as a territory for developers working on PC, and it also indicates that people don’t care if a game isn’t finished.

On September 9th 2016, we held our first alpha test for 20 hours. During the test period, peak CCU was lower than 200. https://t.co/uePRKhbZOc

But perhaps most crucially, PUBG is proving every day that Steam is the platform that is having the easiest time with The Minecraft Test. Back in 2013, former Wired games journalist Chris Kohler (who is now with Kotaku) explained that The Minecraft Test is a way of measuring the viability of a gaming platform like a console, a mobile OS, or a PC distribution service.

Put simply, The Minecraft Test asks if a platform is capable of producing the “next Minecraft.” Could a game come out of nowhere and blow up into a sustainable phenomenon on Nintendo Switch, PlayStation 4, or Xbox One? Maybe. But it is happening right now on PC because of the open nature of Steam and its features like the Early Access program for unfinished games (PUBG still isn’t “complete”), its Marketplace for enabling players to trade and sell digital items, and its refund system that enables the whole system to operate fairly.

It’s almost like Valve spent the years after witnessing Minecraft, which popularized the Early Access business method before it was official, and tried to figure out how it could enable something like that to happen again on its platform. It worked, and Valve, Bluehole, and fans of PUBG are all benefiting from that work.