Prey is the next big game coming for the consoles and PC, and it hits May 5. It’s a first-person action-adventure game where you shoot a lot of space aliens.

That part of the story from Bethesda and its Arkane Studios division isn’t so novel, but the enemies are. The so-called Typhon creatures are amorphous black blobs that jump out from the landscape to surprise you. You play as Morgan Yu, a half-Chinese, half-German man trapped on a space station.

The enemies, also known as Mimics, can take the shape of anything around you, and you have to figure out ways to stop them and destroy them. One of the ways is to shoot a “gloo” gun at them, trapping them in a gooey substance and then shooting or whacking them.

That’s a goofy weapon in an otherwise serious game where nothing is what it seems. I played a couple of levels of Prey at a preview event in San Francisco, and then I interviewed Ricardo Bare, lead game designer at Arkane Studios, which previously made the Dishonored video game. 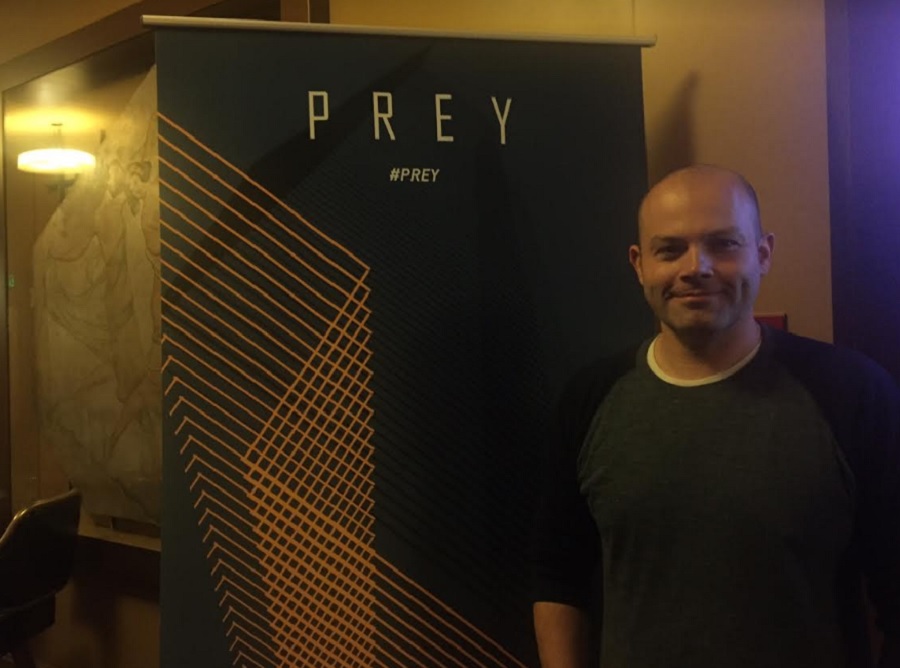 GamesBeat: How long have you been working on Prey?

GamesBeat: How much did you think about what the Prey franchise had done before?

Bare: Not very much at all. [Laughs] Before we even had the discussion about the name, we just made up unrelated names. “Project Gumball” or whatever. Our games don’t have names for a long time. We were working on this concept of an open-ended space station game with lots of sci-fi elements long before it had the Prey theme attached to it. It doesn’t really have any connection to the former games.

GamesBeat: So you didn’t change the game much once you decided to call it Prey?

Bare: Not really. Only in the sense that if the game was going to work, it needed to at least have some high-level themes around SF and the player isolated in a hostile environment.

GamesBeat: The enemies are unique. What was the thinking around how they behave?

Bare: They were super fun to work on, and challenging, because we deliberately wanted to avoid some typical tropes – orcs with laser guns, as our creative director likes to say, or your typical super gross bug aliens. Part of the fiction of Prey, one of the core themes, is not really believing what you see. If you play the beginning of the game, there are lots of recurrences of that theme in the world and with the enemies.

We wanted the enemies to be somewhat mysterious. That’s why they’re this black inky substance with these amorphous shapes. One of them can imitate objects in the environment. Key to gameplay is that none of that stuff is scripted. The mimics imitate things on their own. Level designers don’t tell them to do those things. It’s just part of their behavior.

GamesBeat: There’s some history in gaming for that sort of black smudge creature.

Bare: Oh, sure. You can go all the way back to comic books and characters like Venom, where you have these scary silhouettes that are hard to pin down.

GamesBeat: That changes what kind of shooter it is. You don’t really know what you’re going after or where they are.

Bare: There’s a lot of suspense. I don’t know where the threat is coming from.

GamesBeat: What kind of story did you want to tell? Did that develop alongside the gameplay and the world design?

Bare: At least the way that we work, there’s a lot of back and forth between gameplay and storytelling and level design. Sometimes we start with some fundamental premises. “Hey, we definitely want this to be science fiction and near Earth. Here’s the backstory that informs the architecture.” We start with things like that. But gameplay might come up with a cool idea on their own, and we find a way to retrofit that into the story because it’s such a cool idea. And vice versa as well. Sometimes somebody comes up with a one-off story idea and it’s so cool that we turn it into a game system we can repeat throughout the game.

GamesBeat: An Asian-American as a main character is different. How did that materialize?

Bare: With any game you go through lots of iterations around who might be the main character, their role in the game world, things like that. Morgan’s father is a Chinese neuroscientist and his mother is a German entrepreneur. At one point we had those flipped. Part of it is just—it’s hard to come up with a super logical explanation where we all concurred that this would be the best thing to do. “We just thought it was cool” is really the honest answer. 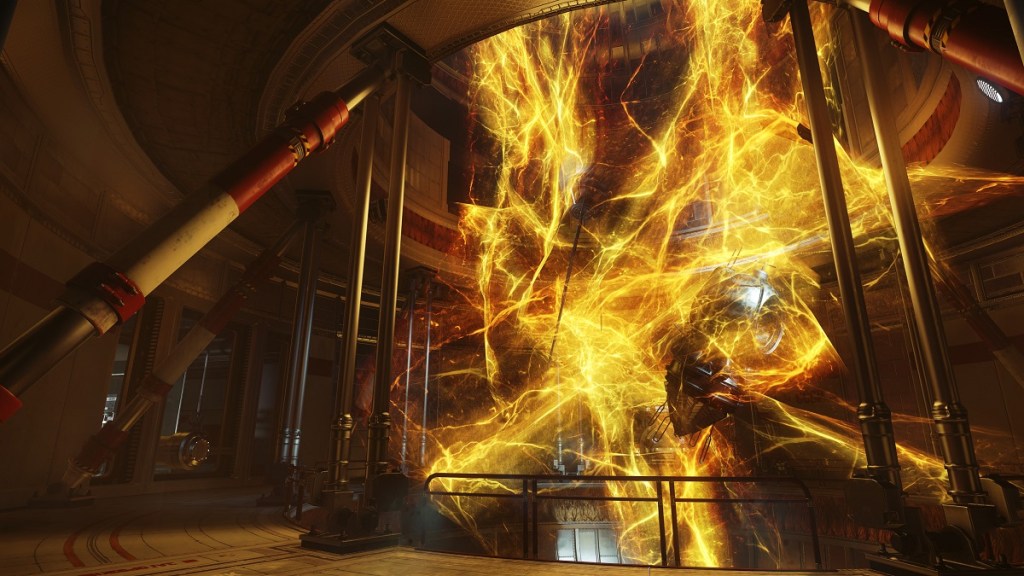 Above: Fighting Mimics with fire in Prey.

GamesBeat: When you’re at these different levels of the game, like the very beginning and then this middle section you’re showing, what are you trying to get the player to learn or do?

Bare: One of the things we love about the games we make—there are more games like these now, but they’re still very special, where they ask a lot of the player. It’s not paint by numbers, following a very scripted path. We invite the player to improvise a lot with the game mechanics. That’s our main goal, to give the player a bunch of cool weapons and powers and say, “This is your playground now. Here’s a challenge. How you approach it is up to you.” I love watching people play because it’s fun to see how they tackle things differently.

GamesBeat: The gloo gun is a lot of fun. Does that have a particular reason for being?

Bare: It started as just an experiment in mechanics. Hey, what if there was a multipurpose device – because we like things that have multiple purposes, not just a weapon that’s purely for shooting things in the face – that could shoot these balls of foam? You can freeze enemies or build platforms. Along the way the rules of how it worked changed, of course.

That’s a good example of figuring out what place something might have in the fiction of the space station. Why is it even here? We eventually worked it into the science part of the station, where scientists and security teams use this device to restrain volunteers or aliens that break out. But the player can figure out other things to do with it.

GamesBeat: You can freeze enemies and chop them up, things like that.

Bare: I don’t know if you saw, but you can spray it along a wall and build your own staircase to get somewhere that you can’t reach otherwise.

GamesBeat: You don’t exactly call this an open world. What would you call it?

Bare: It’s funny. If you say “open world,” you think of Grand Theft Auto or Skyrim. The scope of our world isn’t that huge. We call it an “open space station.” We’ve modeled the entire space station. You can go anywhere in it you want, as long as you have the means to get there and survive, including the entire exterior. You can go outside the station and navigate the whole thing, explore all the nooks and crannies, and re-enter the station from other points.

GamesBeat: Is the narrative directed, though?

Bare: There’s one main story, but you can go off on your own to do side quests or explore or build up your character. It’s pretty free-form. You’ll meet other survivors on the station and decide how you want to interact. You can ignore them or engage with them. Some of them will ask things of you. How you treat them matters.

GamesBeat: Now that you’re almost done, what do you think of the project, looking back?

Bare: This point is always super charged for me, emotionally charged. We’ve been working on this thing for three years. We’re super proud of it, but at the same time we’re anxious to see how people are going to react. It’s been good so far, seeing how much fun people are having with it. 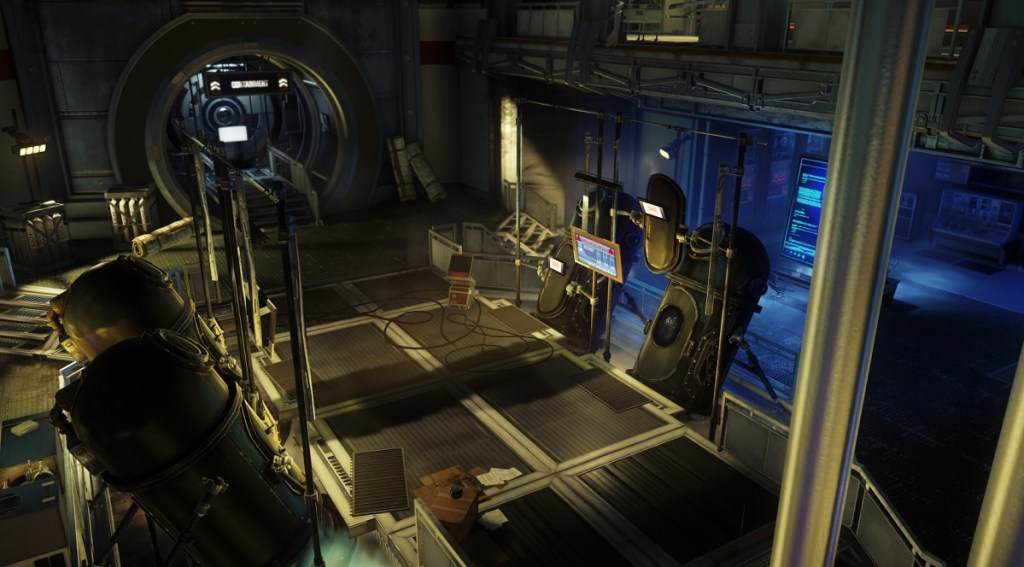