Who doesn’t want to get paid to play games?

Game hardware maker Razer is launching its “Paid to Play” initiative with zVault, a virtual currency platform that will reward gamers who use it to make payments for purchases and in-game transactions.

Irvine, California-based Razer sells both hardware and software targeted at PC gaming fanatics. To build loyalty, the company has created a secure digital wallet in zVault for its 22 million existing Razer ID customers. The company is also creating its own currency, zGold, which can be used to acquire games or items in games. And it has created zSilver, a rewards system that allows players to cash in their earnings for goods.

Razer unveiled the currency system a couple of weeks ago as a convenience for gamers, as there are so many different ways to pay for games, and gamers currently have their money spread out across many fragmented systems. Many virtual currency platforms have limitations on which games you can buy with them, and many of them don’t have a rewards program either. Now Razer is adding a way for gamers to earn rewards by playing.

Players can use zSilver to redeem Razer products, discount vouchers, and exclusive swag. Razer plans to expand zSilver rewards in the future to include commodities such as cups of coffee, movie tickets, and more. This virtual currency program is the first solution of its kind for rewarding gamers.

The goal of the Paid to Play campaign is to make Razer products available to all gamers, reflecting the brand’s inclusive “For Gamers. By Gamers” motto. Three zSilver per minute, up to 900 each day, will be awarded to gamers playing such games as Paladins, League of Legends, DOTA 2, Counter-Strike: Global Offensive, and OverWatch. These titles are among the most popular games played by Razer software users, and this short list alone has an estimated global audience of 138 million players.

“The concept of everyday gamers getting paid to play has never been done by a hardware brand in the gaming industry,” says Min-Liang Tan, Razer CEO and cofounder, in a statement. “Gamers may reap the benefits of a rewards system simply by doing things they’re already doing. The world of gaming is the ultimate even playing field, representing every kind of person in the world. We are excited about helping good people to get Razer products wherever they are, whatever their situations, and regardless of what game they’re playing, as long as they are gamers.”

Gamers with verified Razer IDs and whose games are launched from Razer Cortex are eligible for zSilver rewards. Holders of zSilver can claim exclusive items such as the Razer Mamba Chroma gaming mouse, Razer Blackwidow Chroma, and discounts on various products, among other offers.

Razer’s limited edition Razer Mug Holder, powered by Razer Chroma lighting technology, will soon be made redeemable with zSilver. It’s currently not available for retail sale, but gamers will be able to get it by exchanging 100,000 zSilver. Redemption details will be available in the zSilver Rewards Catalog. To allow for a faster accrual of currency, the first two weeks of the program will reward users with six zSilver per minute of game time instead of the standard three.

Here’s how the virtual currency works: Sign in with a Razer ID and verify your zVault. Then top up your account by adding funds using Paypal, debit cards, or credit cards. You can then shop at Razer partner sites. At checkout, you use your zGold with a “pay with Razer” button. Then you earn zSilver, which can be redeemed for Razer gear.

Razer’s zGold units can convert to dollars at a rate of 100 zGold to $1 in U.S. currency. In a test, Razer had more than 770,000 zVault wallet creations, with more than 376,000 zGold transactions over six weeks. Partners said they saw their sales transactions increase by 12 to 25 percent, compared to a year earlier. And gamers have upped their purchases by 13 percent, all without any promotion, said Rachel Hoon, marketing manager at Razer, in an interview with GamesBeat. 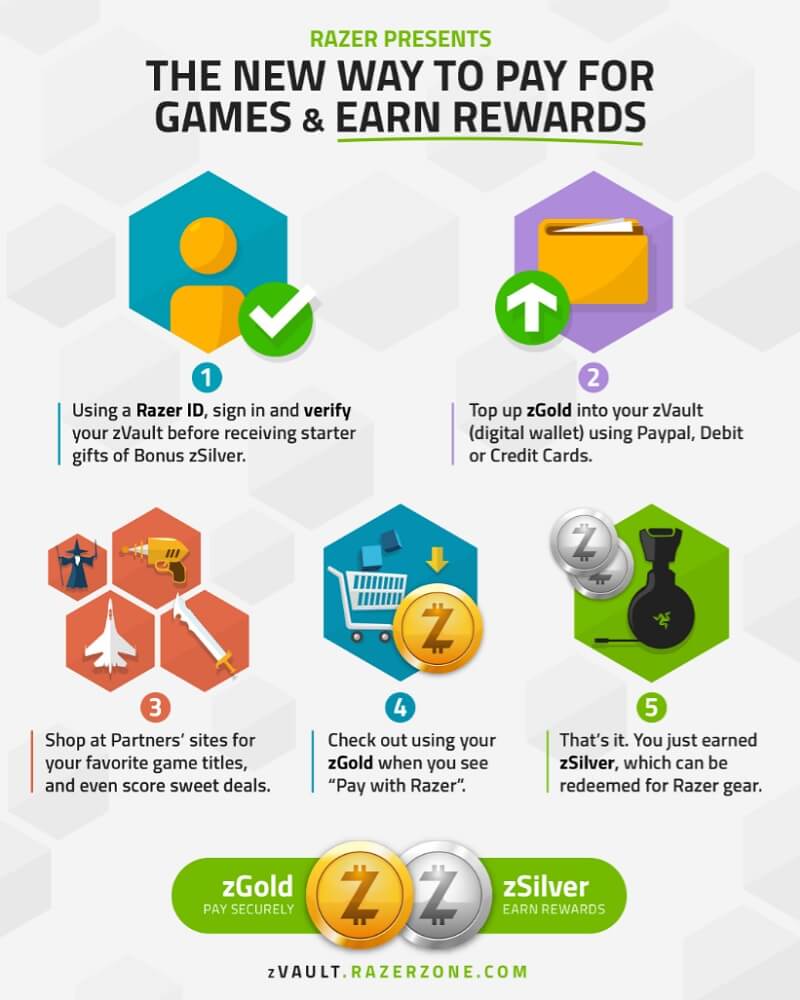 Free-to-play games developed by Hi-Rez Studios (Smite or Paladins) and Smilegate West (CrossFire, Lost Saga) are currently accepting zGold. Game stores such as IndieGala and GamersGate have also collaborated with Razer zVault in expanding their payment offerings, allowing people to purchase games in the form of Steam keys.