On October 26, developer Rockstar Games will launch one of the most anticipated games of 2018 when it releases Red Dead Redemption II for PlayStation 4 and Xbox One. This prequel story got a new trailer today that dives deep into its narrative, which once again explores the end of the Wild West era. The Western is a decades-old media staple, but it still has a lot of unexplored potential for stories. So I don’t want the familiar Old West story about cowboys trying to live free from the ever-expanding state. Rockstar should instead use one of the biggest entertainment releases of the year to deconstruct what the American Frontier myth has turned into.

The setup for the new Red Dead is simple. It is 1899, and the time of the outlaw cowboy and the Wild West is over, and now the government is hunting down the remaining gangs that threaten civilized people. Red Dead Redemption, this game’s predecessor, explored similar themes in 1911. One of the first things players see in the intro of Red Dead Redemption is train-yard workers unloading a Ford Model T off of a shipping container. The implication of that shot is obvious: the modern world had arrived to wipe out the American Frontier and its frontiersman.

The death of the frontier is everywhere in popular media. It is the core theme in dozens of Hollywood Wild West pictures including Butch Cassidy and the Sundance Kid and Open Range. It also informs significant swaths of science-fiction stories set in space. Han Solo in Star Wars: A New Hope is an outlaw and a smuggler who operates in the galactic frontier of the Outer Rim planets beyond the control of the authoritarian Empire. Joss Whedon’s Firefly adapts the Wild West in a more one-to-one manner. Hero Malcolm Reynolds, veteran of a civil war, is a gun-for-hire who hops from one settlement world to another while trying to avoid the authoritarian Alliance.

We get this story over and over for a reason. We see the Wild West as quintessentially American. The 30-year period from the end of the American Civil War in 1865 to the end of mass westward migration in 1895 was a transitional phase for the country, but it has left a permanent mark on how we define ourselves.

We’ve spent almost a century mythologizing those three decades. And that has led to a widespread and ingrained belief that we lost something special and worth keeping. Our society expresses an anxiety for that loss through frontier myth, and we bring it with us into the real world.

Red Dead Redemption II could once again tell us the story of how the United States exploited frontiersmen. These people risked their lives to go west and settle untamed lands in search of their fortunes. But when many people arrived, no gold mine or fertile lands was waiting for them, so they turned to gangs and violence to survive.

But after America had settled the West, it no longer had any reason to tolerate Frontiersman who could not transition back into regimented society. So the law went after gangs and snuffed them out. 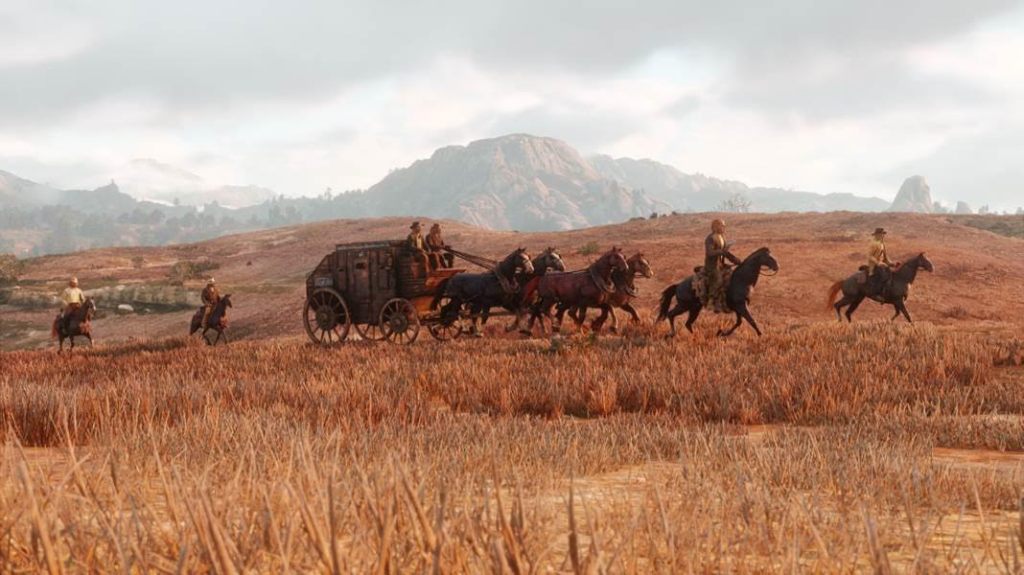 Above: The frontier in Red Dead Redemption II.

Almost immediately, American culture split in half about the fate of the Wild West outlaw. Robert Ford killed the infamous Jesse James to collect the bounty on his life, but most people were sad to hear that the gangster was dead — and few considered Ford a hero. In 1892, Edward O’Kelley shot Ford in the throat in a silver-mining town in Colorado. A court convicted O’Kelley of murder and sentenced him to life in prison, but he only served nine years after 7,000 Colorado citizens signed a petition asking him to be set free. The governor pardoned him soon after.

The story of Jesse James, Robert Ford, and Edward O’Kelley is indicative of how we see the Wild West today. Americans see the Frontiersman as exploited by a country that needed bodies in the west to settle new states. And most people can relate more to Jesse James than the captains of industry and cattle barons that benefited the most from the arrival of the state.

And so the idea of the government as an invader in our lives is woven into the fabric of American ideology. I live in Colorado now, and as someone who came from the Midwest, I can see how the legends of the Wild West still define how this state sees itself.

Colorado is one of a few states (most of which are in the West) where private citizens can propose amendments to the state constitution as a ballot that only needs to win a majority of a popular vote. The people use this all the time. It’s why the state was the first to legalize recreational marijuana. But it’s also the reason the state has the Taxpayers Bill of Rights (TABOR) that has stunted growth and led the economically booming state to have some of the lowest paid teachers in the country.

Because we see the government as an invader, we don’t want to give up the right to bypass the legislator to enact laws on our own terms — even if we end up hurting ourselves. More noxious than that, however, is how we’ve twisted the notion of freedom from the state in order to malign and hurt other people.

Red Dead Redemption II doesn’t need to deal with a lot of these modern problems directly, but I want it to find the threads of American culture that are rooted in 1899 that still are a part of us today. Medicare for all was not on the table at the end of the 19th century, but the arrival of civilization brought with it many advances that were impossible for a lawless land of individuals: women getting the right to vote, protections for workers, businesses, and investors, and eventually highways.

And while the 1899 timing doesn’t lend itself to this (although nothing’s stopping Rockstar from jumping ahead a decade or so), the automobile is probably the best narrative vehicle (sorry) for breaking down the cowboy myth. Car culture is what replaced cowboys in the collective imagination of Americans. We built our entire way of life around the idea of car ownership, and we still associate the act of driving with the freedom of the open road.

But a road is daily reminder that the cowboy ethos is a lie that we tell ourselves. We don’t want freedom from the state. We want to live within it while acting like an oppressed frontiersman when it comes time to pay the dues to fund those roads, a healthcare system, or schools.

Rockstar considers its games satire of America, and it has a chance to move an entire genre forward with Red Dead Redemption II. I hope that it can do just that.