For the first time in many years, Sega seems like it has a strong vision for how it wants to approach game industry. And it is now openly explaining what that vision means.

In a presentation to investors, Sega revealed its “Road to 2020” mission statement. The company detailed a future where it revitalizes dormant properties (IP), expands its existing gaming brands, and builds new IPs — especially for the PC market in North America and Europe. This comes on the heels of a successful fiscal 2017 where the Persona 5 and Total War: Warhammer publisher reported net sales of $1.8 billion (205.7 billion Japanese yen) for the 12-month period ending March 31. That’s up 8 percent year-over-year. But moving forward, the company wants to continue its upward trajectory by diverting its investments away from a diverse group of projects in favor of reinforcing its most promising properties.

As part of the “Road to 2020,” Sega published a series of slides that shine a light on how it plans to do this. As part of a section called “create titles that will become global hits,” Sega detailed how it wants to focus on its intellectual properties first. Here’s how one of the slides puts it: 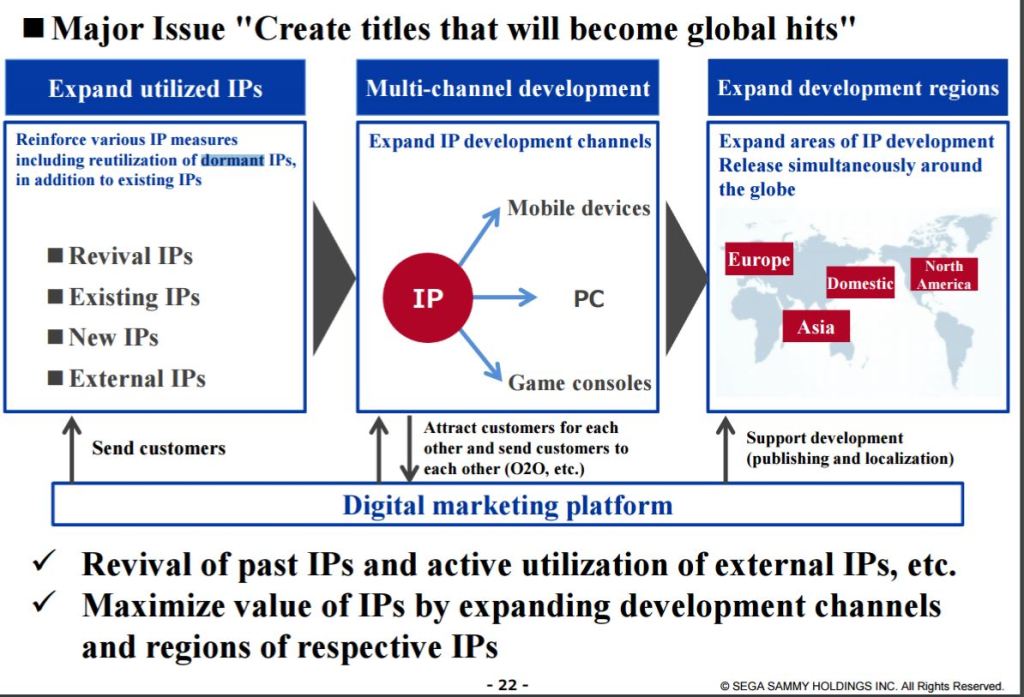 Above: Sega is taking an IP-first strategy.

Sega explains that it doesn’t want to work backward from the platforms it’s working on. Instead, it wants to have strong, recognizable characters and game brands that people will seek out regardless of where they are playing. To accomplish that, the publisher reiterated its desire to use “past IPs” and “external IPs.” But it also wants to beef up the impact of its existing brands by ensuring they have a presence on PC, consoles, and mobile. Sega also wants to launch its games simultaneously around the globe.

In another slide, Sega notes that it is organizing its studios based on the properties they are working on. For example, Sega’s North American teams are building Sonic, Company of Heroes, and Dawn of War. But the publisher wants its teams in North America, Europe, and Asia all also working on new IPs as well.

We’ve already seen some of Sega’s plans to bring back previous IPs in action in recent weeks. Last month, the company launched the original Bayonetta action brawler from developer Platinum Games on PC for the firs time. On May 25, the publisher will do the same with Platinum’s cult-favorite shooter Vanquish. 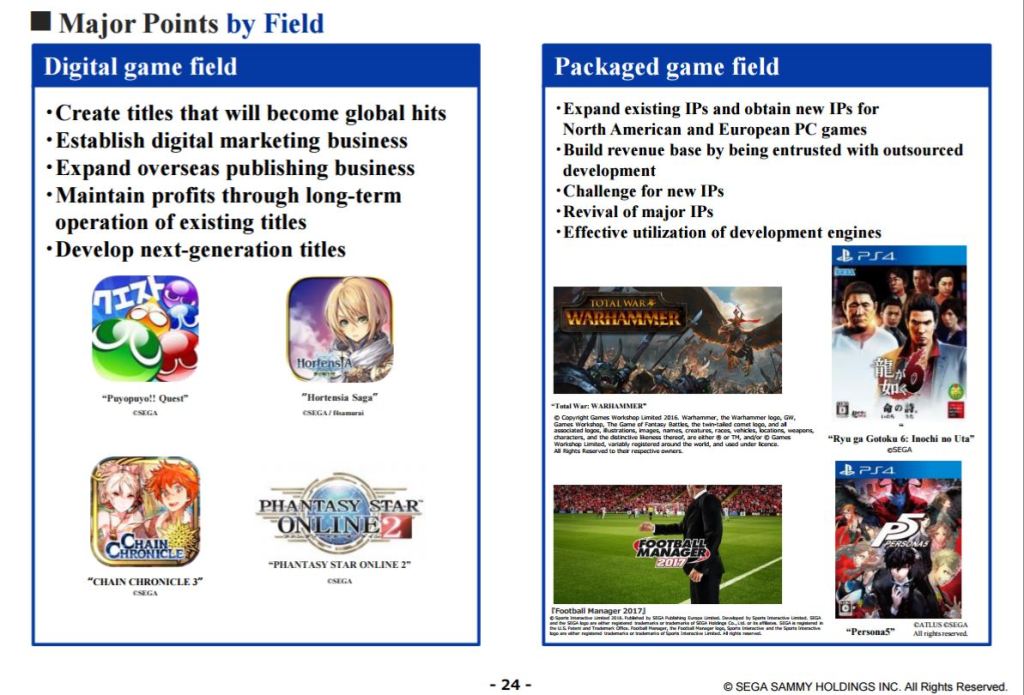 Above: Sega’s goals for digital and packaged games.

Finally, Sega explicitly detailed the biggest bullet points for finding success with digital distribution and packaged retail games. For digital, Sega wants to “establish a digital marketing business.” That could help it move players from one game to another within the Sega ecosystem. As for its packaged-games business, the publisher wants to generate extra revenue as a work-for-hire outsourced development house. It also wants to ensure it is efficiently using game-development engines (like Unity, CryEngine, and Unreal).

But, in the end, Sega is most focused on IPs. The publisher clearly thinks that it can build a successful business by making quality games under brands that people know and love. And hell, it’s working for Disney and Nintendo, I bet Sega could make it work as well.