Electronic Arts debuted gameplay for its much-anticipated Star Wars Battlefront II shooter at an event at the Hollywood Palladium in Los Angeles. I was lucky enough to play a couple of rounds of multiplayer in the Assault on Theed.

I really enjoyed it. In both rounds, I played as a battle droid on the planet Naboo, where our job was to escort a giant vehicle to the palace and take over the throne room. So, it was battle droids against clone troopers, fighting in the prequel trilogy era.

I was able to play a couple of rounds just by jumping into the game, with no instruction from anyone else. And in both matches, I was able to get more kills than deaths. In that way, it was refreshingly accessible. By contrast, when I went into the Battlefield 1 demo with a bunch of industry “influencers,” I got slaughtered. 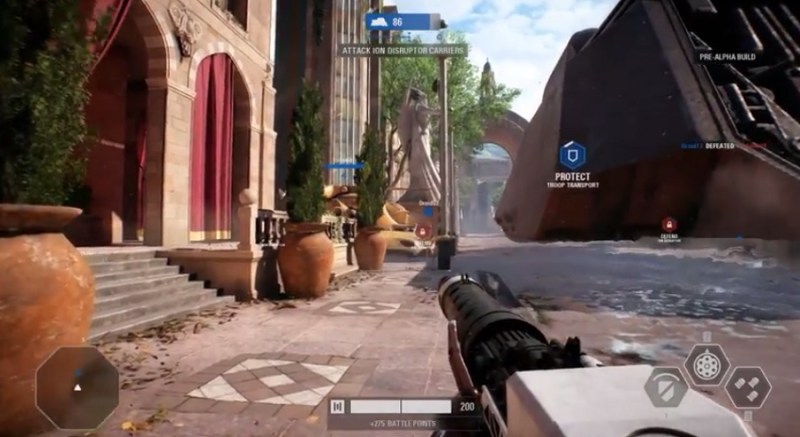 Above: I’m carrying a heavy weapon.

But in this match and map, I was able to get my bearings quickly. Our job as droids was to escort the big vehicle to the steps of the palace and make sure that it blasted its way in. It was a big map. I could choose from a regular assault rifle, a heavy weapon, or a light pistol (held by an officer). I chose the heavy weapon every time.

And it paid off. I was able to sneak off to the flanks of the big avenue and take on the clone troopers while they tried to take down the vehicle in a head-on assault. They often got the drop on me, as you can see in the videos. But over time, I got used to it and took cover. And I pushed forward on the flanks to make sure that I could always shoot at them from the side or behind.

Each time I hit targets, I scored points. And that helped the whole team. By the time I got to the throne room, I had accumulated enough points to become a hero. So, I chose Darth Maul. I was able to jump high to avoid shots and come down hard on the troopers with my dual lightsaber. That was extremely satisfying, but I didn’t figure out how to block shots, so I got killed.

The second time around, I used my points to get a rapid-fire droid instead, and that worked pretty well. In both cases, our team won the matches. And it felt quite good.

EA showed off Battlefront II at its EA Play event at the Hollywood Palladium. The event is the first ahead of the Tuesday opening of the Electronic Entertainment Expo (E3) gaming trade show.

Star Wars: Battlefront II is one of the most anticipated games of the year. EA has several studios working on it, including Motive, Criterion, and DICE. That tells you how much EA is investing into the franchise. 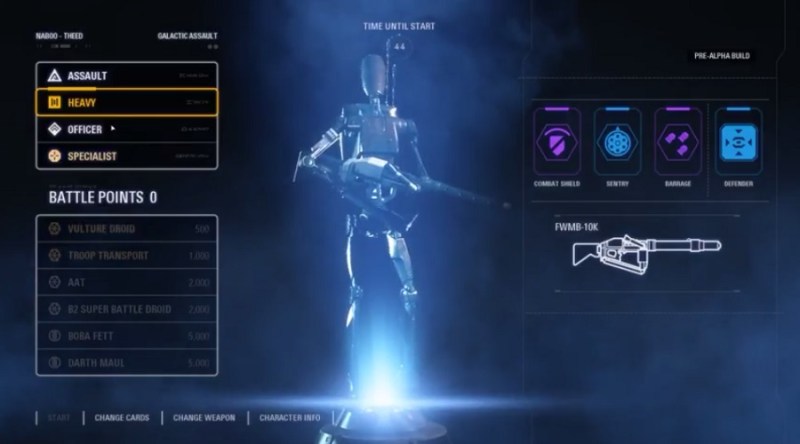 Above: The Battlefront II spawn screen.

The game will include free content drops that arrive after the game ships, including a mix of new locations, characters like Finn and Captain Phasma, and other things inspired by the upcoming film Star Wars: The Last Jedi. 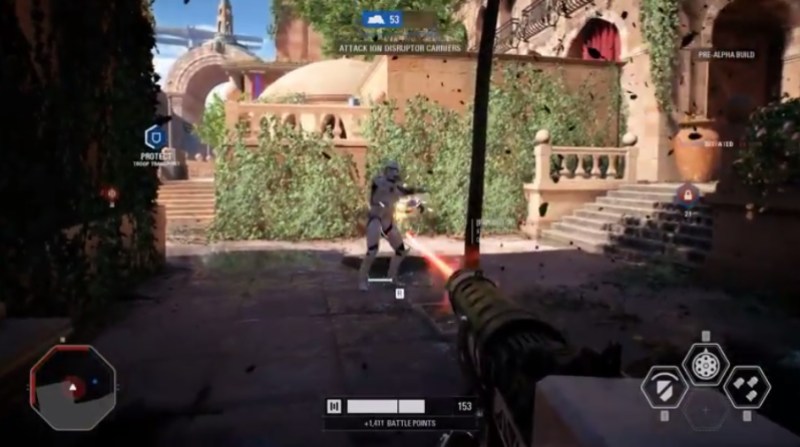 Above: Take that, clone trooper.

Through the relationship with Lucasfilm, this season will include Finn and Captain Phasma as new playable heroes, a new planet location known as Crait, a new space map above D’Qar, new events, rewards, and more.

Players at EA Play will be able to experience the Assault on Theed demo, which features the updated signature multiplayer mode, Galactic Assault, on the Naboo: Theed map set in the prequel trilogy era. Players will get a sample of the new class system, ground and air vehicles like the AAT-1 and Naboo N-1 starfighter, a larger focus on team-play, and heroes from all eras — including Boba Fett, Darth Maul, Rey, and Han Solo.

Here’s the second round of my gameplay.