Last year was a big one for Valve Software’s Steam. The PC game-distribution platform had a massive audience that engaged even more with gaming during the ongoing global pandemic. That led to an increase in game purchases of 21.4% year-over-year in 2021. Valve summed up the growth in its 2020 year in review blog post.

“While Steam was already seeing significant growth in 2020 before COVID-19 lockdowns, video game playtime surged when people started staying home, dramatically increasing the number of customers buying and playing games,” reads the Steam blog post. “And hopefully, bringing some joy to counter-balance some of the craziness that was 2020.” 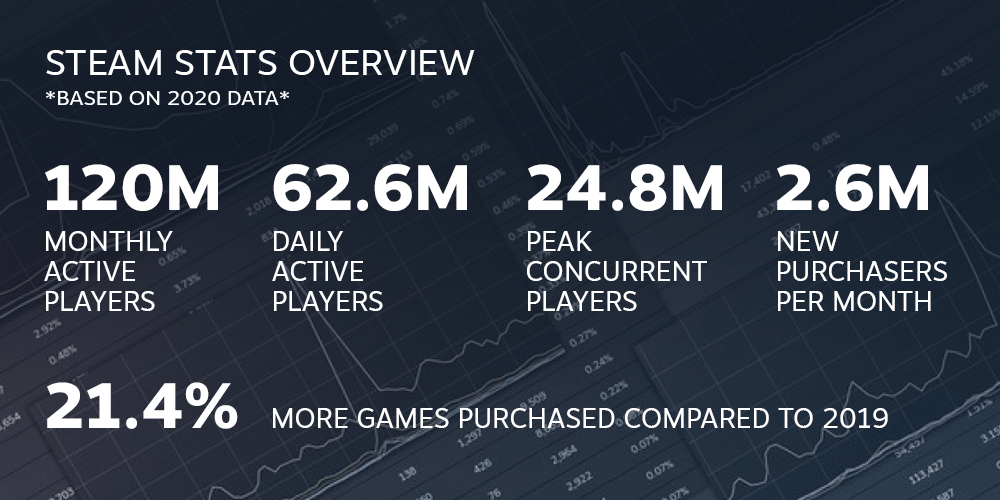 Valve was ready to handle the new customers because it regularly sees similar influxes during its Steam sales.

“The enormous increase in the number of people buying and playing games is a good problem for us to have — one that kept our operations teams busy managing the increased demand on our servers and network infrastructure,” reads Steam’s blog. “At the start of March, there was a 30%-to-40% increase in total traffic related to game downloads; this is less than the bump we usually see during a sale, so it was fairly easily handled.”

Steam delivered a record 25.2 exabytes of data to its users in 2020. That was due to the pandemic, but also because of the launch of a major game in December. “In combination with one of the biggest launches of the year in Cyberpunk 2077, we hit a record for download traffic of 52 Tbps — 26 Tbps just for the preload period alone — which doubled our previous peak,” reads the Steam blog. “In spite of the lockdowns, we still managed to completely upgrade 1 of our network sites (Chicago), and add three new sites (Frankfurt, Dallas, Buenos Aires), with at least another two-to-four in the pipeline for the first half of 2021.”

Valve’s traffic was so intense that it was part of conversations with governments around the world about bandwidth usage.

“Various countries’ government bodies approached us and other large Internet companies to see how we could help mitigate the rise in global traffic that ISPs were seeing, because it was getting to a point where it was affecting people’s ability to work from home and their children’s remote schooling,” reads the blog post. “In response, we made some changes to help manage the bandwidth during work and school hours, and to defer updates to the evenings.”

As for Steam in 2021, Valve pointed out a number of upcoming projects including the launch of Steam China. Valve is working with Chinese conglomerate Perfect World on that. But the company is also focusing on improving the Steam experience this year as well as launching new Steam Labs features.