Spry Fox has been making a new kind of bullet hell game for the past five years, and the indie studio is finally ready to show off Steambirds Alliance. And unlike other games in the genre, it’s pretty hard to grief other players.

It’s a beautiful PC game, one where every explosion is colorful and you are in an airship fighting against other flying objects in a 2D scene. Like in other bullet hell games, your job is to keep shooting at everything that moves and avoid getting hit yourself.

Seattle-based Spry Fox made the game as a kind of spiritual successor to Realm of the Mad God, a bullet hell massively multiplayer online shooter that came out in 2011. Spry Fox worked together with Wild Shadow Studios on that game, and it was played by millions. But Kabam acquired it in 2012, selling it later on to Deca Games. Studio cofounder David Edery wasn’t quite done with the bullet hell genre, and so Spry Fox went off on its own. 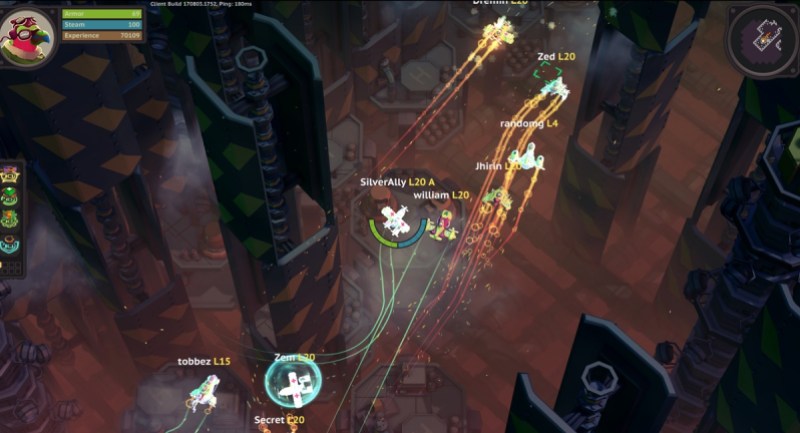 After doing numerous other games, Spry Fox is close to launching a beta test of Steambirds Alliance, which I played in a co-op session with Edery. He thought to show it to me after my Cuphead kerfluffle, when everyone was making fun of my poor game play. That’s because Steambirds Alliance was built as a game where you can’t really cause a lot of grief to other players. It’s a friendly co-op game, with no player-versus-player mayhem.

“There are a number of attitudes in gaming that I find odious,” Edery said. “I dislike is the attitude that competitive games are necessarily the pinnacle of multiplayer gaming; domination and clawing your way to the top of the leaderboard above all else. We wanted to make the most co-op game ever.”

The art is a blend of 2D and 3D art. You’re a scrappy rebel bird trying to take over a giant empire of cats. You get into your aircraft and start shooting at other planes in a 2D space. You can pick up various kinds of weapons that can take out bigger and bigger targets, and you can collect armor to protect yourself. The game’s background has a lot of 3D depth, adding to the beauty of the steampunk setting. 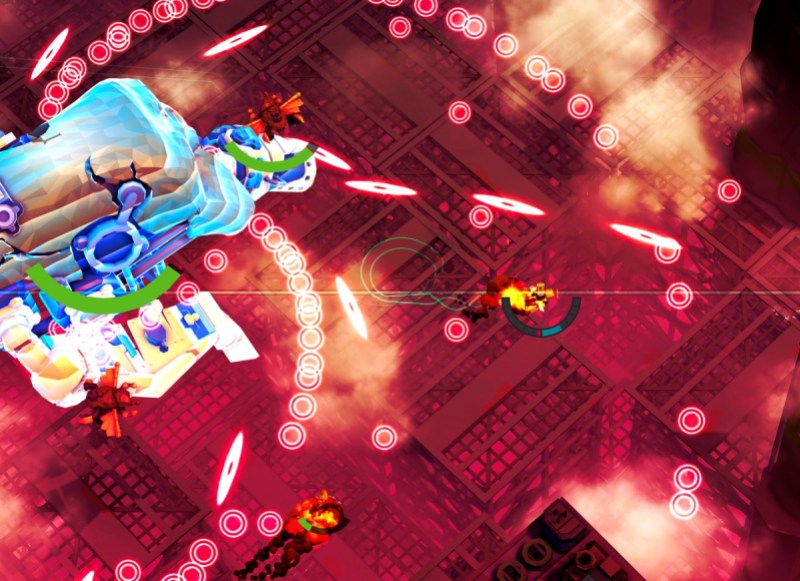 Above: The bosses are so colorful in Steambirds Alliance.

While there is plenty of shooting and domination in Steambirds Alliance, it’s all against the computer-controlled enemies that keep spawning around you. It’s a violent game which tries to eliminate the toxic environment. In fact, it makes it very hard for your teammates to annoy you.

You can’t, for instance, steal the loot for yourself when you defeat a boss. If two people take down a boss, both of them get loot drops. Your teammate can’t betray you. The whole point is to encourage strangers to become friends and enable high-skilled players to play with low-skilled players.

Everything about Steambirds Alliance is meant to get you into the thick of the fight. You don’t have to move far to join your friends. You can teleport for free to anyone else on the map.

“We wanted to make it completely painless to join people in the middle of a session,” Edery said. “We want people to spontaneously join up.”

In Realm of the Mad God, it was possible to grief other players by getting them to teleport to you in an extremely difficult situation. Whoever teleported to you would die almost immediately. To deal with that, Spry Fox put in a 3-second segment where you are invulnerable after teleporting.

You can also easily heal a large group of friends if you invoke a special power at the right time. 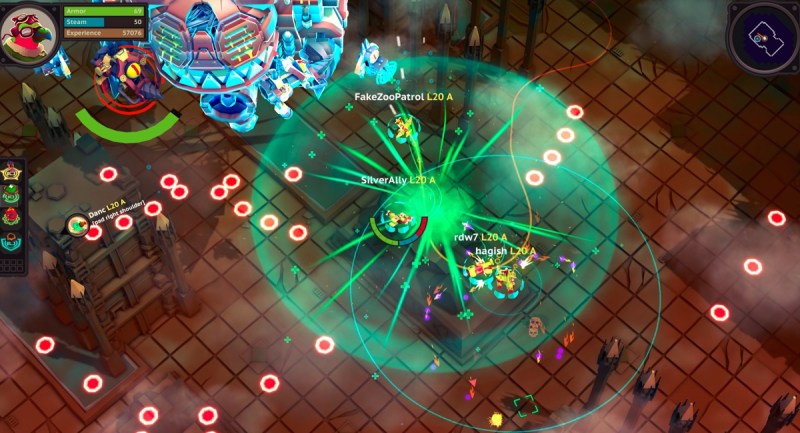 Above: Steambirds Alliance is a spiritual successor to Realm of the Mad God.

“It’s not a place where you shit on other people,” Edery said. “People are good, and they need a place to be good. We’re going to give it to them.”

While it’s a friendly co-op game, Steambirds Alliance isn’t casual. Every match has a whole lot of mayhem and loud klanging of iron against iron. It takes a lot of skill to beat the bosses and stay out of their way while they’re shooting at you. It has permadeath, which means you lose your stuff when you die. But that’s not horrible, as it takes you maybe a half hour to build yourself back up after you die.

Edery and his cofounder Daniel Cook built their studio “for the express purpose of making people happier.” They want to foster good social behavior, and Steambirds Alliance is the way they’re going to do it. The game is expected to launch in the second half of 2018 on Steam.

As for why it took a long time, Edery said the team spent lots of time getting the game mechanics right for the bullet hell game. About nine of Spry Fox’s 18 people worked on the game.

“We are close to being done,” Edery said.