First off, spoiler alert, I’m giving Super Monkey Ball: Banana Mania a 5/5. This may seem silly to some of you. Yes, this is in many ways a simple game. You have a monkey. They’re in a ball. And you have to tilt that ball toward the goal.

This is also a remaster. Well, sort of. Banana Mania contains all of the levels and minigames from the first three Super Monkey Ball games. But many of them have seen changes (don’t worry, you can unlock the original versions too). The format is also different here. Before, you had to beat the campaign before running out of lives. Like with many modern games, the lives concept is gone here now. If you die, you can keep trying.

So, yeah. I’m giving a 5/5 to a remastered compilation of Super Monkey Ball. Banana Mania is some of the most fun I’ve had gaming this year. If you pick this one up when it launches on October 5 for Switch, PlayStation 4, Xbox One, and PC, I bet you’ll have a similar experience.

By the way, I played on Switch. If you’re worried about getting Banana Mania on that platform because of Sega’s lackluster port job with Sonic Colors: Ultimate on the system, don’t be. Banana Mania runs great on Switch and runs at a smooth 60 fps (as long as you’re not playing split screen multiplayer — then the framerate expectedly drops a bit). 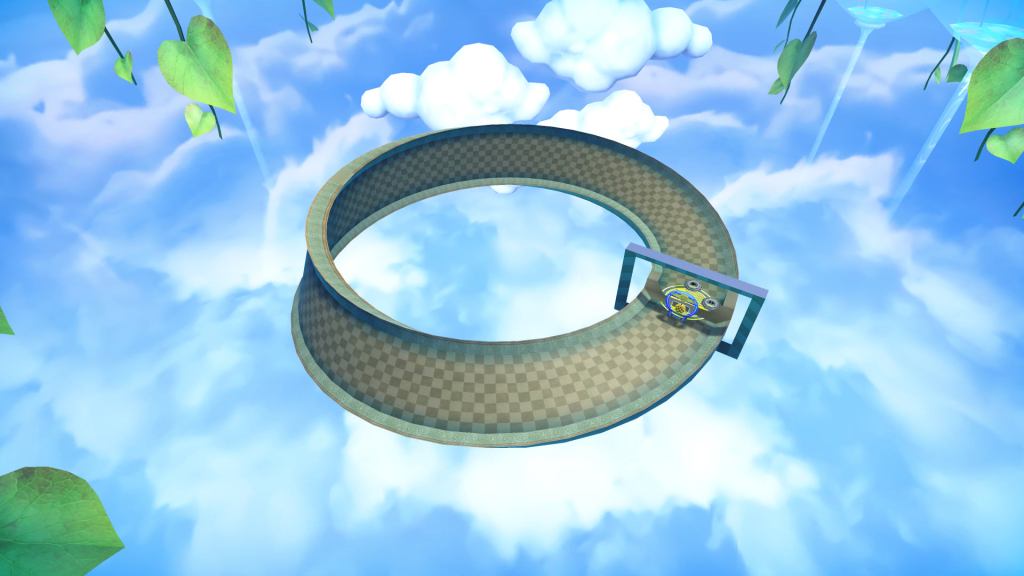 Above: Levels can get pretty wild.

OK, so why do I love Banana Mania so much? First off, Super Monkey Ball is fun. It was fun back when I first played it as a GameCube launch game. It’s still fun in 2021. It’s a simple concept that allows for some creative, challenging levels. Sometimes you’re just navigating your monkey through a relatively simple obstacle course. Other times you have to grasp more unique concepts or gimmicks, like using different switches to speed up, reverse, or pause spinning platforms so you can cross safely.

These levels can be challenging, but with some patience and thoughtfulness, you’ll eventually conquer them. And now that lives aren’t a thing, you don’t have to worry about too many failures forcing a game over and making you replay levels you already beat. Sure, sometimes you’ll come across a stage that you’ll get stuck on for what can feel like hours. But, dang, it sure does feel good when you finally cross the goal line on those ones.

I’m also a big fan of any game with fun unlockables, and Banana Mania delivers here. You earn points by playing, and you can use these to earn new characters, costumes, and even game modes. This is how you can unlock other Sega stars, like Sonic and Tails, as playable characters. You can even purchase a jump button that you can use in the single player content.

None of these goodies are too expensive, so you’ll be able to unlock what you want just by playing a decent bit of the main game. 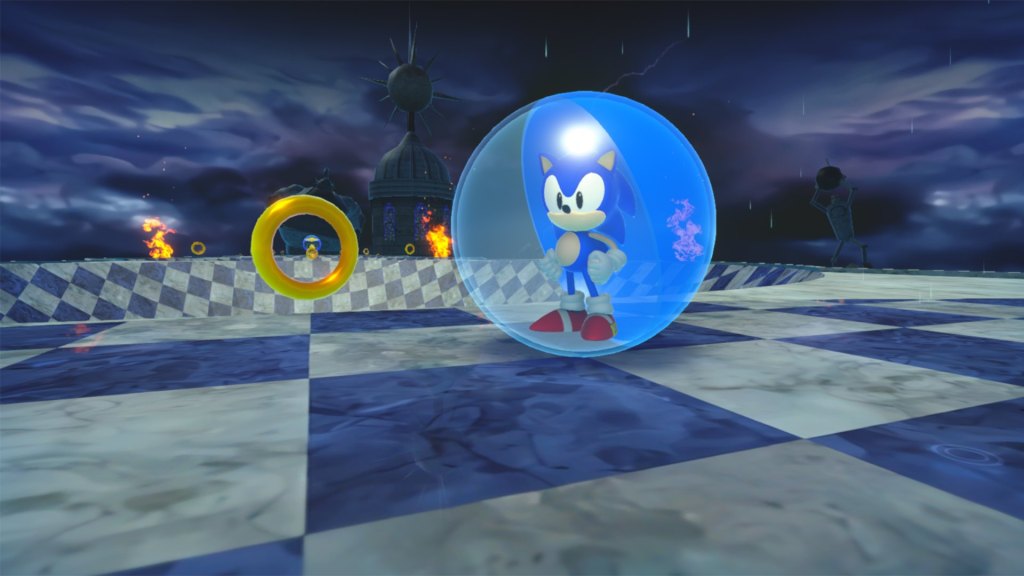 Above: Sonic is in Monkey Ball!

If you ever play Super Monkey Ball before, you know that party games are often the best part of the package. Banana Mania comes with 12 of these multiplayer minigames. This includes Monkey Fight, which has four players rolling around and trying to punch each other off a platform while battling over upgrades. You also have Monkey Racing, a surprisingly decent kart racing-like experience. Monkey Billiards, Monkey Tennis, and Monkey Bowling are exactly what you expect, and somehow better. I mean, Monkey Bowling is pretty much everything I need from any bowling game.

And then you have Monkey Target, probably the greatest minigame of all time. In this one, up to four players roll down a hill, shoot off a ramp, and float their way to far off targets. Then they try to land on zones that are worth the most points. It’s like competitive Pilot Wings.

Again, this sounds simple, but it’s stupid how fun this is with friends. In one memorable game, me and three buddies were shooting for a long strip of land. The furthest, smallest part of this island just before the edge was worth the most points. The first one of us to reach this area deployed too late and just landed on the platform flat on his monkey stomach. Then the next person reached the second-best score zone. Not bad. And then I flew in and knocked him off. We both fell into the scoreless ocean. We were all howling, and then the last of us soared down and landed on the last inch of the section that awarded the prime points. At this point, we were all off the couch and jumping and screaming with excitement.

These minigames are just fantastic to play with friends in the same room. And it’s easy to swap between them. You can play a round of bowling, then do a bit on Monkey Target, and maybe finish off with a single race or a bout of Monkey Fight. The variety is incredible and can make an evening of gaming with friends pass quickly.

Yes, Banana Mania is essentially just the kind of Super Monkey Ball game that you’d expect. I just didn’t realize how much I’ve missed this series. The single player levels present a challenging and creative experience, while the minigame offerings make this collection essential to anyone who likes to play local multiplayer.

This is the best Super Monkey Ball has ever been.

Super Monkey Ball: Banana Mania is out on October 5 for Switch, PlayStation 4, Xbox One, and PC. Sega gave us a Switch code for this review.