Tony Parisi helped pioneer virtual reality when he worked on the Virtual Reality Modeling Language (VRML), a tool for creating 3D environments on the web, with Mark Pesce back in 1994. Now he serves as head of AR/VR strategy at game engine maker Unity Technologies, and he talked today about his hopes and fears about VR in an opening talk at the Silicon Valley Virtual Reality Association (SVVR) event in San Jose, California.

Parisi said he took a long break from VR until 2012, when he tried out the Oculus DK1 VR headset prototype. He felt it wasn’t ready yet, that is was too big and made him woozy. But he changed his mind when Facebook acquired Oculus for nearly $3 billion. And now he is “all-in” on VR.

He noted that Unity is cautious about the growth of VR, as we are in a “gap of disappointment” after the launch of consumer VR in 2016. But his company believes in it for the long term and is in “lockstep with all of the developers” who want to create VR apps. 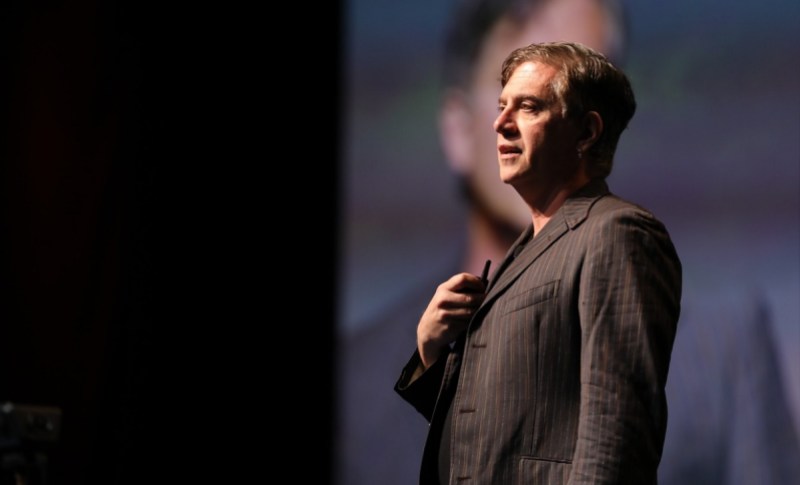 Above: Tony Parisi at SVVR.

But he said we should first stop and think about “what is reality?”

“When lies, no matter how brazen, can get us to questions the very nature of reality itself?” Parisi said.

Social networks and direct TV broadcasts can make you believe something other than what the facts suggest. What happens when VR will be able to trick all of our senses?

“We are OK for now,” he said. “But what happens when VR is deployed at mass scale and VR becomes the web and the web becomes the metaverse?” referring to the name for the virtual world in Neal Stephenson’s influential sci-fi novel Snow Crash from 1992.

“What happens when I can see something at my feet and jump into it?” Parisi said. “What if we can jump into a clan and go kill some people. That is OK, because they’re not real. Even if they are, they are not us.”

That was his cautionary advice about VR. But he also said that he was impressed with VR’s capability to create empathy, escape, embodiment, and engagement.

He noted that Chris Milk, the creator of the VR documentary 360-degree film Clouds Over Sidra, said that virtual reality is the “ultimate empathy machine.”

Parisi said VR can put you in the shoes of another person and show them what the world looks like. Parisi recommended that you try out Construct Studio’s The Price of Freedom, where your job as a CIA agent is to assassinate a radical who stole chemical weapons research.

“It makes us into a protagonist, more than a witness,” Parisi said.

He also said that there are times when “your capacity for self-enlightenment only goes so far.” You need to escape, and VR is great for that. Parisi pointed to Asteroids!, the VR video from Baobab. Parisi also praised The Dreams of O on the Oculus Rift for its mesmerizing look at Cirque entertainers.

“The best VR entertainment creates a new world for us to inhabit,” Parisi said. “VR is the ultimate escape pod. We could all use some of that right now.”

Not only can VR take you somewhere else and immerse you in it, it can also make you feel what it’s like to be embodied in something or someone else. He pointed to The Life of Us, where you start as a protozoa and evolve into a human.

“You have a sense of self, and you see the other person you are on a thrill ride with,” Parisi said.

Lastly, Parisi said VR is good for engagement. He pointed to the Jaguar Electrifies VR video, where you can interact with a car and inspect it in the most minute detail while in virtual reality. Such experiences can produce analytics, such as how you react physically to something. At some point in the future, brands will be able to analyze the sentiment based on the subtle body movements, and come to a conclusion about how someone feels about that particular brand, Parisi said.

“I’m hoping that collectively we can make the world a better place,” Parisi concluded. “Have fun. Make money. But change the world, hopefully for the better.”