I find it amusing that a the resurrection of a beloved retro game is itself retro now.

I’m talking about King’s Bounty: The Legend, which came to PC in 2008. It’s a rebirth of the original 1990 game from New World Computer (made by the same folks behind the Might and Magic series, and it’s a progenitor for the Heroes of Might and Magic). 1C Entertainment put out a number of expansions and standalone releases over the next six years, culminating with King’s Bounty: The Dark Side in 2014.

I got excited in 2019 when 1C and Deep Silver announced that King’s Bounty II was coming in 2020. Steam says I’ve put in 630 hours into the series. Like Civilization, it’s a comfort-food game for me. So of course I’m excited that a sequel is on the way. And it’s taking a bit of a different direction; the sequel is a merging of open-world RPG with tactical combat, and it’s ditching some of the lighter tone and artwork of previous games. You still choose one of three heroes (warrior, mage, or paladin), and you’re still exploring, taking on quests, buying new units for your army, and searching for treasures.

Of course, 2020 being that most awful of years, it got postponed to late March. And February 11, Deep Silver moved its release date again to August 24.

King’s Bounty: The Legend and its siblings have you exploring a series of maps (some are islands, others are realms). This time, 1C is taking us to an open world, and I’m quite curious about how it goes about this.

In a demo in November, we saw a typical fantasy-medieval realm. Now, these are standard in the series, but they’ve always been bright and vibrant, with lush colors, the clop of your horse’s hooves, and other details. As you advance through the campaign, you encounter different areas, such as sylvan glades, snowy wastes, muddy bogs, fiery hellscapes, and underground caverns. Here, you’d fight against foes suited to those environments and pick up troops that live there (like elves in the glades, demons in the hellscapes, and so on).

1C showed off a village, some snowy lands, and some interior building shots. The thing that’s different here is it has people and interiors. Before, you’d go to a shop or an inn, and a mugshot would pop up with text interactions or what you could buy. If you hit up a castle, you’d go to a screen with the ruler and may see another occupant or two and whatever units and items it had for sale. 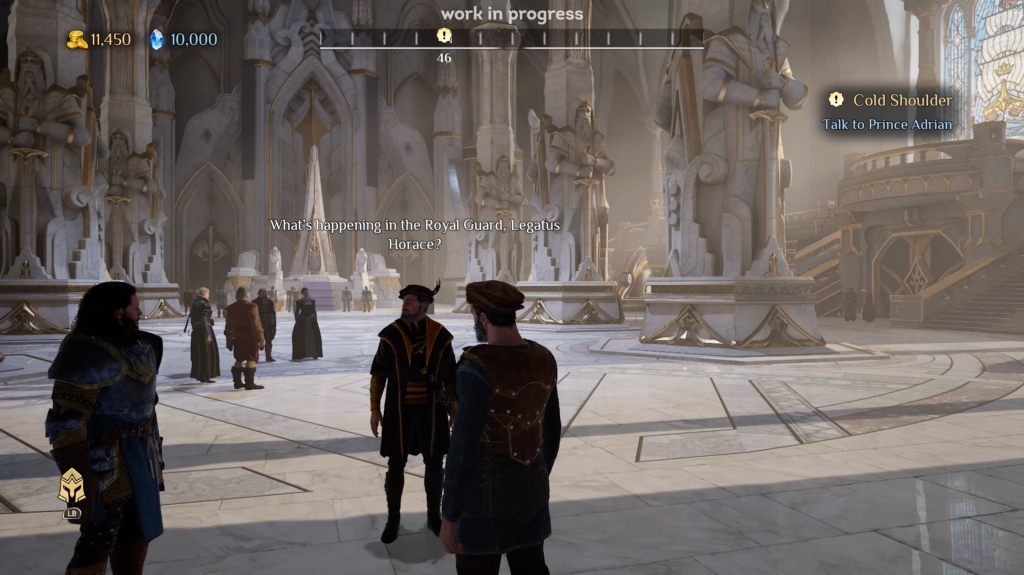 Above: Maybe we’ll be able to have some more character interaction thanks to King’s Bounty II’s new direction.

Interiors with people mean you might actually get a chance to explore locations outside of the main map and combat, and I’m hoping this could lead to interactions with NPC and a deeper story.

Battle lineups look more lively as well. Like in many tactical and strategy RPGs, your units look like singular entities despite how many you might have. Say you have a troop of 54 skeleton archers? You just see one on the screen. In this sequel, your units are made up of multiple icons (though I doubt I’m going to see 200 spiders at one time).

And having people outside in villages, town squares, and other locations will help give King’s Bounty II not just more ways for the player to interact with the world (quests and such) but help this open-world feel more vibrant.

But I do have two concerns: Will this make King’s Bounty II more vibrant, and will it detract what from the core loop of building your armies and taking on foes? 1C says it plans for a more serious approach with building Antara, and I understand the studio’s desire to make a more mature RPG. King’s Bounty does have a light tone (you can recruit a cute dragonet companion in one game), and I’d be happy to see it ditch bikini-like armor sets for its women characters. But that light tone is part of its charm, along with the Civilization-like “one more turn” appeal of looking on the next island, down the next path, to see what new recruits you can add to your armies.

King’s Bounty II remains my most anticipated RPG of 2021. I just hope it nails both tactics and tone.

Above: I’m as hungry as an illithid tadpole for the Second Act of Baldur’s Gate III.

2021 looks like it’s going to be a pretty good year for RPGs, though with so many studios making games these days, it feels like every year is good for RPGs now.

Here’s what I have my eyes on this year. Note — recent dates may chance, especially for those that publishers have only said are coming out “in 2021.”