My eldritch archer pulled her bowstring. It crackled with magical energies, both from her enchanted weapon and her Acid Arrow spell. She fired, and first the spell and then the electric arrows slammed into the troll. They hit with a thunk, and after the third missile, the monster groaned and fell face-first into the turf. As my archer fired away, I plotted courses for my frontline fighters to advance on the other trolls as my priests buffed them and my mage softened them up.

Now, I can do all of this in the the original Pathfinder: Kingmaker. But it could be a pain to manage it. This 2018 PC role-playing game launched as part of the old-school revival of the style first set by Baldur’s Gate and the Infinity Engine stars of the late 1990s and early 2000s, with real time/pause gameplay (where you fight in real time but can pause the action to make decisions, cast spells, target foes, and so on). Kingmaker offers plenty of quests, a detailed storyline, a base with missions tied to it, a dizzying amount of character customization, and so on. This is everything you’d expect from such a game.

But where Larian Studios made the brilliant choice to move from real time/pause to turn-based combat with the Divinity: Original Sin series, Owlcat Games (like Obsidian Entertainment before it with Pillars of Eternity) stuck with Infinity Engine tradition. And this hurt Kingmaker, bogging down combat and limiting the tactical choices that come with Pathfinder’s class system.

The Definitive Edition fixes this. It launched August 18 on PC, PlayStation 4, and Xbox One, and I’ve put in about 20 hours into the PC and PS4 versions. And it’s turned combat from a drag to one of the RPG’s highlights.

Now, I can deal with real time/pause combat. I can even like it. But I find it tends to force you into situations that you don’t find in turn-based battles. Your front-line warriors tend to huddle up with the enemy in real time/pause. Enemies cast spells, sometimes at the same time, resulting in your splitting attention between what your warriors are doing, what your ranged folks are up to, and what your spellslingers are throwing about.

It can be chaotic, like in a real-time strategy game. Now, I enjoy these as well, but if you give me the choice between reacting to units coming at me while also managing my resources and troops between a turn-based affair, where I can take time to plan out each movement, I’ll take the latter, every time.

I think about one of the key encounters in Kingmaker: the battle with the Stag Lord.

The first time I dealt with this in 2018, the Stag Lord (an early boss, with a band of bandits at his beck-and-call) wiped me out. You end up fighting several groups of foes: The Stag Lord and his lieutenants (who are no slouches), some other bandits behind you, and a grumpy owlbear that breaks free from its bonds and takes out its fury on everything that moves.

Now, you’re dealing with your units plus another 15 or so enemies, some of whom have the high ground and blast away at you with their powerful bows or clerical spells. It can be chaotic managing all of it, and the first time I went into this battle, I didn’t manage it well at all with real time/pause.

Two years later, I found this battle to be far easier to manage, but it’s still a challenge. Two of my party found themselves down-and-out during this engagement. But I did find planning on how to divide my forces, use my abilities, items, and spells, and maneuvering on the battlefield smoother than I remembered.

The biggest change I’ve found in my approach to combat is how I use scrolls and potions. Before, I’d just drink a healing potions, ignore my scrolls, and rely on my spells for magic. Now, I find I have the time to plan out how I’m going to engage my foes, how I’m going to prep, and how to react to their actions.

Turn-based combat isn’t for everyone. But if you’re like me and enjoy the more tactical approach you get from Divinity: Original Sin, you’re going to dig this change to Pathfinder: Kingmaker. 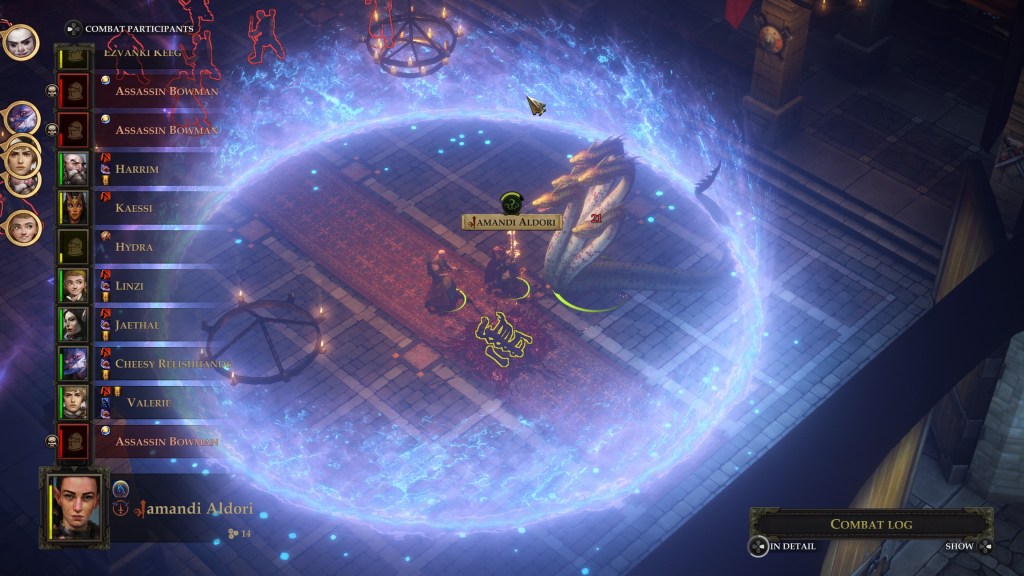 Above: Hey, who put a hydra in my throne room?

Early this year, I decided the pandemic is a fine time to teach my kids Dungeons & Dragons. We’ve been playing our campaign most weekends, and they spend time reading the fantastic Young Adventurer’s books, drawing their characters, and playing with their characters’ miniatures.

Turns out playing Pathfinder: Kingmaker with them on my PlayStation 4 is an excellent complement to this (after all, Pathfinder’s rules come from an older version of D&D). And Owlcat did a pretty good job of adapting Pathfinder’s PC controls to a gamepad. I did find some issues:

The biggest problems have been with graphics and music. In the Sycamore Caves, four of my six party members … went invisible after loading a save from the previous night. They were there, but I couldn’t see them. I this happened after restarting the game. Weirdly, moving to another area in the caves fixed this. And Kingmaker kept having issues loading music into scenes and new areas. I don’t mind it being quiet, but my kids thought it was weird that the background tunes would just … disappear.

So as I play my elven eldritch archer on my PC, I’m exploring the Stonelands with my gnome alchemist with my boys, and we’re having a hoot. And outside of Divinity: Original Sin, Pathfinder: Kingmaker may be the best way to enjoy a D&D-like RPG that’s not one of Beamdog’s enhanced editions based on the now-archaic 2nd Edition rules or Neverwinter. Or until we get more news about Owlcat’s next Pathfinder game: Wrath of the Righteous.