It was so much easier to dismiss the paranoid fantasy of George Orwell, the author of 1984,  many years ago when I first read his novel about a totalitarian state and its “Big Brother” that was always watching your every move.

But you only have to read the headlines of this week — that Wikileaks obtained a secret trove of tools that the CIA used to circumvent the security of smartphones, communications apps, and other devices — to see that Orwell is only becoming more relevant with time. The disclosures reinforced the evidence that Edward Snowden revealed in 2013 that showed the government routinely spied on everyone. Snowden tweeted this week, “Critical to investigate if, and for how long, CIA permitted the most popular U.S. smartphones to remain vulnerable after learning of breach.”

Above: Orwell lets you play the role of an NSC-like investigator.

Snowden’s disclosures in 2013 inspired Osmotic Studios, a Hamburg, Germany-based independent game studio to create a PC game called Orwell. It’s about the consequence of living in a police state where everything about a person is exposed to investigation. This game is a perfect example of what I mean when I say that there’s an inspiration cycle between real-world technology, science fiction, and games — the subject of our upcoming GamesBeat Summit 2017 event on May 1-2. For good or bad, we are living in a world where paranoia is a legitimate response to everything around us.

Last week, I met with Melanie Taylor, the art and business lead at the three-person studio, at the Game Developers Conference in San Francisco. Surprise Attack Games published Orwell on Steam on the PC last October. I played the game as well and found it to be very relevant and troubling.

“We started in 2014, about nine months after the Snowden revelations,” Taylor said. “That was the main inspiration. We were worried it would be out of date. The scary thing is that it has become more timely. We wanted to set it in the future, but not too far, so players can relate to it more. Your first work day in the game is April 13, 2017.” 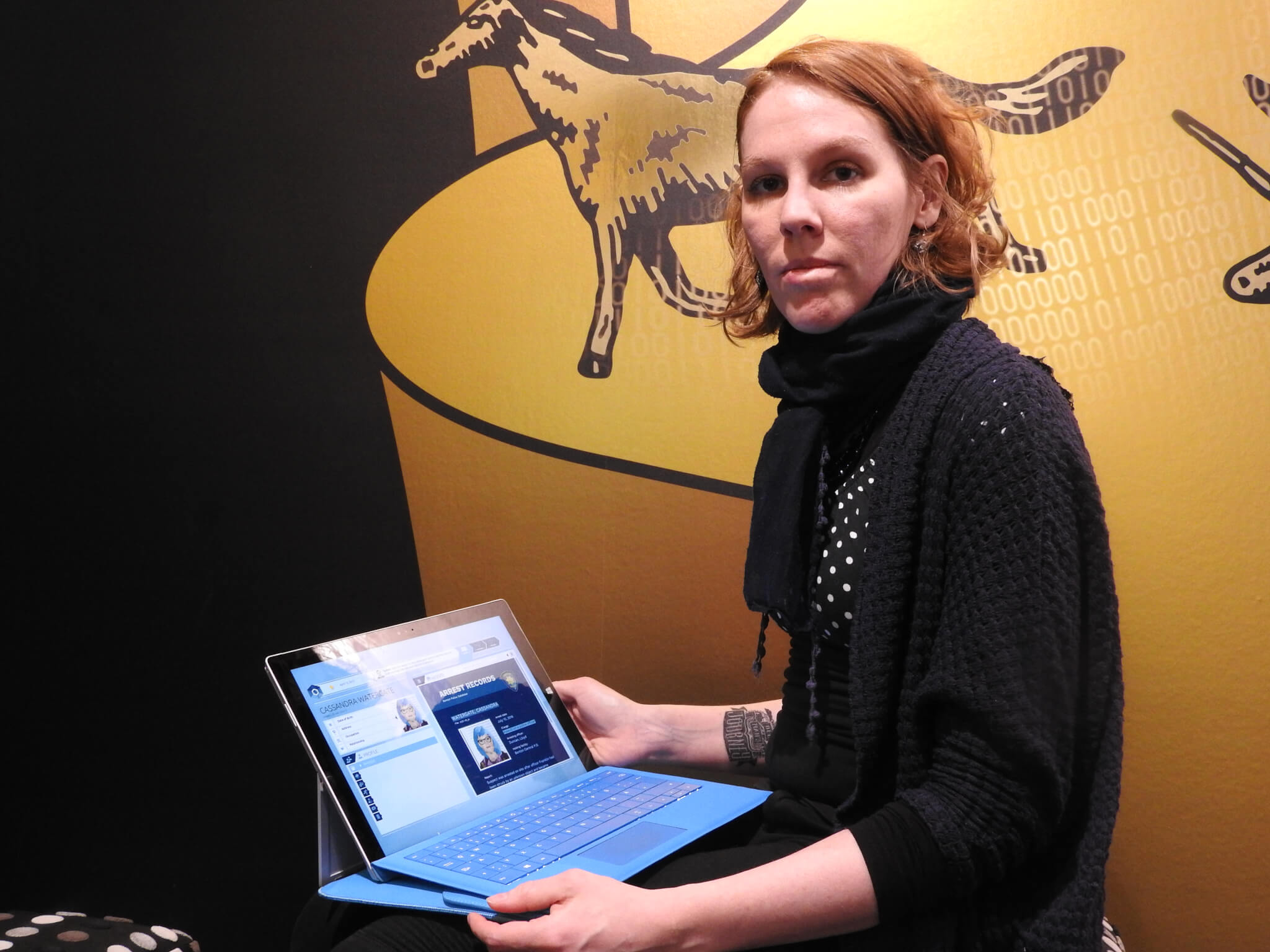 Above: Melanie Taylor shows off Orwell at GDC 2017.

That’s about a month from now. Orwell took me about five hours to play all five episodes of the game, which has a gripping narrative and haunting music. The art style is low-resolution polygons, which isn’t what you’d expect in a dystopian game.

You play as a human researcher using a sophisticated government security program called Orwell, which has the power to delve into the lives of private citizens and analyze surveillance across the Internet, personal communications devices, computer files, and cameras. It’s not so different from the big data analysis technology from Palantir Technologies, the Silicon Valley company founded by billionaire Peter Thiel. You can’t help but feel guilty investigating the lives of people who may be innocent. Just like our Patriot Act, a Safety Bill has expanded the fictional government’s ability to spy on citizens in the name of security.

“1984 is very dystopian. The things that happen in Orwell’s 1984 are really extreme and very bad,” Taylor said. “We didn’t want to push the player completely in that direction. We wanted to have the player judge whether this is right or wrong. It is supposed to ask more questions than giving answers.”

At first, your job is to investigate a suspect who was at the scene of a bombing in the capital city called Bonton. You work with an advisor who takes your data and recommends actions by security forces.

The suspect is a woman who is a member of an activist group, and so your investigation quickly grows to include the members of the group and it spirals from there. You are Big Brother, and you have to make tough calls about what information to disclose to investigators about what you find out about each person. The information can lead to the arrest and imprisonment of people who may not be criminals. 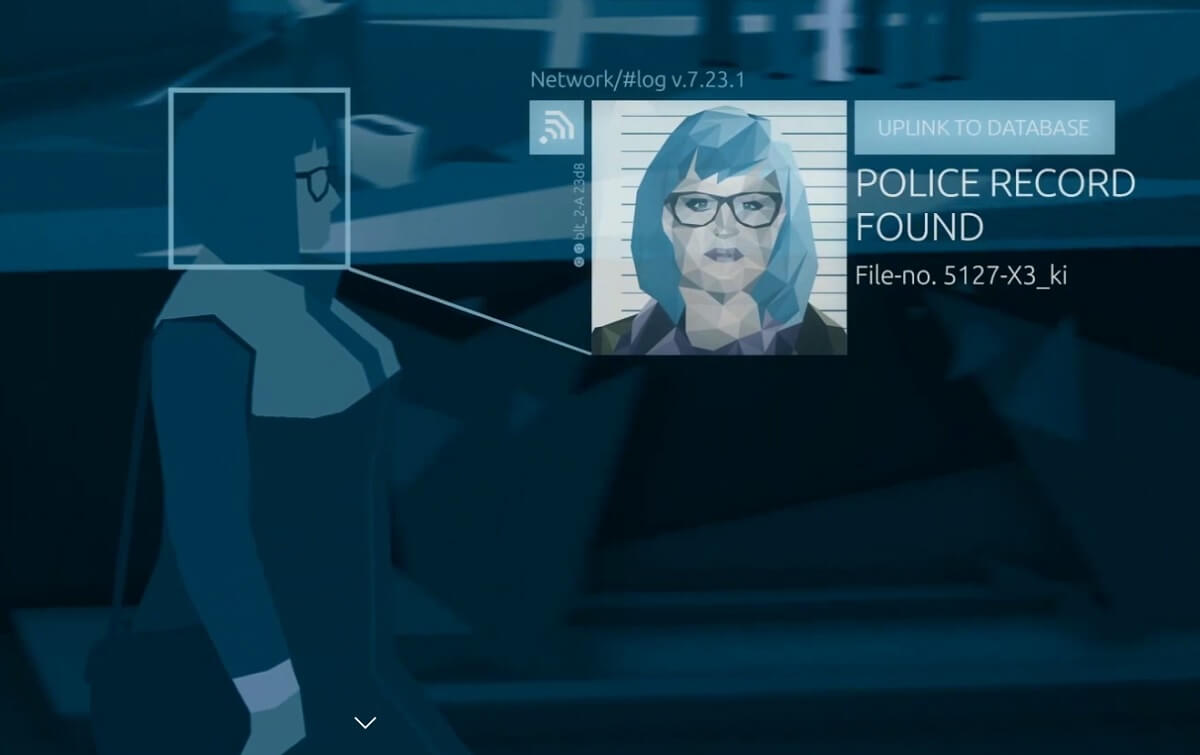 Above: Cameras are everywhere in Orwell and they can help track down suspects.

During the game, you can eavesdrop on conversations in real-time, search through computers, and go through the contents of a mobile phone. Social media posts and dating profiles are particularly useful. Slowly, you build a dossier on each investigated person. Each episode has a title taken from 1984, like “The clocks were striking thirteen” and “Under a spreading chestnut tree.”

As I investigated each person, I got excited when I uncovered something that was potentially incriminating, and then I realized it was really a violation of that person’s privacy and constitutional rights. The music made me feel tense, and I wanted to get to the bottom of the bombings as much as I wanted to see the technology behind Orwell exposed to the public.

Orwell was nominated for a number of awards at the Independent Games Festival at GDC 2017. The game was made by just three people: Taylor, Michael Kluge, and Daniel Marx. Orwell is an amazing accomplishment because it is their first game after getting out of school. It is inspiring other games, as dystopian games have become a whole genre, and hopefully it will inspire some better behavior and in real life.

“I think people should think about what direction they want this to go, and it’s just important to be aware of these things,” Taylor said. “If you are in the role of Big Brother or the NSA agent, you can reflect more upon your role in collecting this data.”

Orwell is available on Steam on the PC for $10. That’s a small price to pay for the awareness it will give you.