Here’s the kind of game Pathfinder: Kingmaker (Owlcat Games, PC) is. It opens with a fairly linear tutorial that lasts about an hour, introducing players to mechanics, characters, and the effects of choices. It’s possible to die during it, sure, but it’s not excessively difficult  Excellent. Then, I get into the main game, fight for a headquarters, and finally have space to quest. A local alchemist has a traditional role-playing game quest for you: Gather some herbs. Look, he’s even marked their location on the map.

So I gather my party and venture forth. There are Giant Spiders in the cave, perfect intro fight for an RPG. It also has something called a “Spider Swarm,” but this doesn’t sound so scary, right? I charge on in, kill the Giant Spiders, and turn your attention to the swarms, and … they kill your characters. Easily, and quickly.

I reload and try again. I maybe cast Bless or some spells to make sure you have the advantage, and hey, that’s interesting. Hitting the swarms doesn’t actually do any damage. It’s all reduced to zero, every time. Maybe you need a mage! So, I wander around, do some story missions, recruit a mage, and start splashing the Spider Swarms with acid … and still nothing. I go up a level or two and recruit a full party, and those fucking spiders still massacre my party every single fucking time.

I go online, maybe Google a solution, maybe ask social media, and discover that the Spider Swarms are vulnerable only to splash damage, which at this point in the game comes only from one alchemist vendor, or, out of nowhere, torches! Awesome, I can do this now! I head back into the cave, and find out that the alchemist’s bombs splash your party, and the torches do a single damn damage point on the rare occasions when they connect — the swarms are still great at killing your characters! Fail again, leave, explore more, gain another level, come back, and finally, barely, with only two of six characters remaining, defeat the damnable Spider Swarms.

And then, victory finally achieved, I go to pick the berries to fulfill your original side quest … and fail the Nature Lore quest, take damage from berry thorns, and die.

The role of the quest

In modern video game RPGs, quests are the way that games explain themselves to the player. They call attention to how the game is meant to be played. A quest to gather herbs in order to brew potions to fight a gryphon in The Witcher 3, for example, tells the player that preparation before difficult fights is an essential part of that game. A quest in Mass Effect to fly across the galaxy and uncover 20 hidden objects of some kind, meanwhile, suggests to players that detailed exploration of its setting will be rewarded by the game.

So what is the player supposed to learn from this very first side quest in Kingmaker? It took me 10 in-game hours, dozens of attempts, and then returning again after leveling up even more in order to pick the berries successfully. I learned that the game was a capricious fucking bastard that would screw me over without providing me the necessary information to find out how I could avoid getting screwed over. I learned that dying and reloading over and over, without understanding why, was the default mode for how Kingmaker worked.

(After I finished the Spider Swarms, I found a loading screen with a tip saying that torches would work against swarms. Whether this was horrible luck on my end, or patched in after presumably 90 percent of forum messages demanded to know how the hell to finish what should be the easiest quest in the game, I do not know.) 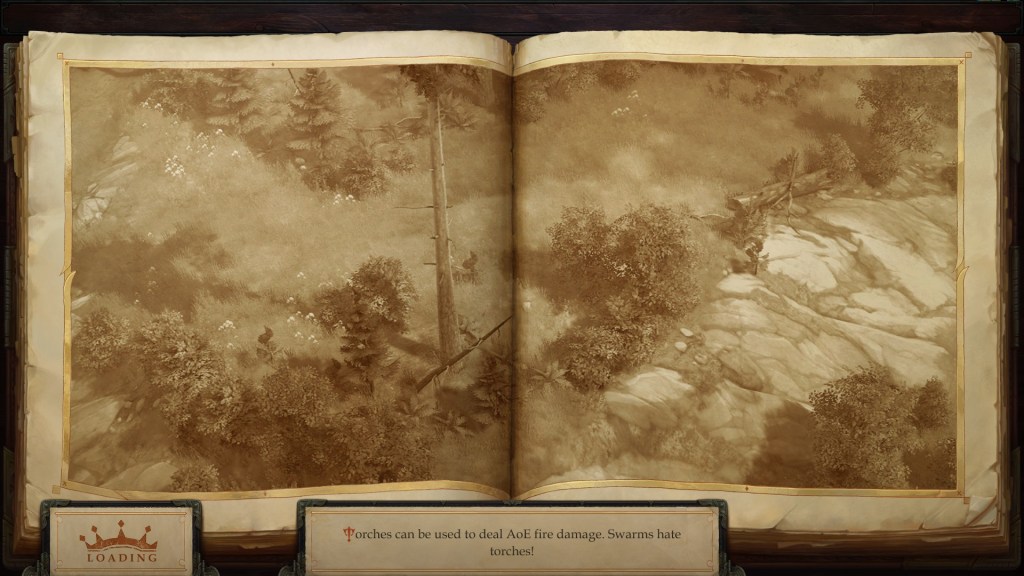 Above: Little late for that, Kingmaker

That lesson has proved valid throughout the rest of the game. Walk into a random screen? There might be a Maneating Troll that slaughters your party. What level should you be to defeat this troll? Not a clue. But at least in that case, you can reload, leave, and come back later. In the case that drove me to shut down the game and write this, long before I could finish the game and do an actual review, I was given a timed quest to visit a certain location with a Dryad commanding a small army of spiders (again!).

This time, the core problem is that she has a seemingly infinite collection of crowd control spells — she casts Hold Person, over and over. My party’s dead at the hands of something called a Doomspider just rampaging over my paralyzed companions. Blowing every consumable I have only seems to make my party last long enough to get her to use a different, equally annoying form of crowd control, Hideous Laughter.

So once again, I get online, and discover something fascinating. Although the core issue in both the Spider Swarm and the Doomspider cases is that the game isn’t providing me with information, it’s a totally different form of information that’s missing in both cases! In the first case, I simply didn’t know the specific form of item that I needed to use. In the second case, it’s that I don’t know what actually stops the Dryad from casting Hold Person, or whether I’m even supposed to be able to fight a Doomspider at my level at all.

My options, according to the internet, are to abuse the terrain to cheese the battle, to load up on archers (which apparently works better), or to reroll entirely and spec my party around winning this fight — with a main character as an archer, and with my characters more able to make Will saves to stop the Hold Person spell.

One option I do not have, of course, is level up and try again later — the quest has a very short timer. And it triggers immediately upon completion of the first chapter of the game. (This is also a great way to ruin a completionist’s day. Or week.)

The core issue with Pathfinder: Kingmaker is something that deeply damages the game at a conceptual level. It’s that this game lacks a Dungeon Master. One major role of the DM in tabletop gaming — and Kingmaker is adapted from a famous tabletop module — is to mitigate issues of lack of player information and excessive difficulty. A DM generally wants to provide players with a challenge they’re capable of overcoming, not to massacre their entire party, over and over, because they don’t know how or why arrows might disrupt the spellcaster more than hitting her with swords and clubs does.

In other words, a DM makes a game sympathetic to its players. Pathfinder: Kingmaker, on the other hand, is a video game that lacks this. It is nothing but predetermined encounters and rigid rules. Instead of being sympathetic, Kingmaker is cold. And cruel.

There is a lot to like about Kingmaker and how it is constructed, particularly in the intersection of kingdom politics, companions, and morality. But the vast majority of my time has been spent inching forward through encounters that I cannot tell if they are supposed to be difficult, impossible with my party and item status, or impossible at my level, then dying, reloading, and trying again. It is infuriating enough that I don’t think I’ll play the game without half a dozen new patches that provide players with necessary information or switching the difficulty to the easiest mode.

UPDATE: I decided to restart, for some ungodly reason, and when I came across the quest again, a new piece of the dialogue had appeared, presumably thanks to patches, that said how to kill the spiders and provided the relevant items. Perhaps playing Kingmaker a week after everyone else will have the worst of it patched out over time. One can only hope. 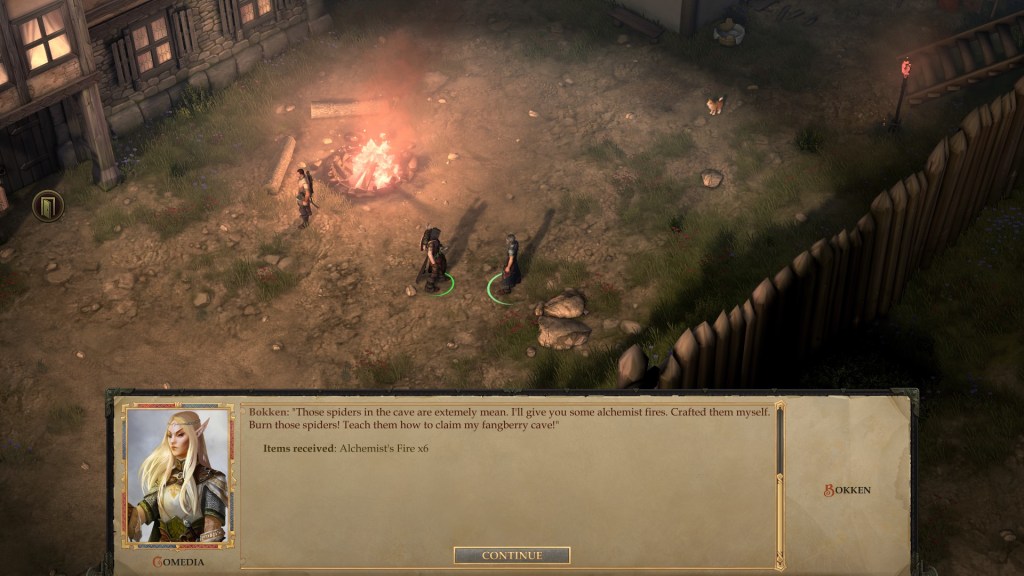 Above: Now that’s how you do a side quest.