The lootbox monetization model is coming under attack. The biggest beefs are coming from players disgruntled about in-game items in Star Wars: Battlefront II. But when it comes to games, this model goes all the way back to Magic: The Gathering (and if we go further in time, we’re looking at good ol’ baseball cards).

Fantasy Flight Interactive’s first game ditches random packs for sets and expansions of specific cards in The Lord of the Rings: Living Card Game, which is coming to Steam’s Early Access program for PC games later this quarter. It’s an adaptation of the Fantasy Flight tabletop company’s card game, which pioneered the narrative experience, ditching the collectible model of Magic: The Gathering, Yu-Gi-Oh, and Pokémon and pitting players against the game itself, not another person.

It’s also one of the most important games announced so far this year. Fantasy Flight is a heavyweight in the tabletop game industry, with partnerships that include The Lord of the Rings, Star Wars, and A Game of Thrones, licensed from George R.R. Martin’s books, not HBO’s smash TV show. According to market research firm The NPD Group, the board game market racked up $1.1 billion from December 2016 to November 2017, up 14 percent from the previous 12-month period. And card games accounted for $206.3 million in that same time span, up 16 percent.

The tabletop renaissance has in turn injected a new category into video games, with card games becoming a billion-dollar business and publishers such as Asmodee Digital bringing more of its brands to PC and mobile platforms and signing up success stories, such as Nomad Games’ adaptation of the Talisman board game (which is based on the Fantasy Flight product). Asmodee will also publish The Lord of the Rings: The Living Card game.

So, what is a living card game? I interviewed Fantasy Flight Interactive community manager Luke Walaszek, and he walked me through how The Lord of the Rings: The Living Card game differs from the likes of Blizzard Entertainment’s Hearthstone (the card game juggernaut for PC and mobile platforms) and Magic: The Gathering.

Taking on the Lord of Mordor 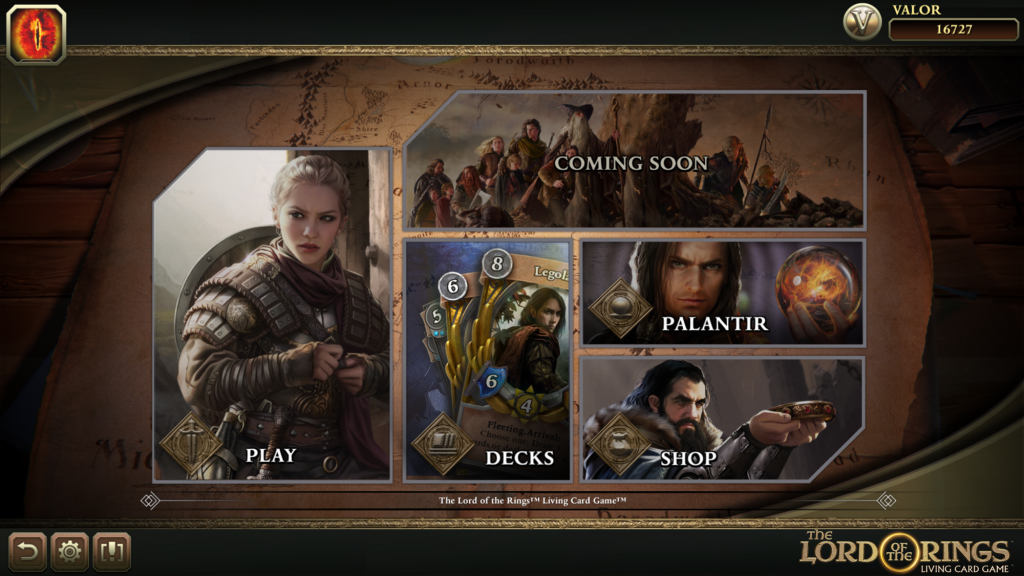 Above: In this game, you want to look into the Palantir.

Fantasy Flight’s coinage of the living card game category “spawned out of the primordial soup that was the CCG boom in America here,” Walaszek said. “Fantasy Flight saw that there was an opportunity for story, narrative driven games that were focused on set purchasing instead of random purchasing. When Fantasy Flight Interactive decided we were going to adapt Fantasy Flight products to digital markets, we said, well, that exists now in the digital world. There are lots of digital card games now. There’s room for that story-driven thing, so let’s move forward with that. That’s how we arrived at The Lord of the Rings: Living Card Game.”

It’s a trademarked term for Fantasy Flight Games. The differences go beyond the business model — as you progress through the story, some cards and effects you play carry through from mission to mission. You buy prebuilt decks of cards, some of which are packaged in expansions. You’ll also be able to buy some purchases with Valor, an in-game currency you earn as rewards for playing. And although you are playing against the AI, you do need an active online connection to play, which differs from other tabletop adaptations.

You control up to three heroes on the playing field — in my demo, we had Aragorn, the leader of the Rangers in the North and the future king of Gondor; Arwen, the daughter of the great elf lord Elrond; and the steadfast Gimli the dwarf. You play through a narrative, one that offers different paths as you take on objectives (to escape Mirkwood, you might follow the path through the forest … or follow the river, similar to the route Bilbo and the dwarves took out of the dark wood in The Hobbit). You go from location to location, carrying not just the power you accumulate but the damage and drawbacks you receive, too, until you win or lose. (This also makes it a “living” game, since the effects of decisions carry on through to the end.)

“The player doesn’t really represent anything themselves in the game. They’re controlling heroes. So playing events, I’m not a wizard casting spells. I’m playing events that help my heroes continue to progress,” Walaszek said, and when I asked if you, the player, are more like a narrative cipher, he came right back with, “Totally, yeah, you could definitely say that.”

You always play the heroes here, as the narrative has you taking on Sauron, stopping the Dark Lord before he accumulates enough power to end the game … or his forces destroy you. In this way, it’s consistent with the narrative of The Lord of the Rings and the spirit of Tolkien’s works. The voice actors aren’t the same as those who played the characters in Peter Jackson’s films, with Walaszek nothing that the studio looked for people whom they felt fit the character, not necessary their movie counterpart.

“It’s all about banding together, cooperating, and fighting a force that’s both otherworldly and possibly insurmountable. The elegance of the design, in my opinion, on the tabletop, is that that’s the story of The Lord of the Rings. That’s represented mechanically. It was super-important to us that we could maintain that,” Walaszek said. “I also think that maintains being a really poignant message. That’s the strength of The Lord of the Rings, to me. It’s all about banding your heroes together and fighting some bigger force.” 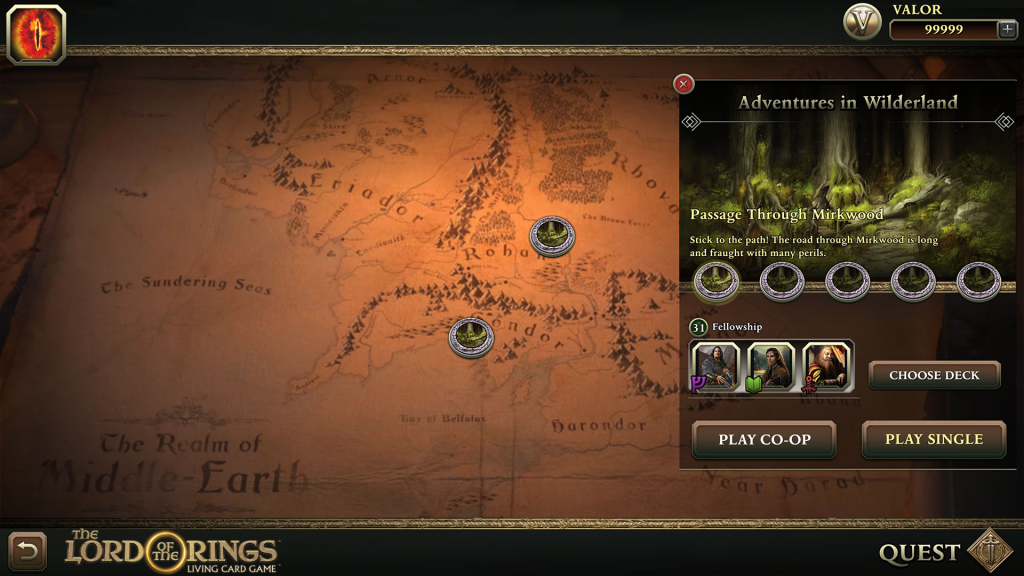 The 30-card decks you make can follow the playstyles from other card games. Colors at the top show which cards belong to one of four spheres. Walaszek showed me what he characterized as a midrange deck (which falls under the purple sphere Leadership, which Aragon epitomizes), one that’s good at several different aspects but doesn’t excel in any and wants to flood the board with minions, like a Paladin in Hearthstone. A green sphere Lore character like Arwen has a control deck that focuses on healing and keeping heroes and minions alive. Frodo is a blue Spirit sphere character with a high Willpower, as it took a lot of internal strength for him to bear the One Ring, and fend off its pull for so long, and these heroes care about completing objectives. Red is for tactics, the sphere of heroes like Gimli.

Frodo stands out. He’s good at stealth, as befits the heir of Bilbo, but he does better when Sauron is weaker, since he’s tied to the One Ring.

Attachments can be either special effects (like a bonus for the Lady’s boon in Lothlórien), armor, or weapons. And this is one of many places in which Walaszek said Fantasy Flight Interactive had to take the design of cards and modify them for digital user interfaces.

“There were three different types of attachments: special, armor, and weapon. You could see that within the deck builder, but you couldn’t within the game. We had these trait boxes already for characters, to say what race they were. We just put them on everything and put those types in there, so people could see that. That was based on community feedback,” he said.

You want to complete your objectives before Sauron gains enough power to pull off his conquest of Middle-earth. A red number on is his threat level, which comes from your cards. Walaszek’s deck started with 30 — Aragon carries a threat of 11, as he’s a major threat in the Dark Lord’s eyes (Frodo would carry a lower number, since he doesn’t see the hobbit as a threat until it’s almost too late). It increases every round as you accomplish your objectives. If the red number reaches 50, it’s game over. So it’s a race to beat Sauron.

Though Walaszek said the Lord of Mordor’s forces end up killing you more often than dinging that 50. Willpower cards can also reduce this threat.

Sauron starts off stronger than your heroes with the opening hand. But Walaszek said as you play attachments and minions, you catch up to his starting board. “When you really start to lose control is around the start of round two, location two, the next location. As you continue to progress, damage persists. That’s when you start to lose pace with Sauron, I would say,” he said.

You fight against a range of evil humans, beasts, and, of course, orcs. 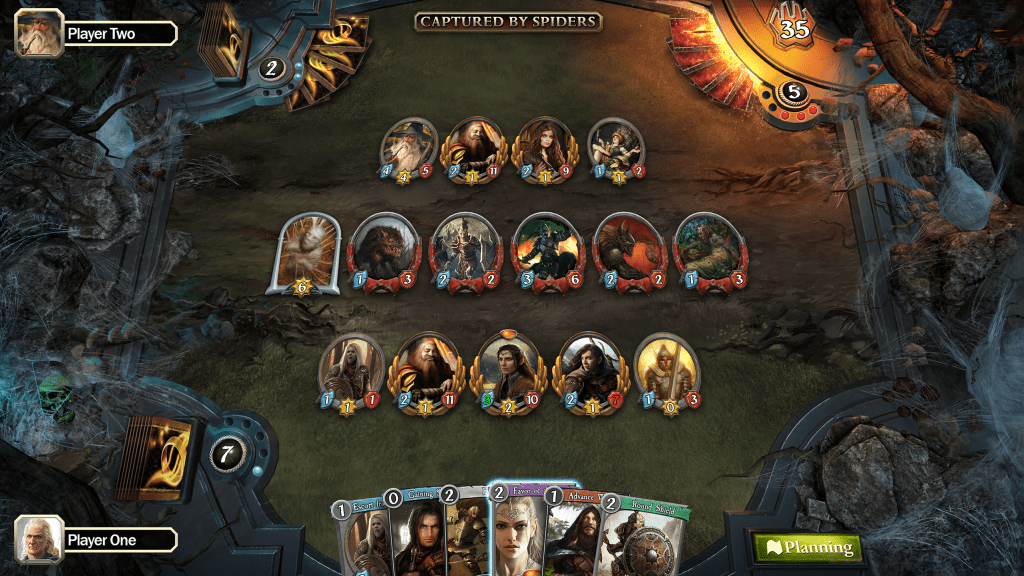 Above: In Mirkwood, you get captured by spiders and must fight your way out. It’s a Middle-earth tradition.

The storyline Walaszek showed off has the heroes carrying a message from King Brand of Dale to Grimbeorn, the descendant of the shapechanger Beorn from The Hobbit. (Fantasy Flight uses characters that might not have appeared in The Lord of the Rings proper but in its appendices and other Tolkien writings). You get lost in the dark wood, as one does, and in the second quest, “Flies and Spiders,” you wake up after being knocked out in the forest, wrapped in the silk prisons of the giant spiders (again, as one does in Mirkwood).

“This one is interesting because you only have one hero at the start. You have to save them by questing toward them,” Walaszek said. Just like when Bilbo saved his friends in The Hobbit, you start with just one hero. This again shows how the living card game’s narrative sticks to the spirit of Tolkien’s works.

We played the third quest, Lost in Mirkwood, which takes place after escaping the giant spiders. You’re lost again. It’s nighttime, and you have to find a way out. The heroes of this preconstructed deck are Aragon, Arwen, and Gimli. You have a mulligan phase, enabling you to tailor your opening hand to taking on the board state and your objectives. Completing one of these two goals sends you traveling to the next part of the storyline. “With these branching paths, because you’re running through the forest, you have to go immediately. You’re trying to escape as fast as possible,” Walaszek said.

Some card traits are similar to those in other games. Sentinel means you must attack those cards over others, like Taunt in Hearthstone. Pursuit is different — if foes with this trait survive, they follow you to the next location. Stalwart means a card isn’t exhausted when it attacks, giving it another chance to act. Pursuit offers an interesting strategic choice — do you let the foe live, not knowing what the next map will bring? Or do you expand resources to kill it?

And because you have one, or maybe more, heroes on the board, you have more flexibility with your mulligans. A bruiser like Gimli can attack, so you can discard a weak minion to look for other cards to give you a better power curve, or go for a low-cost but powerful attachment.

“Attachments are worth far more than they are in other card games. I’m not aggressively mulliganing to make sure I have a one or two cost ally to start the game. I have these heroes that can do something to the board,” Walaszek said.