The following is an excerpt from Chapter 5 of The Secret History of Mac Gaming, “Simulated.”

In 1985, at the suggestion of a neighbor from across the street, professional city planner Bruce Joffe, Will Wright began to expand the program he’d made for creating and editing the background graphics in his popular Commodore 64 helicopter game Raid on Bungeling Bay. This editing program could paint the play area, tile by tile, with water, land, shoreline, roads, buildings, and so forth, and Wright and Joffe had noticed that it was fun just to create cities with it.

Wright read widely on urban planning and computer modeling theories and incorporated these ideas into the simulation he laid on top of the tile editor. In particular he was drawn to the work of MIT professor Jay Forrester, who conceived the theory of system dynamics — which shows how complex systems evolve through multiple interdependent internal feedback loops. “Micropolis”, as he called it, became a city-building and management simulator with power plants, roads, rail, police and fire departments, and three types of zoning: residential, industrial, and commercial.

At some point during development he ran out of memory on the Commodore 64 and switched to the more powerful Macintosh. (Out of pragmatism more than idealism, Mick Foley, his teenage neighbor from the time, explains: “DOS had great market share but bad graphics and no user interface support, while Amiga and Atari ST had no market share.”) Here he continued to improve the underlying simulation, utilizing the Mac’s greater horsepower. More significantly, he reworked the interface.

On Commodore 64, “Micropolis” had been a full-screen game controlled entirely with a keyboard and its palette of tools was laid out at the bottom of the screen. On Mac, it became a windowed application with mouse control, a MacPaint-inspired tool palette and menu system, and a separate window for the mini-map. It was, in essence, an interactive paint program — a MacPaint for city building. As the player painted her city on the canvas, its population would fall and rise and its visual appearance would evolve before her eyes. Its roads would come to life with traffic, its busiest districts patrolled by a helicopter, and its residents would build (or sometimes abandon) homes and businesses. 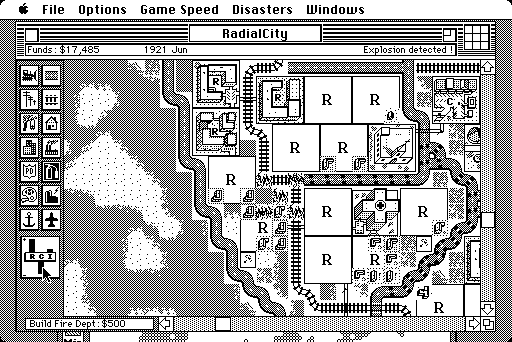 Above: The original black-and-white SimCity for Mac.

Underlying the game was a rough approximation of how cities work. Growth was tied to the attractiveness of different zones, which emerged from both a proximity to and distance from other zones (people don’t like to live too close to industry, but they also don’t like long commutes). It took shortcuts to work around the limitations of the technology. A city might require multiple power plants to meet its power needs, but only one of those plants actually needed to be connected to the power grid. Police and fire stations needed only one tile of road or rail adjacent to them to function. Most processes in the simulation operated on a delay, too — what Chaim Gingold, an expert on the game’s (now publicly available) code, calls a kind of polyrhythm of activity, as the system cycled through different processes to keep the city looking alive and ever-changing.

Few players noticed any of this, however. SimCity, as it was rechristened for release in 1989, captured the public’s imagination like no game ever had. Everybody knew what it was, even if they weren’t into video games. Will Wright became a minor celebrity, hailed as a genius for inventing this new genre of simulation. He and his colleagues at Maxis used it as the foundation for a whole Sim-flavored franchise — SimEarth, SimAnt, SimLife, SimCity 2000 (all developed on a Mac but released across multiple platforms), SimFarm, and many others — that would influence the entire industry.

SimCity made a particularly great impact on Japanese Macintosh enthusiast Yutaka “Yoot” Saito. He felt the Nintendo Entertainment System games he had played before SimCity were more suitable for kids. They had bright, colorful graphics and animation and cute, synthesized sounds, and they tended to be fast-paced. What they lacked in sophistication they made up for in loudness — in frantic button presses and lots of on-screen action. SimCity seemed totally different. It was visually very static, and it wasn’t even displayed in color. 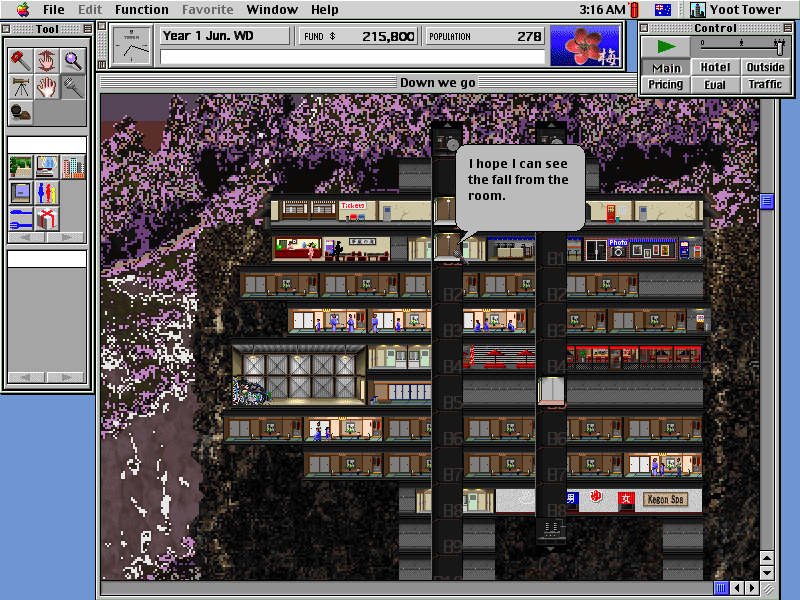 Above: Yoot Tower, the pseudo-sequel to SimTower

But Saito thought it was very smart. In its simple graphics he could imagine many rich and colorful scenes around a city. “I didn’t leave the Macintosh for almost twenty-four hours,” he recalls. “I so much admired who created this genius and crazy software.” SimCity had an aura not unlike the Mac itself. Saito had been attracted to the Mac’s revolutionary air soon after it first came out. Apple’s presence in Japan was tiny at the time, as Japanese computers such as the NEC PC-98 and MSX dominated, but he grew fascinated as he learnt more about the Mac through advertisements and magazine articles. It appealed to him as a charismatic counterculture, a kind of rock ‘n’ roll for his generation. He desperately wanted to be part of it.

But it seemed so far away — almost unreachable. Neither the thriving online Mac shareware scene nor the Apple team and the excitement of all the top developers appearing at the Macworld Expo were at all accessible. Japan had a few Mac-centric magazines and a small (but growing) Macworld Expo in Tokyo, but with limited online access it was very much detached from the happenings elsewhere in the Macintosh world.

In homage to SimCity’s brilliance, Saito decided to make his own simulation game for the Mac. Rather than asking the player to plan and manage a city, he opted for a single skyscraper.

With an interface similar to SimCity, The Tower swapped residential blocks for condominiums and hotel suites; commercial zones for offices, restaurants, and shops; and industry for parking, medical centers, housekeeping and laundry facilities, recycling facilities, and the like. In place of roads and rail, it had stairs, escalators, and elevators. The goal was to build a hundred-floor tower with a five-star rating. To get there, the player divided her time between expanding the tower, managing elevator traffic and capacity, monitoring the happiness of tenants (their silhouettes turned increasingly red as their happiness decreased), and handling business affairs such as number of staff and cost of a room, office, or condo.

The Tower took around three years to develop. It came out for Mac in Japan in 1994. “It became a kind of phenomenon,” Saito says. “I was introduced on a TV show and in some magazines.” He also received multiple offers to adapt the game for the console market. A short time later Saito heard from Jeff Braun, the president of SimCity publisher Maxis, who had been informed by Will Wright that his game was “interesting”. Maxis cut a deal for international publishing rights and re-released it as SimTower. Its international success didn’t match the celebrity scale of the Japanese release, but SimTower nonetheless became a bestseller and cult favorite.

Saito’s studio OPeNBooK became OPeNBooK9003 in 1996 when it merged with 9003 Inc., which had developed a popular Mac-only interactive screensaver called Aquazone. This turned the computer screen into a virtual fish tank. The fish would start tiny and grow and change as the user fed them. At the core of the screensaver lay a realistic simulation of fish life cycles and underwater dynamics. (Side note: screensavers were big business on the Mac. Berkeley Systems” After Dark suite in particular, best known for the Flying Toasters screensaver, routinely topped software sales charts, and it even included a few screensaver games such as Ben Haller’s popular Lunatic Fringe — an Asteroids-style space combat game — in some versions.) 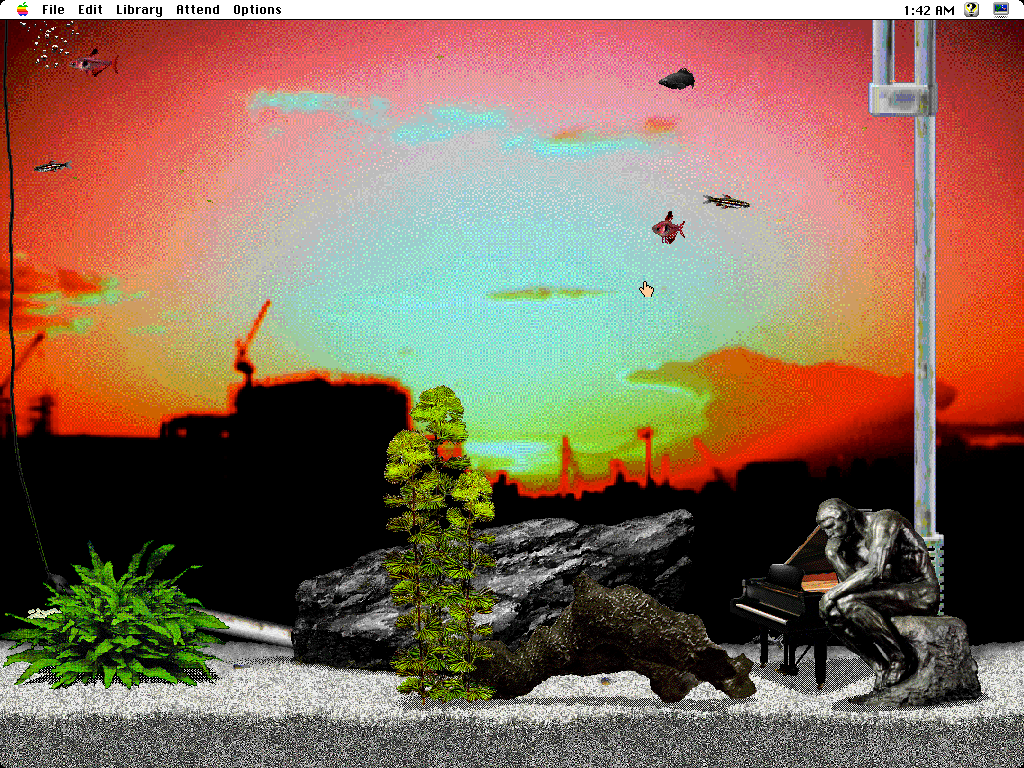 Above: Aquazone, an interactive screensaver that bridged the gap between SimTower and Seaman

One day at lunchtime, while The Tower and Aquazone teams were each developing sequels, Saito commented to a few of the younger developers that he thought it was ridiculous for the nearly twenty-strong Aquazone team to be spending so much money and time on research of real fish. Aquazone was software for a general audience. It didn’t need to be so realistic.

“I said I would do something different like a talking fish watching the users from the water tank and asking what kind of activity they’d undertaken or the name of the girl he brought in last night or something like that,” Saito recalls. It would recast the fish as observer. It would watch and listen to the user, not the other way around.

“And I would name that software like ‘Seaman’ because it’s a human version of a sea-monkey.”

Unable to forget the idea, a few weeks later he started to sketch out what that human/sea-monkey hybrid pet might look like. Around eighteen months later, after development finished on The Tower II (released internationally as Yoot Tower), Saito moved to Berkeley, California, to start prototyping his “Seaman” idea.

He hired a few people to work with him in Berkeley. They didn’t gel well, or progress particularly fast, because Saito was uncomfortable as a manager and had to constantly fly back and forth between Japan and the United States. But after a while they had a working prototype of Seaman. Then the vice president of Sega, Shoichiro Irimajiri, called and invited Saito to have sushi dinner. “I agreed and went to downtown San Francisco with my Macintosh laptop to show him this prototype,” Saito recalls.

“One thing this prototype obviously had was that it looked very weird. It didn’t have a speech recognition [yet], but it did speak — with my voice, because it’s a prototype.”

Irimajiri’s reaction was passionate, to say the least. He yelled, “That’s horrible! Horrible!” Saito took it as a sign that Seaman could be a commercial success. At Irimajiri’s suggestion, he shifted development to Sega’s upcoming game console, the Dreamcast. It subsequently became one of the Dreamcast’s strangest, most beloved games and received a Japan-only PlayStation 2 sequel in 2007. Saito would continue to be a staunch supporter of Apple, but he has yet to develop another game for the Mac.

Richard Moss is an award-winning writer and journalist based in Melbourne, Australia. His first book, The Secret History of Mac Gaming, is out now.