Total War: Three Kingdoms doesn’t look like a huge change for the Total War series, but it might unintentionally be the most radical installment the series has ever had, in ways both exciting and annoying.

Creative Assembly’s Total War series is nearly 20 years old, roughly a dozen games in, and it’s always had strong formula. First, have a solid, if possibly unexciting, strategic campaign mode that serves as a backbone, a foundation. It’s gotta be good enough to not make the player lose motivation, but it’s not the primary reason that people play. Second, have a best-in-class real-time tactical combat component. The big differentiating reason to play Total War, from Shogun to Warhammer, has always been its battles — epic slugfests over bridges, brilliant cavalry charges to turn defeat into victory, or skillful use of terrain to force overwhelming enemies into Pyrrhic victories that win wars even if they lose battles.

This is a normal division. In most games that have a strategic-tactical component, like XCOM or even sports sims, the tactical component takes priority because it’s more exciting and immediate. In those 20 years of Total War, every single installment has had a strategic layer overshadowed by a tactical layer. Most of the time, that’s a solid grand strategy map with a great battle system, although there are odd exceptions like Rome 2, with a dull map and disastrously bad combat.

So my experience with the first 30 turns of Total War: Three Kingdoms was surprising in that … for the first time, I thought that here, here was a Total War where the strategic layer was so superior to the tactical layer that it might be worth playing without the battles.

Since the battles are usually the more important half, let’s start with them, and why I’m skeptical.

The Total War series has almost always struggled with getting the balance of combat right. It needs to be tactical, where the player feels like their decisions matter but they’re not overwhelmed with choice in real time. But it also needs to be snappy, as a campaign will have dozens if not hundreds of battles, so excess fighting turns into a slog. But more importantly, they have to be satisfying, where the tactical decisions you make throughout continue to feel important, instead of just busywork — especially busywork that takes far too long. The sweet spot tends to be fights that last 5 minutes to a quarter of an hour.

The latter has been an issue with Total War games, especially in recent years. The disastrous Rome 2 turned fights into rugby scrums, with little resembling formations or pacing. Total Warhammer improved matters, especially with higher-level armies, but far too many of its early-game battles (especially with the Old World factions) ended up with several minutes of infantry slowly chasing down cheap archer units. When it worked, it was fantastic, but it could sometimes take a little too long in a campaign to get there.

Unfortunately, in my preview event, the battles were far, far, far too likely to turn into interminable slogs for me to get excited about the tactical side of Total War: Three Kingdoms. Toward the end of my preview, I, with an army led by Zhang Fei and with some generic sidekicks, faced a perfectly average, evenly matched, midsized fight against the local Yellow Turbans. A few minutes into the battle, roughly halfway though my fight (or so I thought), the press in the preview room got told that the time was up, and to get ready to clear the room for the next batch of people. 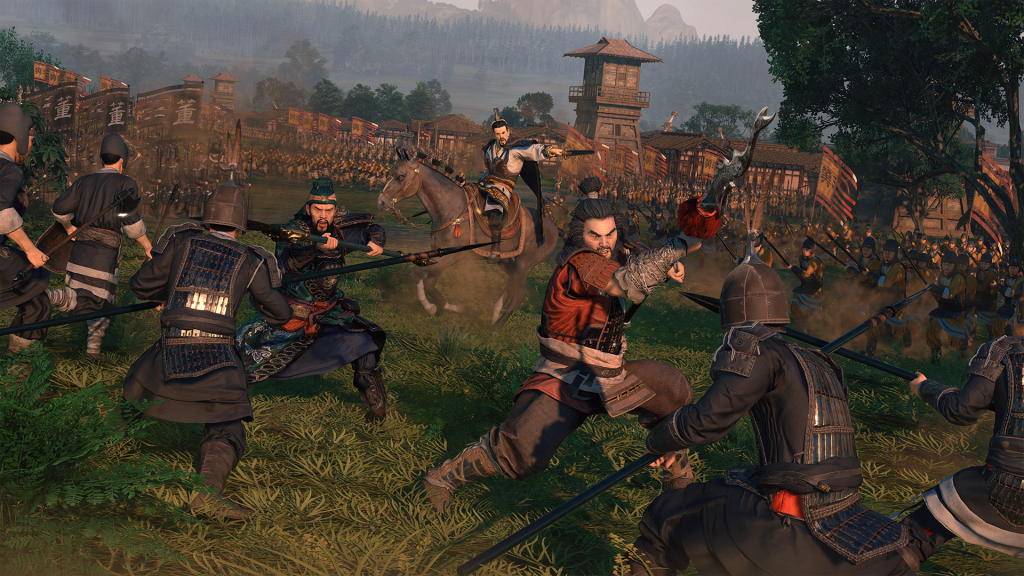 Then the battle kept going. And going. Units were scattered across the map, routing and reforming and routing again. Almost all the generals were defeated, except for Zhang Fei, who was 90 percent dead yet no enemy could actually seem to stop him. So I just had him ride from enemy unit to enemy unit, slowly routing them. A good 15-20 minutes later, with the room emptying and no end to the battle in sight, I just quit. It was exactly what I didn’t want out of Total War tactics.

A few major changes for Three Kingdoms seemed to exacerbate all of Total War combat’s bad habits. First, the maps have been enlarged, to give more of an epic feeling to the fights. While certainly gorgeous, this also meant much more room for units to rout, and then others to give chase. Second, in order to match the increased size of the map, archers now have increased range. This also makes them harder to pin down, as they run away. Finally, the hero units just felt mega-powerful, to the point where if I had one, I felt like there was always a chance, even if it took forever.

While this particular experience was disappointing, there were a few potential mitigating factors that perhaps made this preview a poor way to judge the entire game’s tactical combat. First, one of my major problems was that hero units were overpowered and wouldn’t rout to end combat — conversations with developers suggested that would be patched by release.

Second, the entire game will have an option at the start of each campaign to play in “Romance” or “Records” mode, with Romance being having the generals behave like superheroic Dynasty Warriors characters, and Records have them as regular cavalry units like generals behaved in previous historical Total War games. This preview only had Romance mode available, and it’s possible that what I think makes for a good Total War battle will be far easier to achieve in the perhaps more-balanced Records.

Finally, the specific faction we were playing as in the preview might have been a partial cause here. I played as Liu Bei, the usual hero of Three Kingdoms stories, and his power in Total War is that he helps “the people” and the people help him — in this case by making the super-cheap peasant units have very little upkeep and thus very easy to fill up armies with. Much like early Total Warhammer fights, it’s quite possible that filling an army with trash units makes battles turn into trash — and that playing as other factions, or getting into the late game, would see these problems resolved.

On the other hand, just about everything I saw and discussed with the developers surrounding the strategic layer of Total War: Three Kingdoms suggested to me that this might be the best Total War game yet, and perhaps the best Three Kingdoms video game I’ve played.

The essential and necessary design decision that makes Three Kingdoms stand out is that it is much, much more character-focused than any previous Total War. This aligns with the source material, both historically and in fiction, where the characters and their relationships define this period of Chinese history far more than simple the clashes of nations and armies.

As such, every character in the game can be recruited to any other faction (although faction leaders have to be defeated). There are also dozens of unique characters with their own unit models and voiceover and skill trees, who should be familiar to people who love the era. In order to build a system where this feels like a living, evolving system, Three Kingdoms has added character relationships, giving it a slight Crusader Kings 2 feel where each character can have opinions — and possibly act on those opinions — about any other character they happen to work with or fight against.

The peak of that concept is the game’s spy system, where players can designate officers to become spies, who jump into the recruitable officer pool, and can later flip armies or cities if another faction recruits them into leadership positions. This adds an element of danger to recruiting star characters — if you see a hero like Ma Chao or a genius strategist like Guo Jia, who’s to say they’re not spies sent to trap you?

Unfortunately, with only 30 turns to play, I only got to see the foundation for these systems being laid, and not actually the systems themselves. Whether, over the course of the campaign, betrayals and friendships and rivalries actually dramatically affect the course of the story will probably only be seen upon the game’s full release in May. I do have confidence that the system should be entertaining — or at least close enough to entertaining that patches, expansions, or mods can get it into shape.

A bunch of other aspects of the strategic mode made me excited. The map of China itself is gorgeous and massive, in the way that any fan of the setting should find appealing. Each major faction has a different playstyle. Liu Bei, in addition to the peasant recruitment, also has the ability to easily convert imperial cities to his own, without having to fight for them. This altered my playstyle so significantly that if the other factions do this that well, it should make most new campaigns feel fresh. 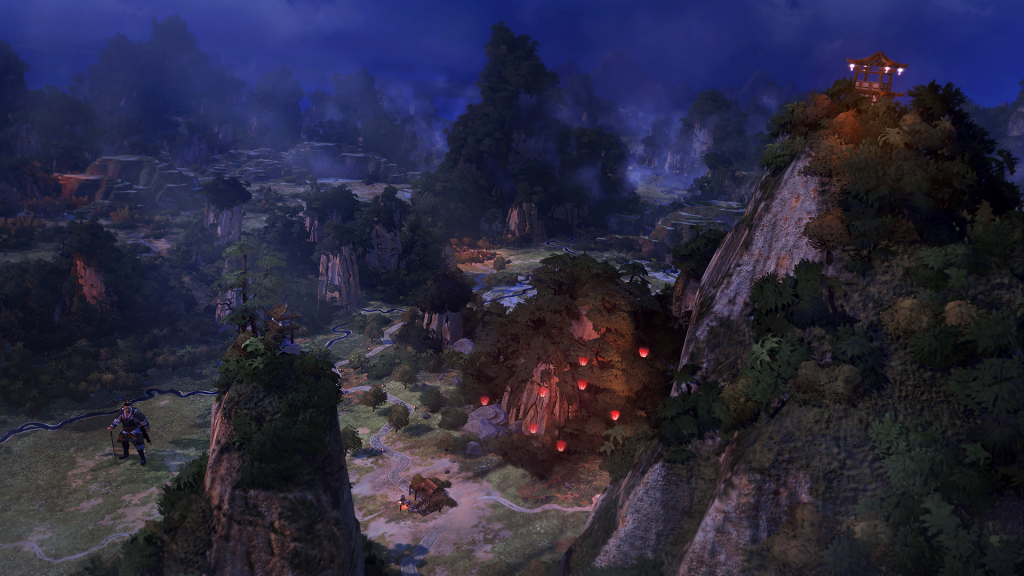 Above: The Three Kingdoms: Total War campaign map at night

Each playable faction also gets decision events that can guide them down a historical path or start down a different path. As Liu Bei, the early event I got was that Cao Cao was preparing to attack my friend Tao Qian, and should I take the historical path and confront Cao Cao, or let him through and change history? The former course had Liu Bei wander across China from his base of power in the northeast to the kingdom of Shu in the southwest — but there’s no telling how the systems would reset if history got that change.

It’s rare to go to a game preview event for a few hours and come away with such strong conflicting opinions. For every aspect of the strategic mode that I was excited about, I had an equivalent fear that the tactical mode would be a disaster.

Much like the history of the Three Kingdoms itself, there’s a series of “what if?” questions that should determine how the story of Total War: Three Kingdoms goes. If the tactical engine is improved from my specific negative experience in just about any way, this should be a solid Total War installment. And if the strategic mode comes anywhere near fulfilling its promise? This could be the best Total War game yet. If.