Twitch is still the primary destination for live gaming video for most people. But the company is no longer laser-focused on just games. And that’s good because it is seeing more growth outside of those traditional categories, according to data-tracking firm SullyGnome and broadcasting services provider StreamElements. The “Just Chatting” category on Twitch has grown consistently throughout the last 12 months.

This is indicative of a platform that is expanding beyond its core audience.

“One of the most interesting developments on Twitch is the growth of non-gaming content, particularly the ‘Just Chatting’ category,” StreamElements chief executive Donor Nir said. “While viewership of every top game has fluctuated, ‘Just Chatting’ is the only category to consistently maintain its upward momentum. It grew 36% since its launch a year ago which is four times as much as Twitch’s overall growth rate in that period.”

Above: Just Chatting is where the growth is at for Twitch.

While the typical Twitch streamer is probably still someone broadcasting gameplay, that could change. Twitch is great at enabling all kinds of people to reach an audience. And many viewers show up for the broadcaster and not whatever game they are playing.

“This is significant because it shows where Twitch is heading, “said Nir. “[And it] opens the door to more non-endemic brands given that influencers who use the Just Chatting category are more conversational and provide more opportunities not tethered to game play.”

While Just Chatting is growing on Twitch, Fortnite needs a boost

Twitch viewership is not a great metric for assessing how a game is performing. One or two big streamers can have an outsized influence on the number of hours watched for any one game. That said, it’s still clear that Fortnite is on the decline. Its hours watched dropped 20% quarter-over-quarter, according to SullyGnome and StreamElements.

Fortnite is still the top game on Twitch, but it has seen declines in total hours watched throughout 2019. It has also seen a decline in the number of Fortnite streamers. 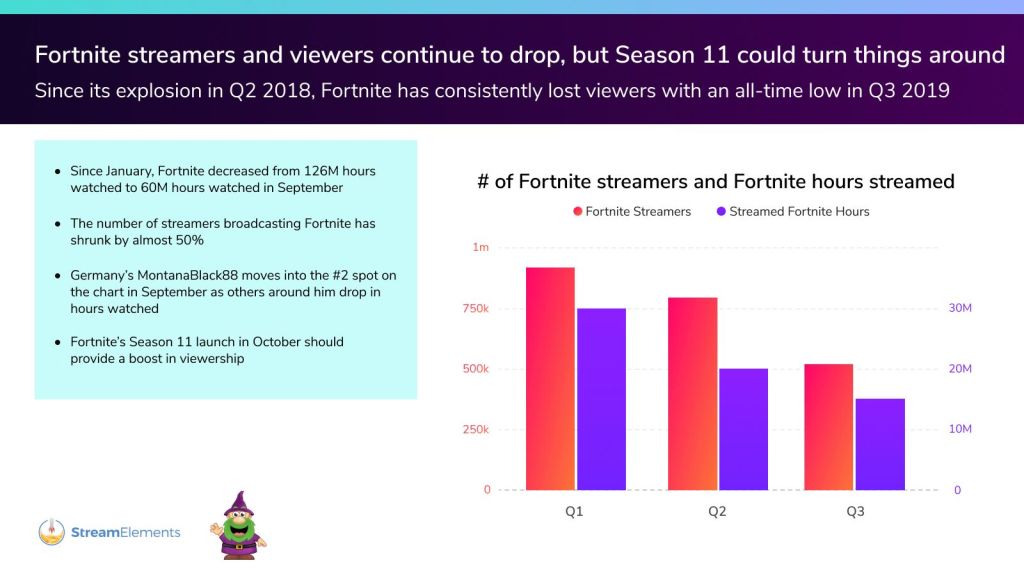 Above: Fortnite is on the decline.

But while Fortnite’s strength on Twitch is at a low point, that’s likely not going to last. Developer Epic Games is preparing to launch a new map for the game as part of Fortnite Chapter 2. That event is already drawing attention thanks to an in-game blackhole that has sucked up the original map and is preventing players from logging in to play.

Hundreds of thousands of people are watching livestreams of the blackhole on Twitch right now, and that momentum should carry over whenever Chapter 2 finally debuts.