The urine was the beginning of the end.

One of my asteroid’s dupes, Frankie, went to go use the outhouse, but it was clogged. While he attempted to unclog it, well, nature called a little hard, and he made a mess all over the floor. Unfortunately, I’d placed the outhouse on the same level as several of my beds, so everyone waking up suddenly found themselves walking through the unpleasant substance.

Things were already pretty stressful on the asteroid we’d named Abode, but this was the last straw for many. The breaking point for Catalina and Otto triggered their stress reactions: vomiting. Just constant repeated vomiting, combining with the urine to cover pretty much every floor of Abode with polluted water. They couldn’t mop fast enough to clean it, and the stress reactions caused everything else to collapse. No new rooms were built, the nutritional paste machine went unmanned, water wasn’t delivered to the oxygen-generating algae mounds, and the entire colony slowly starved and choked to death in a hellhole of piss and puke. 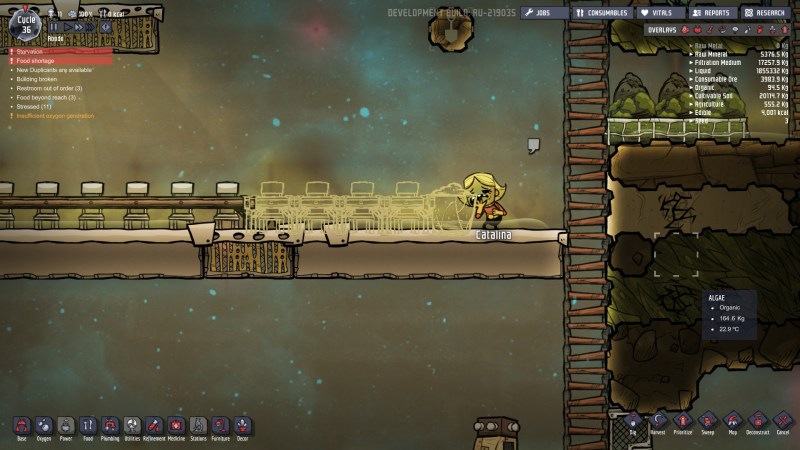 Above: Catalina is nauseated by having to walk through floors covered in the “polluted water” that she made.

This is the world of Klei’s newest Early Access game, Oxygen Not Included. It’s a survival strategy game, like Dwarf Fortress or RimWorld, where control a small colony of people trying to make it in an incredibly dangerous world. They’re like mixes of city-builders and roguelikes, where you create increasingly complex systems whose inevitable collapses are intense and hilarious.

Oxygen Not Included is still in early access, and it’s nowhere near complete yet. But it’s off to an entertaining start, and it has some pretty important distinctions from similar games.

The biggest one is that it’s got a strong sense of style. At a glance, the side-scrolling, 2-D rooms hollowed out of an asteroid look a lot like Fallout: Shelter, and describing Oxygen as “Like if Fallout: Shelter was a real game instead of an exploitative monetization system!” would make a solid box quote. Given that Dwarf Fortress is played in ASCII, this is a major step forward for the burgeoning sub-genre.

This attractiveness and the seeming straightforwardness of the interface may make it look like Oxygen Not Included is the more accessible form of survival strategy, but that claim may be a little more difficult to make than first glance could indicate. That’s because of the other thing that sets Oxygen apart from its peers: it’s a single system.

A game like RimWorld, for example, is a collection of interlocking systems, like food production, construction, animal taming, corpse disposal, and so on. At various points in that game, you can expand into a new system, and if a character dies, you can shut down that production. It’s an open set of systems. But Oxygen Not Included, taking place inside a single asteroid, is closed. You have only so much water, only so much air, only so much room to expand. The goal, right now, is to be become sustainable before you run out of any of those things.

This has a few key effects on the game, and they aren’t all positive. First, the closed system means that Oxygen Not Included isn’t initially as difficult as its peers: it’s about making sure everything in the asteroid goes well (or doesn’t) for everyone, instead of the random disasters that can ruin individual systems in other survival strategy games. So you can play for a few hours, and figure out how everything works without expecting to have a stray gunshot kill your only cook as in RimWorld. 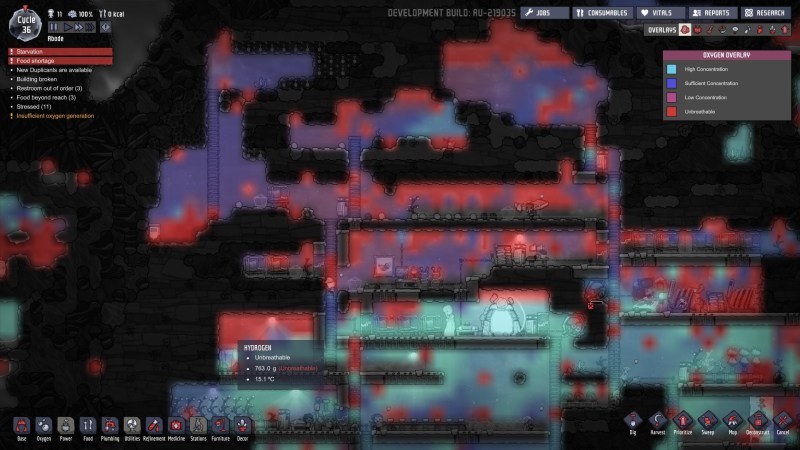 The closed system can be a bigger issue, however: when something goes wrong it starts to go wrong for everyone, which can make it tougher to recover from disasters. To take my Abode example from the top of the piece, the core problem wasn’t the piss. It was actually the steady decline of oxygen quality throughout my colony, from setting up electrolyzers that separate water into oxygen and hydrogen (creating way too much hydrogen) and coal generators, which polluted my oxygen. The wild inconsistency of the air was stressing all of my dupes out, so it only took one final pee-straw to send them over the edge.

Had I understood how gasses worked, I could have realized there were things I could have done to remedy this. The physics of this game are neat: hydrogen rises, carbon dioxide falls, and oxygen remains in-between. So I could have dug out and built my base so that the hydrogen all rose to one place, built a gas pump there, had the H sent to a hydrogen-based power generator, and turned that into clean air. These solutions grow ever more complex, with polluted water and various gasses requiring different pumps, pipes, and filtration devices.

Much of the time spent on Oxygen Not Included therefore gets spent on creating increasingly complicated channels for the gas and water you need to survive. This means pausing the game, connecting input and output pipes to the right places, making sure there’s air and water pressure to get the job, and so on. It’s all one system, and that system grows increasingly baroque depending on if your lavatory is located above your fresh water source or your polluted water dumping ground. 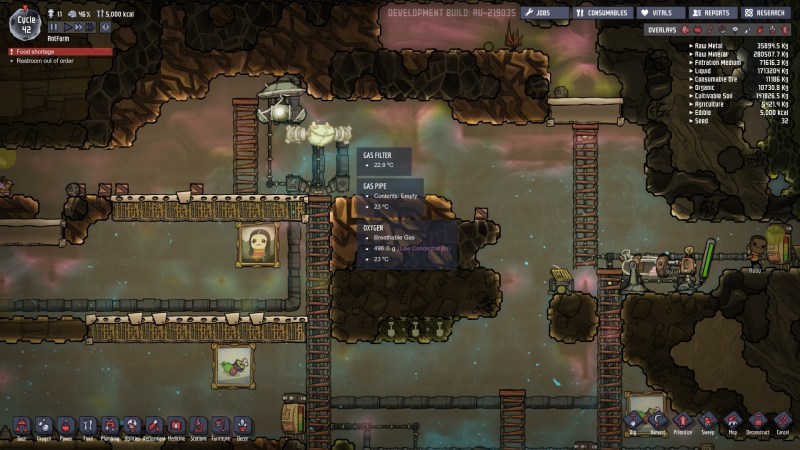 This leads to the final aspect of Oxygen Not Included that separates it from its peers: it feels like a solvable game right now. Once you’ve researched the best filtration devices and power generators, then polluted water gets filtered into clean water, used in showers, and around again; hydrogen is filtered from oxygen, the oxygen pushes the hydrogen up, the power keeps everything going.

That’s probably an Early Access issue: get the systems working before creating the things that’ll mess them up. That’s the key thing Oxygen Not Included should add to realize its potential: chaos. Right now the game operates a little too calmly, occasionally stress vomiters aside. It seems some more irresistible pressures, either externally via random events, or perhaps internally by giving characters more personalities and potentials for conflict.

Until then? Oxygen Not Included is one of the most promising new survival strategy games in a while, but its promise is still a little bit out of reach at the moment.