Activision is kicking off its Call of Duty XP fan event in Los Angeles with a keynote speech at 10 am Pacific time.

You can watch it here. Eric Hirshberg, CEO of Activision Publishing, promises a bunch of reveals for Call of Duty: Infinite Warfare, Zombies in Spaceland, and Call of Duty: Modern Warfare Remastered (which got the biggest applause). I’ve played these games, and my posts will be available soon.

Twitch plays Nuketown will allow everyone watching the stream control a paintball cannon at the event. Starting October 14, you can play the Infinite Warfare multiplayer beta. Hirshberg also announced that Activision’s Infinity Ward studio will remaster all 16 original multiplayer maps for Modern Warfare Remastered. (That also got a lot of applause).

Dave Stohl, head of Infinity Ward, described changes to multiplayer, including the addition of combat rigs, which let you customize your play styles. There’s also a lot of new weapons and perks that you’ll have to choose from using the Pick 10 system. There’s a crafting path for prototype weapons. You can play roles such as the Warfighter, Stryker, Merc, FTL, and a couple of other combat rigs. The FTL rig lets you slide and shoot at the same time.

There’s a fluid map design uses the same wall-running and momentum-based movement system introduced with Treyarch’s Call of Duty: Black Ops III last year. You can get a tactical nuke after a 25-kill streak. With customization such as gun perks, there are hundreds of variations of weapons. You can get sci-fi weapons like the exploding knife, the Biospike, and the spider-like walking grenade.

With new Scorestreaks, you can do things like use Thor, a hovering missile platform that rains missiles. You could also call in an RC-8 robot to lay waste to lots of opponents with withering fire. There’s new modes such as Defender, where you have to keep a ball away from the enemy. It’s a game of “keep away.”

There’s a playable Zombies in Spaceland at the XP event. Raven Studios did a lot of the work on Modern Warfare Remastered.

Mark Lamia of Treyarch announced the Salvation DLC for Call of Duty: Black Ops III. He also showed a launch trailer for the Salvation DLC, with new maps like Citadel (a castle), Rupture, and Micro.

At XP, the Infinite Warfare single-player campaign got some love, with details on ship assaults, space dogfights, fighting in zero gravity, and interacting with the crew of your big ship. There’s a new 7-minute demo of the campaign out now. The production values on the cinematic look pretty amazing, and it shows a wide variety of gameplay with mechs, space ships, and the usual ground combat. 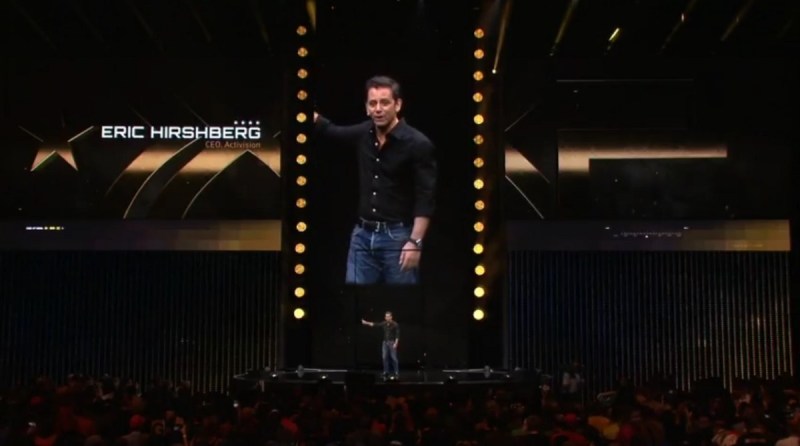 Above: Eric Hirshberg, CEO of Activision Publishing, at Call of Duty XP 2016.