From the very start, you can tell something is wrong in Where the Goats Are. A sense of impending doom hangs suspended in the air as you click around, completing chores on a peaceful farm. It’s a slow contemplative game that’s out today for PC and Mac on the indie platform itch.io.

When I played an earlier build, I first noticed how cumbersome it was to move around as Tikvah. I’d get frustrated with her, and then feel guilty. Tikvah, unlike most video game protagonists, is a stubborn old woman who’s stayed on her farm as her neighbors and family all moved away one by one.

“I really like the idea of an elderly, non-athletic protagonist, because frankly, you just don’t see it that often in video games,” said developer Coyan Cardenas in an email to GamesBeat. “I think the reason for this is that most ‘mainstream’ games are trying (and succeeding) to appeal to players’ escapist fantasies, and who fantasises about being a lonely farmer past her prime?”

Cardenas, who goes by the handle Memory of God, says that his inspirations include conversations he had with his girlfriend about escaping to the English countryside, setting up a goat farm, and making cheese. He also saw a documentary about an old woman who lived alone after everyone else left. These two coalesced to form much of Where the Goats Are’s premise. 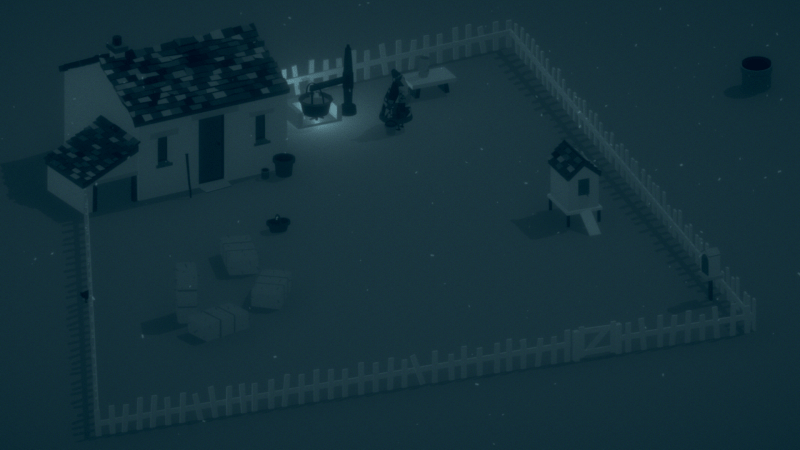 The days pass quickly, or maybe Tikvah just moves slowly, and you won’t find any hard goals. You can milk your goats, collect eggs from the chicken coop, make goat cheese, water your plants, and play with a stick.

“Mechanically, it was driven by a desire to create a non-action, non objective-oriented narrative game, which told a small, personal story,” said Cardenas, “probably due to the fact that sometimes it feels like every video game I see nowadays has shooting or fighting in it, and honestly a game where you just look after goats seemed refreshing.”

It’s a lonely existence. The only human contact you have is a man who comes by to offer trade and deliver letters from your far-off relatives. These snippets begin forming the story as you learn what’s happening elsewhere in the world, away from your little plot of land. Other than that, you can choose how to spend your day.

“The interesting part, and the part unique to video games, is this narrative is not prescribed or ‘written’ into the game, it is created when the player actively engages with the game,” said Cardenas.

In Where the Goats Are, players can choose how to use their time — whether it’s amassing wealth in the form of cheese, watering plants, or simply goofing off. Cardenas says that you don’t even have to leave the house in the morning; you can choose to sleep the day away if you wish. The game doesn’t punish you for your decisions. Instead, there’s the sense that the outside world marches on.

“One thing I’m very interested in exploring is ‘optional interactions’, in that the typical player is so conditioned by the positive feedback loop that they become unwilling to interact or carry out an action if they receive no explicit and immediate reward for doing so,” said Cardenas. “This game was an attempt to completely dissolve that, to have no real objectives and no real rewards, to fill the game with interactions that do nothing or have no clear effect, in the hopes that in place of that can be a real empathy and emotional alignment with the avatar, and acting with agency within a world becomes its own reason for doing something. ” 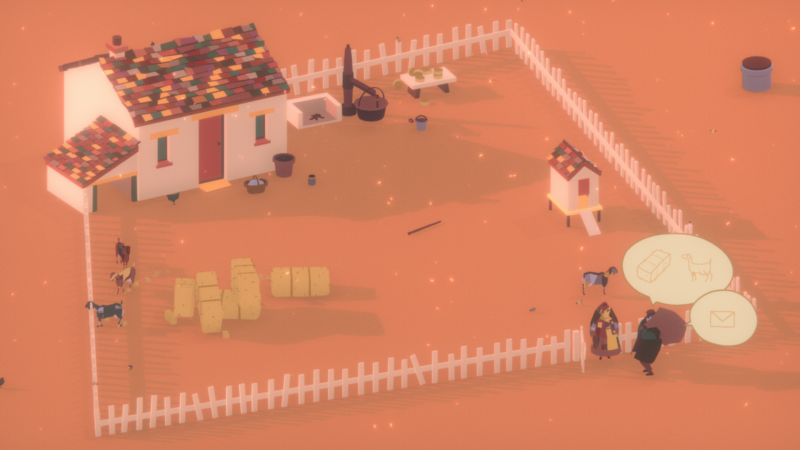 Without spoiling anything, you eventually read that all is not well beyond the farm. Several family members offer well wishes to Tikvah, saying they hope that she’s staying safe and avoiding the disasters that are befalling the cities. Even knowing this, though, you can’t leave and go find them. What follows is a kind of helpless acceptance.

Jack Taylor‘s soundtrack sets the tone. It’s expansive, featuring sustained tones that echo dreamily. There’s a meditative yet slightly eerie feel to it. The tracks weren’t created specifically for the game; Cardenas found them on Reddit, where Taylor had posted them for free, and knew that he wanted to use them.

“If I remember correctly I believe I had the music in the game before you could even move the main character, so I think I crafted the game around the music to some extent, to the point where I now couldn’t imagine the game existing with any other music,” said Cardenas. “I am super lucky to have found it, and for Jack’s generosity.”

This is Cardenas’ second game. His background is in art, painting, and architecture — all of which can be felt in the way Where the Goats Are seems to unfold like a tableau. There’s no clock to tell you the time. Instead, the quality of light changes, becoming a rich deep gold as sunset approaches. While everything falls apart, your whole world is your yard and your goats, a peaceful but melancholic way of life.