Ubisoft is going to screw up Far Cry 5 — at least as far as my expectations are concerned. But it can only fail because it has made some fascinating and smart choices about where to set the next game in this open-world shooter series.

Unlike the previous Far Cry games, which have repeatedly had players traveling to remote regions of the globe to kill well-armed locals, Far Cry 5 will take you to Montana. The publisher has all but confirmed that state is the setting in a handful of teaser videos, and it is planning a full unveiling on Friday. Earlier today, Ubisoft also revealed what looks like the villainous, well-armed locals that you’ll have to kill indiscriminately in the latest Far Cry, and they have all the trappings of a separatist cult.

The teaser image is a reference to da Vinci’s The Last Supper. A man, with other people and guns surrounding him on both sides, hovers over an open book set atop an American flag. Instead of stars on this flag, this one features several cross emblems — the same emblem that hangs on a black banner and flag outside the groups church and above the U.S. flag.

Ubisoft must be attempting to conjure up the memory of American extremist groups like the Branch Davidians in Waco, Texas, the Fundamentalist Church of Jesus Christ of Latter-Day Saints in Utah, and the Michigan Militia.

Of course, Far Cry 5’s cult may most end up resembling the Montana Freemen. That’s an offshoot of something the Southern Poverty Law Center (an authority on U.S. hate groups) calls the “antigovernment patriot movement.” LeRoy M. Schweitzer led this group of sovereign Christians who claimed that they were not bound by the rules and laws of the U.S. government.

Here’s how that ended, according to the SPLC:

“In 1996, [Schweitzer] led a heavily armed antigovernment group called the Montana Freemen before he was arrested that March 25 in an FBI ruse on a piece of land he called ‘Justus Township.’ His arrest prompted 16 other members of the Freeman group, who believed the government had no authority over them, to barricade themselves in a 960-acre ranch compound in Jordan, Montana. They held FBI agents at bay for 81 days before finally surrendering without firing a shot.”

What’s most fascinating about Far Cry 5 using the Montana Freeman as a source of inspiration is that the nature of American Western extremism makes them feel like an anomaly that your average U.S. citizen feels no responsibility for. At the same time, you can examine a wider American attitudes on race, guns, and religion through the prism of the Freeman.

Why not the Midwest or the South?

I think it’s worth examining why the West works better in a Far Cry game than the Northeast, South, or even the Midwest. I don’t know if Ubisoft ever even considered any of those other options, but the point is that Far Cry fits well with its newest setting on multiple levels.

You could do a Far Cry-style game in other parts of the United States. Maybe with organized crime in New England, the KKK in the South, or the Michigan Militia in the Midwest. But all of these don’t work as well as Montana and the sovereign-citizen movement. New England and organized crime is too urban. The Michigan Militia could work — that’s an ongoing paramilitary group that was founded to stand against the federal government. That’s similar to the Freeman, but it doesn’t touch as much on religion. Additionally, the idea of personal sovereignty doesn’t bubble up in Michigan and the Midwest in quite as many ways as it does in the West.

But what about the South? You would think that the Klu Klux Klan would make a clear, easy villain (you could argue that it would be too easy and obvious, but that’s never hurt the Nazis as game villains). But setting a new Far Cry in the South with the KKK presents a couple of problems. The first is structural. Far Cry is a game about exploring a dangerous environment teeming with armed enemies stationed at compounds and outposts. And that’s just not how most Americans view the KKK. The popular culture understanding is that this white-supremacy group operates in conjunction with small towns. And when needed, prominent members of that white community put on robes and a hood and use violence to scare away minorities from trying to integrate.

Taking that understanding of the KKK and trying to fit it on top of the Far Cry model could make people roll their eyes and think that Ubisoft is overreaching. Neo-Nazis and the KKK certainly do have compounds, but it’s not really how most people imagine those groups.

But the KKK doesn’t work for a far more fundamental reason. America is still dealing with repercussions of the Civil War, the end of slavery, and end of segregation. For a reminder of that, look to the fervor this past week over New Orleans removing public statues of Confederate figures such as Robert E. Lee. New Orleans mayor Mitch Landrieu had to give an incredible and eloquent speech directed at critics who claimed he was trying to erase the city’s history.

We’re still litigating the crimes of the Confederacy 150 years later.

Presenting the South as a harbor for an active, armed paramilitary hate group would derail any attempt that the game or critics would make at using this as a platform for discussion. Many Americans would see a game like that as an attempt to paint the entire South as violent racists, and most would dismiss it with the equivalent of a “not all men” argument. If they’ve never attended a Klan rally and they don’t know anyone who has, they can say that the game is fantasy — without dealing with any other issues it may attempt to challenge.

Americans have no problem, however, separating themselves from a group like the Montana Freeman. Those are just kooks living in the hills and collecting guns because an M16 is going to do them a lot of good against the Air Force’s F-22 Raptors.

And because we all think that these backwoods cults are crazy is why it could work.

Why the Mountain West?

When the rumors first started to leak out that Far Cry 5 was coming to Montana, some fans jumped to the conclusion that we’d get a game set in the old Wild West. That assumption makes a lot of sense because what is distinguishable about modern Montana compared to cowboys and settlers and frontier towns? Are we going to spend most of the game shopping at Walmart and driving up and down empty highways?

That’s the power of the Wild West narrative, and it is a history that lingers over Western states today. For example, my home of Colorado was the first to legalize marijuana. That might sound like a progressive move, but Colorado was able to do that because it has a provision that enables voters to amend its constitution with a popular vote of the people. That’s something that most states in the South or East don’t have, but it’s common in Western states like California with its ballot initiatives. That’s based on a strong belief that the people are in charge of themselves. That’s a more hardcore version of the American system of government that claims it is “by the people and for the people. That idea is a backbone of the sovereign-citizen movement’s belief that “each man is his own king.” And all of that has a foundation in a time when people would move West in an effort to escape the government and start something of their own — which is the quintessential Wild West story.

But while the Montana Freeman might hate and disregard the federal government and most people think groups like the Freeman are wackos, the West’s history of emphasizing personal freedoms is key to enabling a game like Far Cry 5 to work without coming across as a criticism of everyone in the United States … even though it could be. Because the extremism that manifests in Montana, Colorado, Utah, Nevada, Texas, Arizona, and elsewhere is still all-American.

Let’s take another look at the teaser art for Far Cry 5. 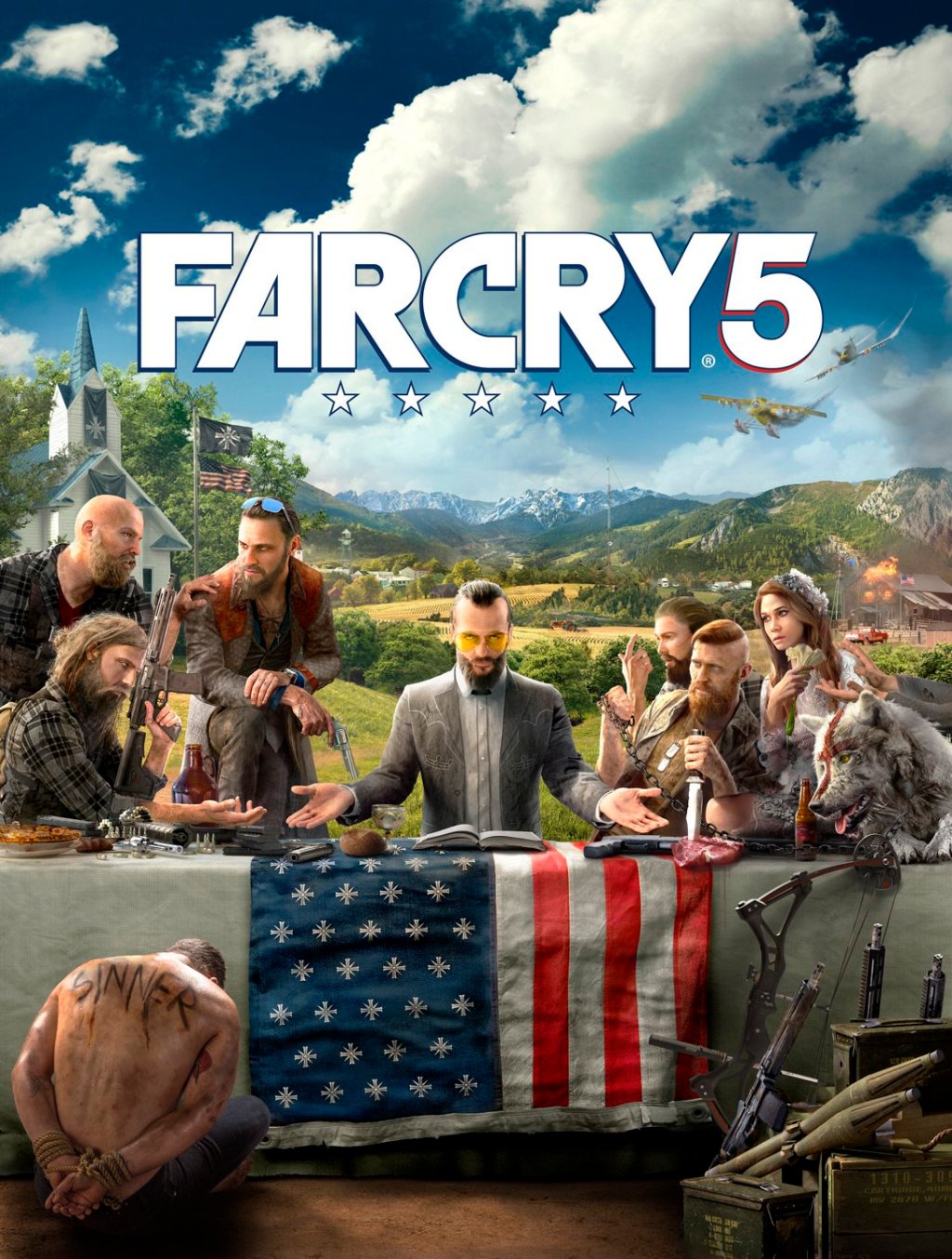 All of the following is true about that image:

Bringing a game like Far Cry into the heart of American extremism is impossible to do right without examining issues of white supremacy, the Second Amendment to the Constitution, or the separation of church and state. Ubisoft is suggesting that Far Cry 5 will deal with all of those (or at least use them as set dressing to make a throwaway narrative appear more important). And that’s impressive because those are all fundamental issues that we are dealing with across every aspect of American culture.

The Freeman were a white supremacist group, but the country is also coming to grips with the reality that the criminal justice system perpetuates white supremacy. The Branch Davidians in Waco bought copious amounts of weapons, but the National Rifle Association continues to fight to enable anyone to purchase a firearm without any effective restrictions. And the Fundamental Church of Jesus Christ of Latter-Day Saints may force minors to enter into polygamous relationships with older men, but far more mainstream religious organizations want to ban women from choosing an abortion — and men in Colorado Springs take their daughters to “purity balls” in an effort to use religion to have control over their children’s bodies.

Far Cry 5 will probably still inspire backlash, but Ubisoft has found a way to use white supremacy, gun laws, and Christian extremism in an authentic and fair way by identifying the group that most people consider radical or “other.”

Now, will Ubisoft capitalize on this opportunity and have something to say about extremism in America? I hope so, but I doubt it.