Six days. That’s how long I survived Frostpunk’s harsh world until the people overthrew me.

Eliminating homelessness and mining coal for our massive heat-emitting generator only got me so far — my citizens were overworked, sick, and out of food. The early press demo I tried was a short but acute example of the challenges Frostpunk has in store when it comes to PC on April 24. It’s set in an alternate timeline where, in the late 19th century, the world undergoes a new ice age, and you’re in charge of the last city on earth.

As the city ruler, you have to make difficult choices. For example, should you legalize child labor to beef up your manpower, or force people to work 24-hour shifts to keep the city running? These and other questions add a dark twist to the city simulation genre, and Frostpunk creator 11 Bit Studios certainly knows how to craft anxiety-inducing decisions.

In 2014, the Polish developer released This War of Mine, which was about helping a small group of people survive the aftermath of a brutal war. It was the company’s first attempt at making a game about testing a player’s morality. Frostpunk builds on those moral quandaries by dramatically increasing the stakes.

It gives you the unenviable task of keeping hundreds of people alive, a number that’ll only grow as your city becomes more civilized.

“It’s all about your choices: You can be a good leader or you can be a bad leader. But it’s not as black and white as you’d think because if you’re a good leader and you listen to your people, the people may not always be right. So this is why we thought this could be a really thrilling idea for a game. It shows how morality can be grey rather than black and white,” said partnerships manager Pawel Miechowski.

The idea for Frostpunk actually predates This War of Mine’s development. Originally, 11 Bit Studios made a prototype for a city simulation game called Industrial. But as with the company’s other games, Industrial went through a long process of iteration, to the point where the final game is completely different from the prototype.

The developers created a stark, frozen world for Frostpunk because they wanted a setting that’d be dire enough to push society to its limits. They were partly inspired by Polish sci-fi author Jacek Dukaj and his book “Ice,” an alternate history tale about a continent that also faces its own endless winter.

The psychology of survival

Making another game about the complexity of human behavior wasn’t an accident. According to Miechowski, the team wanted to explore those themes because they realized that most games were about fun and entertainment and lacked “serious substance.” The hunger for more dramatic experiences only grew as they got older (many are in their late 30s and 40s), which eventually led them to create This War of Mine and its expansions.

Along with other indie hits (like Papers, Please, and That Dragon, Cancer), This War of Mine helped usher in a new sub-genre that’s geared toward a mature audience.

“We’re focused on creating serious, thought-provoking games. I wouldn’t say they’re sad, depression simulators like This War of Mine, but something that makes you think even when you stop playing. These are the kind of games we want to create and we feel good about this philosophy,” said Miechowski.

Like This War of Mine and the real-world conflicts it’s loosely based on, Frostpunk’s dystopia is partly grounded in reality. This is where the team’s sociological and psychological backgrounds came in handy, especially for lead designer Kuba Stokalski (who has a master’s degree in psychology).

“We looked both into stories of extreme endurance (early Arctic and Antarctic exploration, the case of Joe Simpson, Uruguayan Air Force Flight 571 or the horrid accident of Aron Ralston) as well as more systemic research on how the human psyche performs under long-term duress when survival is at stake — psychological aspects of living on the International Space Station, or being posted to Antarctic research bases among them,” Stokalski said in an email.

“All of this yielded a lot of data, but we still had to distill it into playable systems. … We were able to abstract from data those aspects that we felt were both universal, true to the subject matter, and were fertile ground for gameplay systems that felt fresh and interesting. That’s how our core social system in the game — Discontent and Hope — was born, for example.” 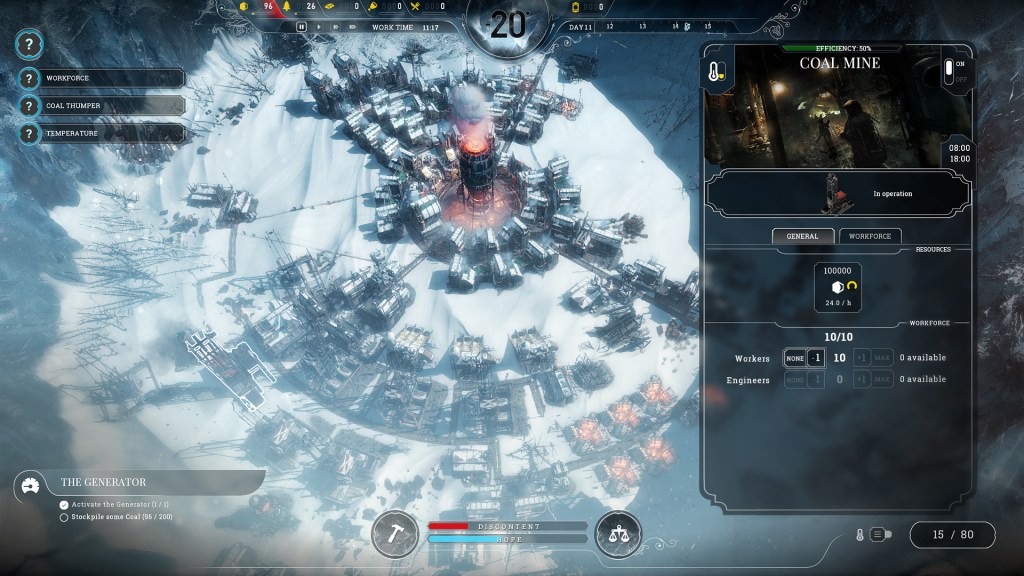 Hope and Discontent (seen as two bars at the bottom of your screen) are a quick way of gauging how your citizens feel at any given moment. Hope is the population’s morale, how confident they feel about you and their chances for survival. Discontent rises when the people are angry about the laws you’re passing or the way you handle delicate situations (like starvation and rioting in the streets).

A low Hope bar paired with high Discontent is a formula for disaster: People will grow so frustrated that they’ll overthrow you, thus ending the game. You have to find a way to balance both Hope and Discontent as you deal with a variety of social and economic challenges.

When it came to designing all the possible laws and decisions a player could make, the developers found inspiration in a curious social phenomena called creeping normality.

“Invoked in critical thought since before Aristotle and more recently famously formulated by Jared Diamond, it provides a powerful metaphor for how people accept small decisions that change the status quo only to find themselves in deeply undesirable situations down the line,” said Stokalski.

“The rise of tyrannies of the twentieth century are the most stark examples and a lot of our decision-making mechanisms are designed around asking the player what small concessions they’re willing to make in order to ensure survival — and showing our interpretations of the consequences of such a process.” 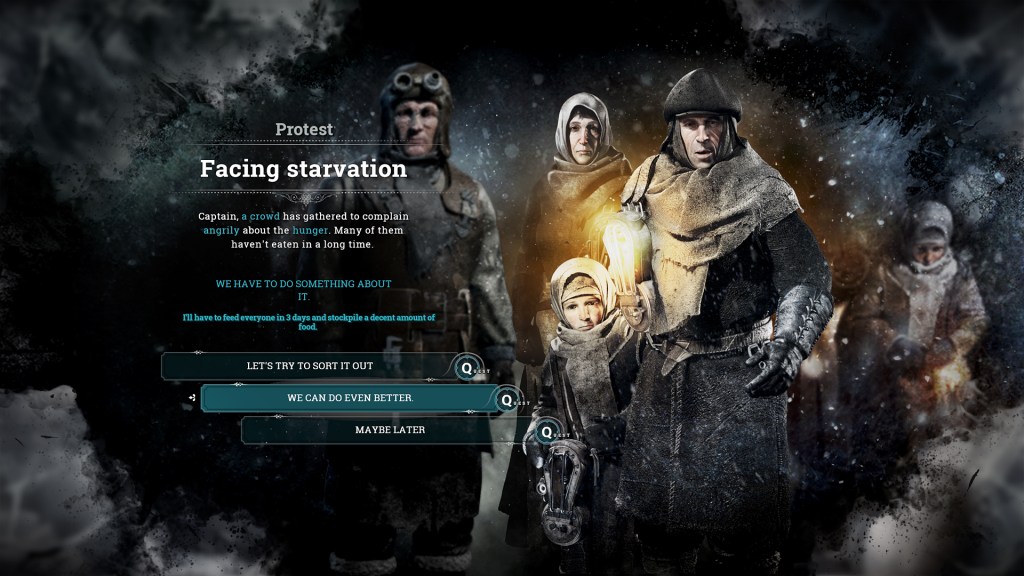 Providing food, shelter, and heat is your main priority at the beginning of the game. But as your post-apocalyptic city moves past those needs — and develops sophisticated technology and buildings — Frostpunk’s more advanced systems start to open up.

No matter how good of a leader you are, you’ll never satisfy every person with your choices, and some of them will even form resistance groups. At this point, you’ll have to make what 11 Bit Studios describes as an irreversible choice, a radical method of unifying your fractured society. So far, the developer has only revealed the Order and Discipline option, which allows you to become a dictator and use aggressive force to keep people in line.

“We felt that when talking about survival on a social scale (as opposed to survival of individuals), systems such as communism or fascism show how extreme situations can easily lead to extreme measures. … This is the ultimate question of the game that we want to leave the players with: Is survival worth it no matter the cost? In times of growing social friction worldwide, we feel that it’s a very pertinent subject to explore,” said Stokalski.

Whether you choose to go down the road of totalitarianism is up to you. That’s what makes Frostpunk so intriguing: It puts your back up against the wall and asks what kind of leader you’ll be. It’s an elaborately crafted mirror for the human psyche, the trolley problem writ large. On some level, we all want to believe we’re decent people. But whether that’d hold up in a dying world where humanity is struggling to survive, well … you’ll just have to find out for yourself.

“If you ask a player to choose between gameplay gain and maintaining his self-concept (the way we view ourselves, a topic explored by famous researchers such as Carl Rogers or Manford Kuhn) a powerful dilemma forms,” said Stokalski.

“Most of us view ourselves as good people. But will you sacrifice gameplay progress, even success, to remain a decent person as a player? This War of Mine exploited that to great effect when asking if you’re willing to steal from the elderly, and you can expect many choices along this line in Frostpunk.”