If it seems like Microsoft is de-emphasizing the importance of owning an Xbox console to play its games, that’s because the company cares way more about its digital platform and about a box that sits next to your TV.

Xbox Live, not Xbox One or even the souped-up Scorpio, is the central pillar of Microsoft’s gaming strategy, Xbox boss Phil Spencer said in a presentation to investors on Thursday. Spencer sees Xbox Live as the social network that kickstarts consumer interest in spending money on Microsoft’s content. And while that might’ve happened primarily on the console in the past, he wants Xbox Live at the center of the gaming experience across any device with a screen.

“So for us at Microsoft when we thought about our path forward, we said we came from a place of console, we came from one device,” said Spencer. “But we really started looking at the assets that we had in our business, and we realized that obviously the number one asset that we have is our customers, and the engagement that they put into our network that is Xbox Live.”

As an example, Spencer talked about how Xbox Live use goes way up after school hours in the United States. He explains that kids will hop onto the service and immediately start talking with their friends before jumping into games. And he says that is one of the key drivers of spending.

“And of course it starts to drive commerce,” said Spencer. “And once you start getting the commerce flywheel going, a magical thing happens. New content developers come into your cycle and start bringing new games to your network, and the cycle starts all over again. New hits get created in your flywheel, and the flywheel accelerates.” 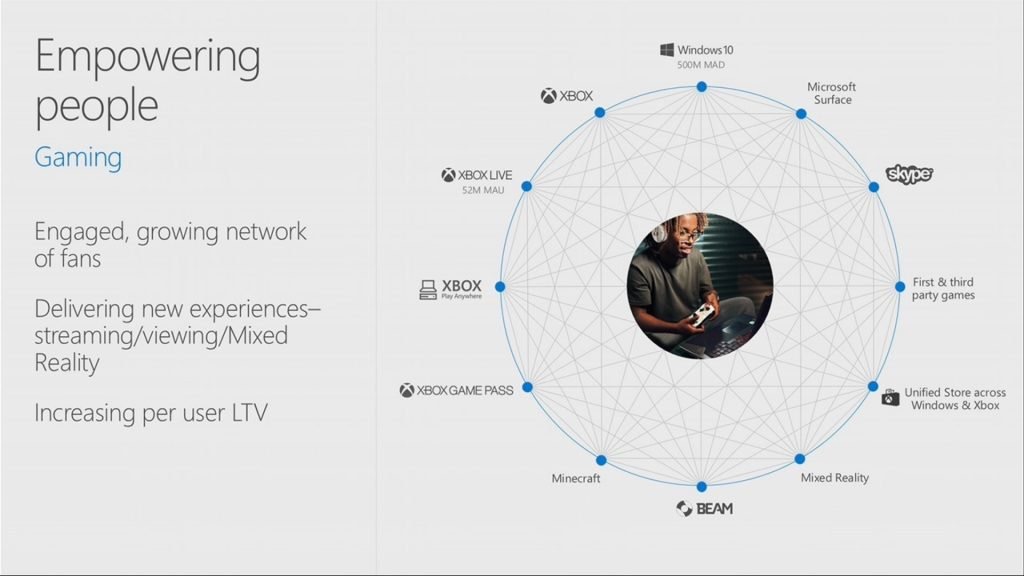 Above: The interconnected gaming strategy.

Microsoft has 52 million monthly active Xbox Live users, and that number has gone up in recent years not only due to the success of Xbox One but also because Microsoft has incorporated the service into Minecraft. Even as Microsoft is introducing programs like Xbox Anywhere that lets players access Xbox One games on PC, every platform is growing in terms of the number of Xbox Live players.

“We have more engaged console players than we’ve ever had, but we also have more engaged PC players,” said Spencer. “And frankly getting our own Windows customers to connect to our own gaming service should just be table stakes for us.”

Of course, getting Windows owners to adopt Xbox Live is quite tough. Microsoft’s scars from attempting a similar strategy with its Games For Windows Live program last decade are still healing. PC players expect a certain level of openness and freedom, and it’s something they get from other services like Steam — and Xbox Live and the Windows Xbox Store are still far behind in terms of winning over skeptical PC gamers.