Nvidia revealed its next-gen RTX video cards in an event on Monday, and it has spent the rest of the week taking preorders for the cards that launch September 20. But enthusiasts that jumped at the chance to get in on the new chips from Nvidia found an unpleasant surprise when they saw the price that they would actually have to pay.

While Nvidia boss Jensen Huang said that the RTX family of GPUs would start at $499 for the RTX 2070, $699 for the 2080, and $999 for the 2080 Ti, you can’t really pay those prices at the moment. Instead, you have to pay around $1,200 for the 2080 Ti, for example. Nvidia is justifying this by primarily selling the Founder’s Edition version of the cards that come overclocked out of the box for the first time ever. 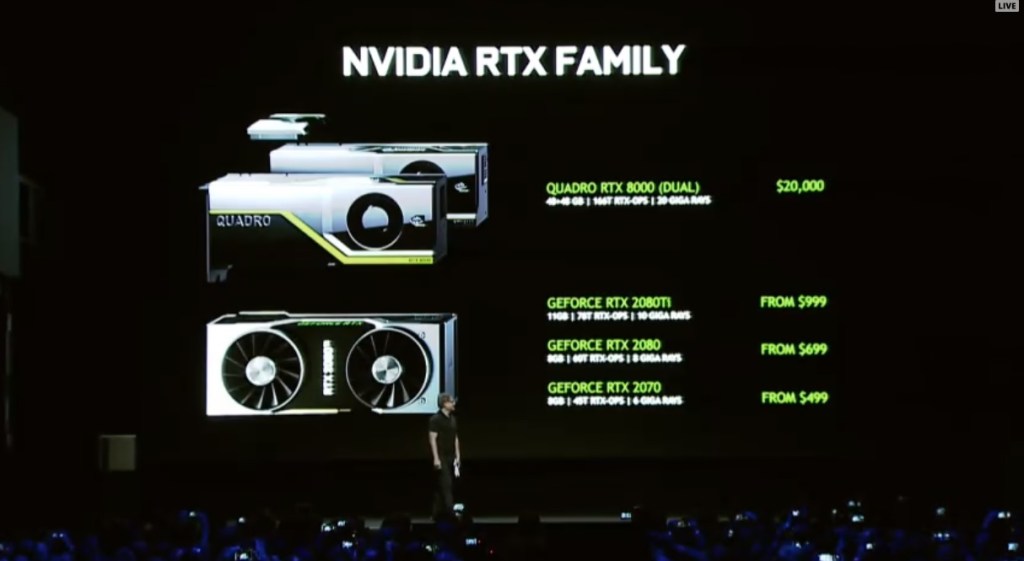 Above: The word “from” is a tricky little thing.

But if you’re wondering when you can get all of the still questionable benefits of ray tracing and additional horsepower of a 2080 or 2080 Ti at the promised price, the answer is “some day.” That’s vague, but I can tell you that day is after the launch of the cards.

Nvidia may eventually sell the cards at that lower price, but we know that third-party vendors will. Asus has already announced its RTX 2080 Turbo and RTX 2080 Ti Turbo that will sell for $699 and $999 respectively (as PC Gamer first spotted). It even uses a blower fan, which has benefits in smaller, cramped cases.

Asus didn’t provide a release date, but you can expect this card and similar custom packages from other vendors to start rolling out closer to the announced prices whenever the Founder’s Edition models sell out.

So now is a good time to have some patience. I’m confident that the new RTX cards are significant improvements, but I wouldn’t preorder one until we start getting some real-world testing and benchmarks. And the longer you wait, the more likely it is those still-powerful 10-series cards will drop in price. And if you’re on a 770 or something, moving to a 1070 or 1070 Ti for less than $300 is a huge boom-for-your-buck upgrade that you can feel good about.