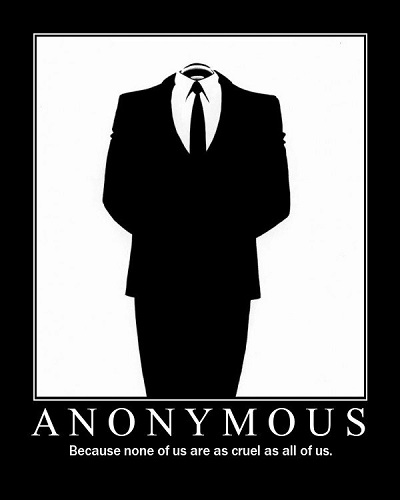 The Anonymous hacker group claimed Sunday that it had stolen a small number of internal passwords and user names from an Apple server.

The data was reportedly stolen from a server used for Apple’s online surveys and did not belong to Apple’s own customers. It was publicly posted on a file-sharing web site, pastebin.

Anonymous claimed responsibility for the attack. It is reportedly working closely with hackers who belonged to Lulz Sec, the hacking group that said it was disbanding last week after 50 days of hacker havoc that included hacking sites such as PBS.org.

The breach at Apple exposed 27 internal Apple usernames and passwords. We’ve sent an email to Apple asking for comment.

On Twitter, Anonymous said Apple could become a target, but for now the members were busy with other hacking targets. “Apple could be target, too. But don’t worry, we are busy elsewhere,” the group said. Earlier this month, Lulz Sec claimed it had breached Apple’s iCloud servers, which operate the company’s cloud music and photo service. But the group posted no evidence of the hack.