Black Hat and Defcon organizers have serious reasons to smile.

The two hacker and security conferences, with Black Hat the more corporate of the two, blew away previous attendance records, organizers told VentureBeat. Defcon, held at the Rio hotel, ended Sunday; and Black Hat, held at the nearby Mandalay Bay hotel, wrapped up Thursday. Over 9,000 security executives, hackers, academics, and spies attended Black Hat this year, up from 2013’s 7,500. As for Defcon, nearly 16,000 attended, up from last year’s 12,000.

For example, the feds were noticeably absent from Defcon. Almost. No reps from the NSA or FBI were onstage, and the feds who did attend were more low-key this year and kept a covert profile, as it were. Defcon founder Jeff Moss told VentureBeat that Defcon and the feds had entered into a cooling-off period.

That’s not because the feds didn’t want to be there, officially at least. Moss said the feds failed to come up with a viable program that would have kept the crowd interested in what they were up to. Instead, the feds seemed to be circling the wagons, figuring out their next moves, Moss said.

“There weren’t that many submissions this year. There wasn’t a ‘let us tell you about the cool stuff that were doing at X.’ I could have gotten what they wanted to do [at Blackhat] from their webpages,” Moss said. (See my story on this from earlier this week here.)

It was slightly different at Black Hat. Dan Geer, the chief information security chief from In-Q-Tel, the CIA’s main venture capital arm, which invests in technology to be used by the agency, gave the keynote at Black Hat in a talk titled “Cybersecurity as Realpolitik.” Geer gave his vision of the future of security to a standing room-only crowd at the Mandalay Bay.

You can see an overview of the Black Hat experience last week here.

In another bright spot, Black Hat organizers donated $50,000 to the Electronic Frontier Foundation (which, among other things, fights for privacy rights online) and awarded 120 scholarships.

Black Hat now takes its show on the road to Europe. 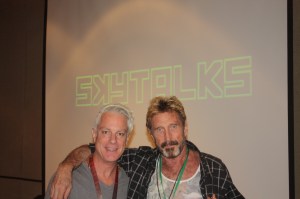 There were a few surprises. John McAfee, the antivirus pioneer and international outlaw who reportedly killed his neighbor in Belize for poisoning his dogs and fled to Guatemala (where he was arrested by the military there and then deported to the U.S. two years ago), showed up to Defcon and regaled the standing room-only crowd with tales of being shaken down by the Belize government — and then fleeing the country with a Vice magazine editor in tow.

Hecklers loudly punctuated McAfee’s speech, but that didn’t matter to him, a hero to many and tawdry freak to others. Wearing a short-sleeve beach shirt and sporting a tan, McAfee used the occasion to announce his new startup, the Brown List, which will take complaints by “ordinary folks” and help them get justice.

At one point, McAfee asked the crowd if there was anybody in the room who “has never felt anger.” When a woman in the back sheepishly raised her hand, McAfee told her that he wanted her to stick around after the talk for a face-to-face.

Apparently worried about his safety, McAfee’s security acted like TSA screeners, searching the people who stood in a massive line for autographs and photos.

Another surprise this year was news that the feds, likely the NSA, seem to have put the screws to two Carnegie Mellon University computer science researchers who were set to give a talk at Black Hat on how adversaries could “de-anonymize” the secure communication platform Tor for under $3,000. VentureBeat reported on how pressure from the feds appears to have killed the chat. (Read my exclusive here.)

As for feelings between the feds and Defcon organizers, the sometimes precarious relationship will likely improve in time. The only official fed talk this year at Defcon was by the chairwoman of the Federal Trade Commission, Terrell McSweeney, who showed up after announcing a “Zap Rachel” robocall hack challenge along with $17,000 in prizes.

Moss said his door was always open to the feds.

“We’re waiting for the FBI, NSA to figure out ways to engage with the community instead of pissing guys off. We never said, ‘Hey, don’t come back.’ There’s weird tensions, and it’s time to think it through,” Moss said.

“At this point, people have had time to digest it. If the feds want to do something, they need to really think it through. If they want to engage, they need a plan.”