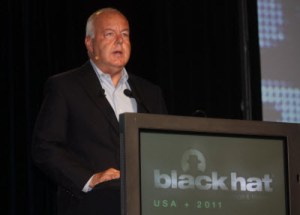 Joseph “Cofer” Black, a counter-terrorism expert who anticipated the 9/11 attacks, warned security technology professionals today that they should prepare for cyber war and be prepared for the notion that no one will believe them when they sound the alarm about such a war.

Black warned that cyber security professionals who sound the alarm about a coming onslaught of cyber attacks will likely be met with disbelief. He said they should be prepared to deal with that when it happens. Speaking from personal experience, Black said the toughest thing about predicting terrorist attacks was getting people in power to take the predictions seriously and to do something about it. He predicts the same kind of fate will befall cyber security professionals who are trying to ward off hostile cyber attacks.

“Validation of threats will come into your world,” Black said. “There is a delay to that validation. This is the greatest issue you are going to face.”

Black (pictured), who is currently head of Total Intelligence Solutions, a subsidiary of private-security firm Blackwater Worldwide, spoke at the opening keynote speech at the Black Hat security conference in Las Vegas, where as many as 8,500 attendees are expected. Black is a 28-year veteran of the Central Intelligence Agent and was one of the counter-terrorism experts who warned about a pending terrorist attack in August, 2001, before the 9/11 attacks.

Now, some experts are predicitng that Al Qaida is on the verge of collapse. Black doesn’t buy that, and he thinks it is human nature to disbelieve warnings about things where there is no personal experience or precedent.

He said the Stuxnet attack is “the Rubicon of our future.” That’s a reference to the likelihood that a nation was behind the malware dubbed Stuxnet that attacked and brought down some of Iran’s nuclear centrifuges, which were reportedly being used to make atomic weaponry. Accordingly, the fire alarm klaxons went off at the Black Hat conference at Caesar’s Palace. Every year, some prankster pulls the alarm at the hotel.

He went on to say, “Cyber will be a key component of any future war. We are moving from the Cold War to ‘code war.'”

The overhead speakers responded, “Please return to your normal activity. We apologize for the inconvenience.”

Black said that the problem with cyber warfare is the “false flag,” where countries responsible for cyber attacks will be able to plausibly deny responsibility or otherwise shift the blame to a rogue element.