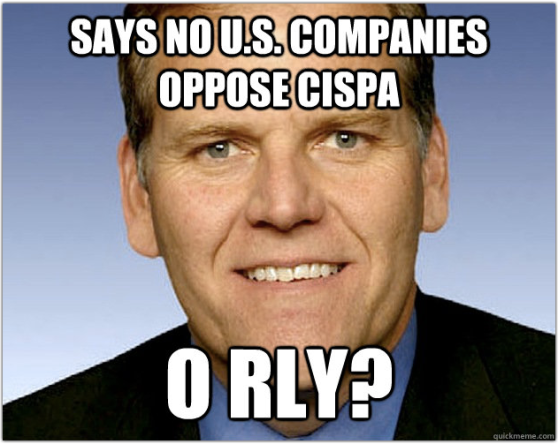 While the House of Representatives debated the controversial Cyber Intelligence Sharing and Protection Act (CISPA) today, one of the bill’s authors claimed that they have not found any U.S. companies who oppose CISPA.

I suppose no one there has heard of Reddit.

“Well, after falsely dismissing us as ‘14-year-old tweeters in basements‘ — it doesn’t surprise me that [Rep. Mike Rogers (R-Mich.)] would have the audacity to make another false claim when a U.S. company like Reddit has opposed CISPA from the start in order to protect the privacy rights of its 64 million monthly users,” said Reddit cofounder Alexis Ohanian in an e-mail to VentureBeat today.

Rogers said on the House floor that “we have yet to find a single U.S. company that opposes this bill” after explaining that those behind CISPA have spoken with privacy groups, technology companies in Silicon Valley, financial institutions, and others regarding its content. He went on to name IBM, Intel, Juniper, Oracle, and EMC, as supporters of the bill.

But this is incorrect. Major companies such as Reddit, Firefox browser creator Mozilla, WordPress’ parent company Automattic, and others oppose CISPA, according to the Electronic Frontier Foundation, who provided us this Fight for the Future letter. These aren’t just small names in the technology industry, either, and they certainly count as U.S. companies.

“Rep. Rogers apparently hasn’t been looking very hard,” said Dave Maass, a spokesperson for privacy group the Electronic Frontier Foundation in an email to VentureBeat. “If he checked his Twitter account, he’d see that Craigslist, Reddit, Namecheap, Mozilla, and Automattic are all opposed to CISPA. Rep. Jared Polis perhaps put it best when he said that CISPA will shake the confidence of Internet users and without that trust, all Internet companies will suffer.”

CISPA’s intent is to help private companies share cyber-security event information with the government. The bill’s authors say that the military will by not means control the information that comes through CISPA’s channels. They also stress that the only information coming through are “1s and 0s” and that if any personal information slips through it will be “knocked out,” in the words of Rep. Dutch Ruppersberger (D-Md.).

Privacy groups and companies such as the one above oppose CISPA, however, saying that the bill uses too broad of language and poses a threat to individual privacy. Yesterday, the White House said it would veto the bill in its current state, fearing that companies would be given too much leeway in sharing private information and should be held accountable for the information it hands over.