This move involves extending existing Google privacy and security features to additional Google products as the internet giant looks to bring more uniformity to its various services, and covers incognito mode, auto-delete, and an expansion of its password checkup tool.

After adding incognito mode to the YouTube mobile app last year, Google announced at its annual I/O developer conference back in May that incognito mode was also coming to Google Maps — and today the rollout becomes official.

Echoing the incognito mode that has been baked into Chrome for more than a decade, Google Maps will now allow users to temporarily prevent activities being saved to their Google Account — including searches for places and routes traversed. The feature can be activated through the main menu that sits behind a user’s profile photo and will be rolling out to all Android users throughout October, with iOS following.

“Incognito mode has been one of our most popular privacy controls since it launched with Chrome in 2008,” noted Eric Miraglia, director of product management at Google’s privacy and data protection office, in a blog post.

A few months back, Google announced a new tool that allows users to automatically delete their location history data, as well as their search and browsing activity. The company said at the time that it planned to expand auto-delete to additional Google products, and today the feature is coming to YouTube search and viewing history. This means you can now have YouTube automatically delete your history after three or 18 months.

There’s a strong argument for including shorter time frames, such as 24 hours or one week, but for many people this will be a good start. 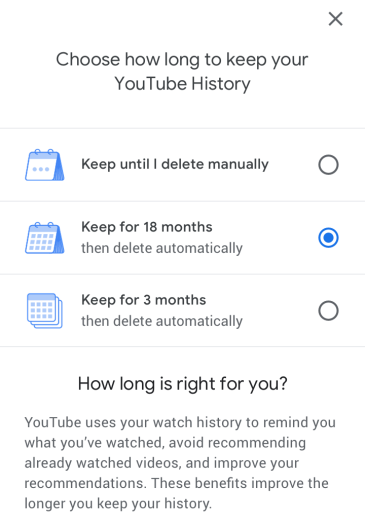 It makes sense that Google is expanding existing features to additional services, because a lack of consistency in product design can confuse consumers. Why have incognito mode in Chrome and YouTube but not Maps, and why offer auto-delete for location data but not viewing history?

“Making these controls consistent across our core products is important because they’ll become more familiar and, we hope, even easier to understand and use,” Miraglia added.

Google’s continued privacy push comes amid growing scrutiny over the role big tech companies play in society — covering everything from election interference to tracking users through their phones and other smart devices.

Back in August, Google confirmed that some of its contractors listen to people’s recorded conversations with Google Assistant in order to improve support for more languages, accents, and dialects. Apple was also discovered to be carrying out the practice, and the two halted human-led voice data reviews following public backlash. The underlying issue, however, may be less the practice itself than the lack of transparency.

This is a problem that dogs all the big tech companies, from Google to Apple, Facebook, and Amazon. Do consumers really know how their data is being used? Regulators are increasingly finding that most don’t — back in January, the French data privacy watchdog fined Google $57 million for a “lack of transparency, inadequate information, and lack of valid consent” with regard to the way it personalized ads. In the U.S., Facebook came to a $5 billion settlement with the Federal Trade Commission (FTC) over various privacy violations.

To boost transparency and give users more controls, Google is also adding new smarts to Google Assistant. Now when you ask privacy-focused questions, such as “Hey Google, how do you protect my data?,” Google Assistant will share some generic information about how it does so.

There are limitations to this new feature, however. To erase more than a week’s worth of data, users will need to follow instructs and manually delete the data from their account.

This feature will be available first in English, with other supported languages following in November.

In a separate announcement today, Google revealed that it’s baking a password checkup tool directly into the password manager in all Google accounts.

The company made the announcement to coincide with Cybersecurity Awareness Month, an initiative launched by the U.S. Department of Homeland Security more than 15 years ago to promote awareness of all things related to online security.

Back in February, Google launched a password checkup tool designed to sit inside the user’s browser. If the user enters login credentials for a third-party site and Google detects that the combination is unsafe, it will issue a warning. This might occur if, for example, those same details have been implicated in a data breach elsewhere on the internet.

Google said the password checkup extension has been downloaded more than 1 million times to date. Now the company is bringing the underlying technology to its core password management service that lives inside each user’s Google account.

With one tap, you will be able to check for any weaknesses in your existing saved passwords. The report won’t be limited to known breaches elsewhere on the web — it will also highlight instances in which you have reused the same password across multiple sites, as well as any passwords that are just plain weak. 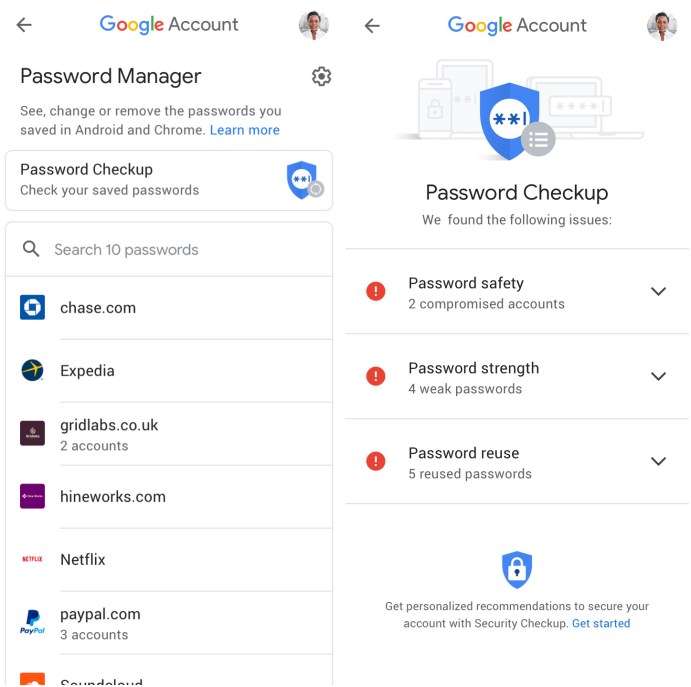 Google also revealed that it will also integrate password checkup directly into Chrome later this year. This will have the same effect as installing the extension, except the feature will be baked right in — so if one of your usernames and passwords has been compromised in a known data breach, Google will show an automatic warning and suggest that you change your password.

As consumers become more aware of how technology companies track them, and as data breaches become more prevalent in the years ahead, companies such as Google will have to show that they’re serious about protecting their users and not abusing their trust.