Last August, the Associated Press reported that various Google apps store the timestamped locations of the devices on which they’re installed. Some of this collection occurs regardless of which privacy settings are enabled — Google Location Services, Find My Device, Search, and Maps continuously record telemetry data. But other entries can be viewed and manually deleted on Android, iOS, and the web, and Google says it’s committed to streamlining the auditing process with new tools.

In the coming weeks, Google plans to roll out a setting that will let users delete location data automatically. From within the Google Account dashboard on mobile and the web, a drop-down option will allow them to select one of two windows — three months or 18 months — specifying how long they’d like to retain data. The control will also cover web and app activity (for example, things searched and browsed in Google services like Discover on Android, Maps, Search, Google Play) and Google says that any older data will be deleted on an ongoing basis. 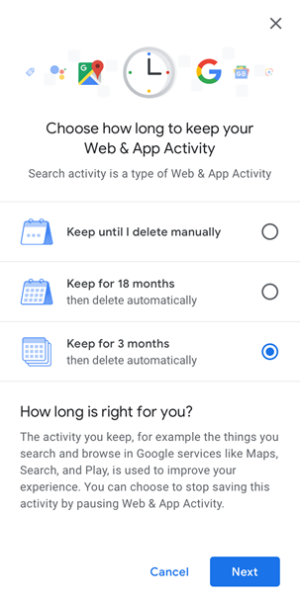 “Data can make Google products more useful for you … [but] we’ve heard your feedback that we need to provide simpler ways for you to manage or delete it,” Google product managers Marlo McGriff and David Monsees wrote in a blog post. “You should always be able to manage your data in a way that works best for you — and we’re committed to giving you the best controls to make that happen.”

In June 2018, Google Account got a makeover on Android. It’s now based on Google’s Material Design language and organizes controls into tabs along the top — Account, Data & Personalization, Security, People & Sharing, and Payments & Subscriptions — and a dedicated support page that links to handy Google forums. Moreover, as part of Google’s Project Strobe initiative, the company said it would roll out a streamlined permissions management view for Google account access prompts; implement a stricter API access policy for the consumer Gmail API; and limit Android apps’ ability to receive call log and SMS permissions on Android devices.

The search giant’s renewed focus on privacy features follows several high-profile headlines over the past year, such as the Facebook and Cambridge Analytica data scandal. A Wall Street Journal report last summer revealed that Google+, Google’s eponymous social network, failed to disclose an exploit that might have exposed the data of more than 500,000 users. Following the news, Google announced that Google+ will formally shut down for consumers in August 2019, following a 10-month wind-down period.