According to the latest revelations from NSA whistleblower Edward Snowden, the NSA can:

The NSA program that does this is called XKeyscore, and it’s a massive big data collection, warehousing, and analysis program that, if we can believe what Snowden is saying, basically lays bare your entire digital self. Essentially, we’re Frodo and Sam, and the NSA is the Eye of Sauron — but more effective, more powerful.

The question is whether or not we can believe him. Those are big, big accusations.

The evidence that Snowden provided to The Guardian is compelling: vast quantities of screenshots that show training materials and actual applications that the NSA has built to enable armchair James Bonds, AKA intelligence analysts, to sort and sift through a vast database of 850 billion events and 150 billion Internet records, with 20+ terabytes being added daily:

Essentially, it’s armchair surveillance via WYSIWYG drag-and-drop menus. If we can believe what we’re hearing.

That “if” is rather crucial.

There are only two ways the NSA could amass such huge amounts of unencrypted data: by intercepting everything at the ISP level and decrypting in almost-real time any HTTPS or otherwise encrypted transmissions, or by having backdoors in dozens if not thousands of companies’ systems to access data on a regular and continuous basis. 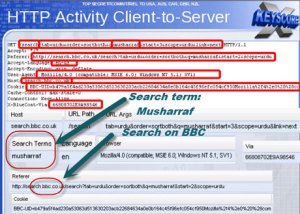 Above: The NSA can, Snowden said, find your IP address by searching for sites you may have visited

In a statement to the Guardian, the NSA denied that XKeyscore was accessible to all analysts and said that it was a “lawful foreign signals intelligence collection system,” but did not deny any of the capabilities Snowden claims it has. And the NSA, which has said that 300 terrorists were captured via XKeyscore as of 2008, defended the value of the program.

“These types of programs allow us to collect the information that enables us to perform our missions successfully – to defend the nation and to protect US and allied troops abroad.”

Until there is a full and public inquiry, we won’t likely know with a high degree of certainty what is true about the NSA and its multiple data-collection programs. That kind of inquiry something that Restore the 4th and other organizations such as the EFF and Fight for the Future have been demanding.

The likelihood of a full public inquiry happening, of course, seems slim.

But there has been one very positive note lately for those who care about privacy, security, and ultimately, freedom. The de-fund the NSA movement just failed — by seven votes — to restrict NSA funding for domestic surveillance programs. Almost half the members of Congress — 205 – voted to pass the amendment, something that must have shocked the president, who lobbied against the amendment, and members of the security establishment.

“The fact that over 200 representatives were in support of the amendment, despite lobbying by the NSA and strong opposition from the White House, sends a really strong message,” privacy advocate Sina Khanifar told VentureBeat a week ago. “Just seven votes in the other direction would have ended the NSA’s bulk collection of phone records — a fact that must be scaring many proponents of the program in government.”