The “hacker” group Lizard Squad has declared it will no longer attack Microsoft’s Xbox Live and Sony’s PlayStation Network, as well as denied claims it had planned to attack Tor, an anonymity network often used to resist censorship. While the former appears to be true, the latter information is quite conflicting.

“So basically, you’re not going to be attacking Xbox and PlayStation anymore, Lizard Squad, correct?” YouTube show DramaAlert asked the group. “That’s correct” was the immediate response. Indeed, multiple sources have confirmed that the cyberattacks have stopped, even though issues continue to persist.

Lizard Squad gained fame this month by attacking Microsoft’s Xbox Live and Sony’s PlayStation Network multiple times, most notably on Christmas Day, resulting in many being unable to play video games online. The impact was particularly large for many reasons.

First of all, the denial of service attack targeted both Xbox Live and PSN, the two largest console gaming networks. Next, the timing was key: Many gamers naturally wanted to play on their day off, whether on an already-purchased game console or on one received as a present for Christmas. Finally, the aftermath of the attack was massive if not greater than the attack itself because the game networks couldn’t handle the traffic of millions of consoles trying to get back online all at once after the attack was over.

Lizard Squad, which has had multiple Twitter accounts suspended but merely creates new ones, then moved on to the Tor encryption service. Here is a sample of tweets, in chronological order:

To clarify, we are no longer attacking PSN or Xbox. We are testing our new Tor 0day.

Hi, do you guys still give away shirts for relay owners? We need about 3000 @torproject

Only hackers, miscreants and pedophiles use Tor.

Meanwhile I've been pounding the pedophile safe harbor known as Tor's website for over an hour. What are you going to do about that?

.@torproject Did you like our little sample? Now imagine 3000 nodes slowly creeping up, from different locations across the world…

Users’ data is passed between Tor relays to make it untraceable. About 3,000 of these routers popped up with the name LizardNSA on December 26. If a single group controls enough of these nodes, they could theoretically track the traffic over them, which would naturally compromise Tor users’ anonymity.

Yet such an attack is not effective unless new relays obtain consensus with the rest of the network. That didn’t happen and thus LizardSquad didn’t get very far.

The Tor Project predicted as much. Here is a December 26 statement sent to VentureBeat:

This looks like a regular attempt at a Sybil attack: the attackers have signed up many new relays in hopes of becoming a large fraction of the network. But even though they are running thousands of new relays, their relays currently make up less than 1% of the Tor network by capacity. We are working now to remove these relays from the network before they become a threat, and we don’t expect any anonymity or performance effects based on what we’ve seen so far.

What this does show us is that Lizard Squad has released conflicting information. Its Twitter bio still reads “I cry when Tor deserves to die.”

Yet in the DramaAlert show, a member states: “There was never an attack on Tor. We created about 3,000 Tor exit nodes and connected them to the Tor network. After we did that, we had several people accuse us of attacking Tor.” 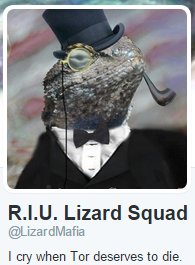 The group certainly didn’t manage to successfully disrupt Tor in any meaningful way, but it certainly sent out messages implying that it was trying, and then took steps in that direction. That was enough to raise some eyebrows.

In addition to hosting three members from Lizard Squad, the latest DramaAlert episode also hosted two members from Anonymous, one member from Finest Squad, and Kim Dotcom. You can listen to the whole clip here:

Among the topics discussed are Anonymous trying to expose Finest Squad as a scam group, Kim Dotcom saving the day by offering premium Mega vouchers in exchange for stopping the attacks on Microsoft and Sony’s gaming networks, as well as a technical discussion of the various attacks between the groups. The best part, in our opinion, comes about two-thirds in, when Dotcom tries to steer the discussion towards why these groups should focus on hacks that don’t tarnish the term “hacker.”

While it can be interesting to hear what some members of these groups believe, it’s important to emphasize that they don’t necessarily represent what will happen next. Objectives and beliefs change, as do the individuals that make up these groups.

We don’t expect Microsoft’s Xbox Live and Sony’s PlayStation Network to be attacked again anytime soon, but that certainly doesn’t mean they won’t be. Even if Lizard Squad never seeks to do so again, another group will, if only to see if Microsoft and Sony have built up their defenses.

As for Tor, this wasn’t the only attempt to attack the network, and it certainly won’t be the last. We can only hope that Dotcom’s words go through to some of these “hackers” and that they might chose to more “worthy” objectives for their next targets.